Could George Lopez Be Arrested for Trump Threat? | Law & Crime

Could George Lopez Really Be Arrested for Comment About Bounty on Trump’s Head? 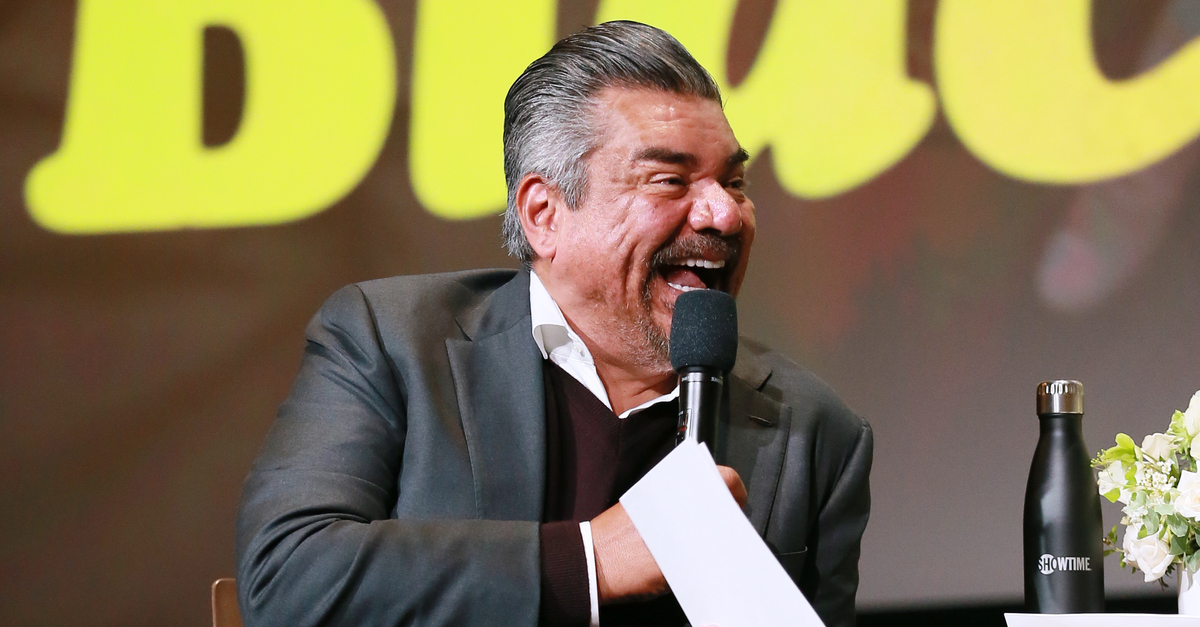 You’d think that people would know by now that making comments or posting content on social media about presidential assassination can get them in trouble. Comedian George Lopez went there anyway.

Lopez on Sunday commented on an Instagram post made by Chicano Worldstar. The original post said that “#Iranian authorities have put a bounty on American President Donald Trump’s head during the televised funeral of General #QasemSoleimani after he was assassinated last week. What are your thoughts?”

[Sidebar: Chicano Worldstar’s post didn’t get the facts quite right. During the funeral procession for Qassem Soleimani, a eulogist and not the Iranian government, said, “We are 80 million Iranians, if each one of us puts aside one American dollar, we will have 80 million American dollars, and we will reward anyone who brings us [Trump]’s head with that amount.”]

In any event, Lopez responded, “We’ll do it for half.” 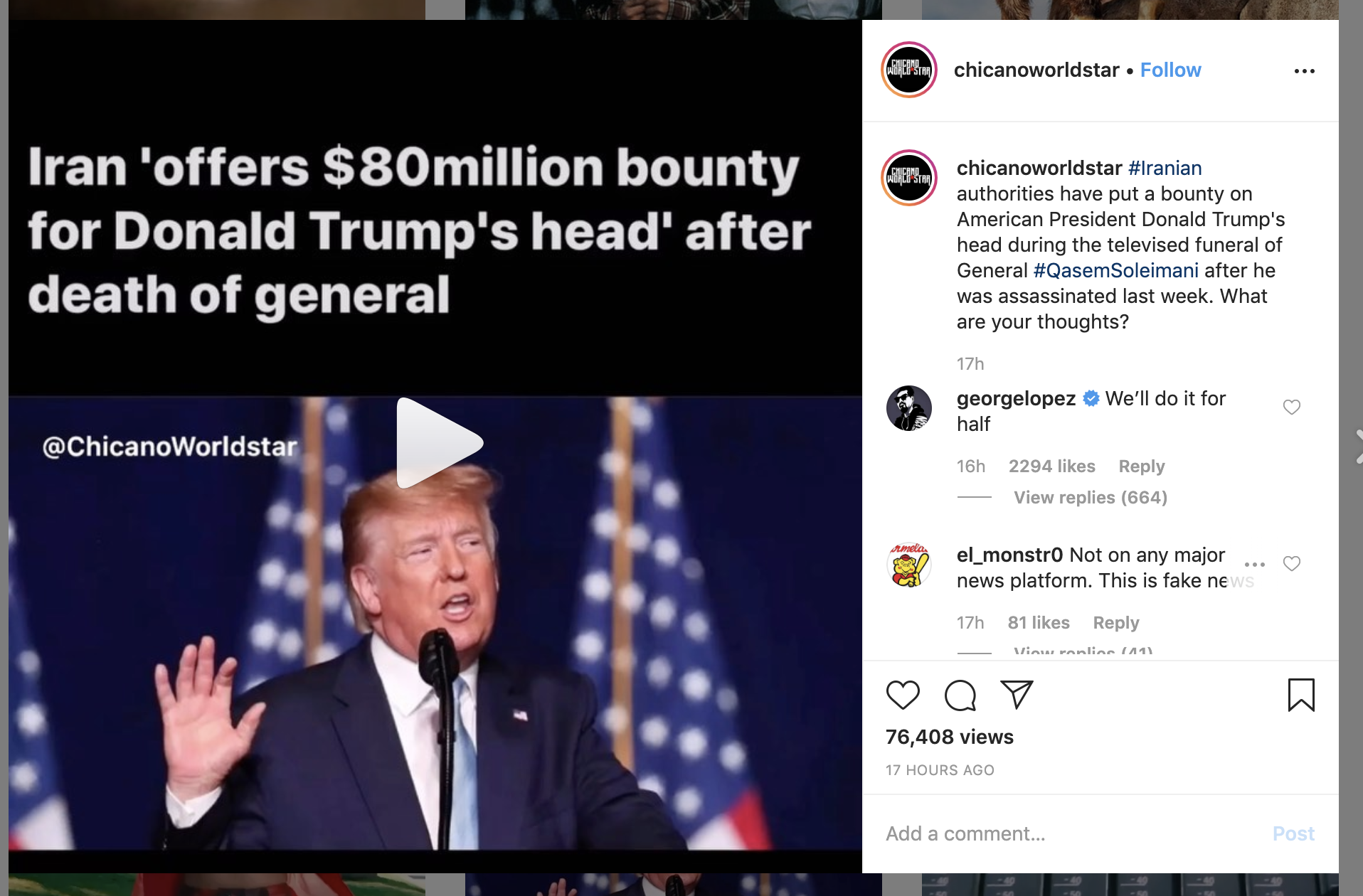 While some said Lopez was clearly joking, others said this was no laughing matter and immediately called for Lopez’s arrest.

RT if you believe the FBI and Secret Service should IMMEDIATELY arrest George Lopez for threatening to murder Trump in exchange for $40 million!

The Secret Service needs to go to this violent lunatic’s house and arrest him. https://t.co/iBvgMBhfH9

Others, including Kathy Griffin — who, as everyone knows, once found herself at the center of a similar controversy — seemed to be quite a bit more comfortable simply chuckling at Lopez’s comment.

Calm down trump cult! @georgelopez is a professional comedian and…OH FUCK OFF. THIS JOKE IS HILARIOUS & you all know it. #impotus #trumpfail #comedy pic.twitter.com/T5QblH07kF

Some are also pointing to a perceived double-standard when it comes to interpretation of celebs’ comments (see: Ted Nugent).

Trumpers are outraged over comedian George Lopez’s joke-Trumpers want PC comedy when it comes to their side but applaud non comedians like Ted Nugent who called for killing President Obama who was then later rewarded for threatening Obama by being welcomed to Trump White House pic.twitter.com/40BDg3O0jz

But now, #ArrestGeorgeLopez is trending on Twitter. Could that actually happen?

Possibly, but not likely. Here is the federal law on the subject:

18 U.S. Code § 871.Threats against President and successors to the Presidency

You’ll notice that the statute outlaws a pretty broad set of communications. Anyone who “knowingly and willfully makes any such threat” to harm the president will have violated the law. There’s no sliding scale or explanatory language within the statute for the severity or seriousness of the threat.

Plenty of people have, in fact, been prosecuted and convicted under 18 U.S.C. § 871 for making threats against a sitting president, and law enforcement agencies investigate thousands of threats each year against top government officials.

But of course, not all utterances amount to “threats.” Whether dealing with potential threats against presidents or anyone else, courts have long interpreted jokes to fall outside the definition of a threat. Two factors are key to determining the difference between a threat and a joke: 1) the subjective intent of the speaker; and 2) whether a reasonable person would interpret the communication to be a joke.

Lopez is a professional comedian long-known for making ethnic jokes precisely like the one in his Instagram comment. Furthermore, the context in which the statement was uttered is relevant. A comment made on social media – a forum in which jokes are commonplace – is less likely to be deemed a “threat” than the same comment made in other contexts. Finally, plenty of folks on social media did get Lopez’s joke — demonstrating that there is ample evidence that a reasonable person might not have interpreted the comment as a threat.

Bottom line: it’s possible that Lopez’s comment might be deemed an illegal “threat,” but given the context, it’s pretty unlikely.  Reasonable people can certainly disagree as to whether a joke is funny or appropriate — but even a bad joke isn’t a threat under the law.

Lopez, however, might find himself having to report for some manner of official investigation on the matter. When Kathy Griffin posed for a photograph showing a decapitated Trump, the Secret Service investigated her despite her having been a well-known comedian. At the time, the Secret Service said, “Each alleged or perceived threat has to be investigated thoroughly.” Rapper Eminem was also paid a Secret Service visit after a TMZ employee reported Eminem’s lyrics for threatening Ivanka Trump. Whether George Lopez will find himself having to report for a similar round of questioning is not yet clear.