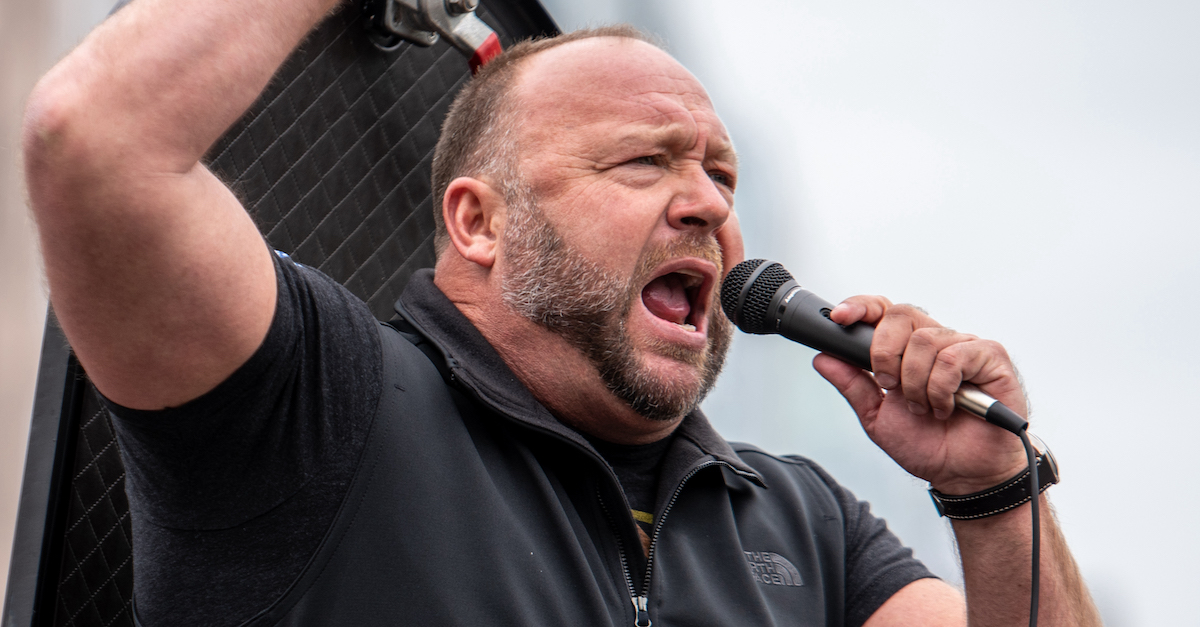 Free Speech Systems LLC, the Alex Jones-owned company behind Infowars, filed for bankruptcy on Friday, according to federal court records obtained by Law&Crime. The case was filed in the Victoria Division of the U.S. Bankruptcy Court for the Southern District of Texas.

The move was entirely predictable given that Jones filed paperwork in a Connecticut state court on Friday to sue Free Speech Systems. The crossclaim — a lawsuit between defendants named in a separate lawsuit — is legally attached to an original lawsuit filed against Jones and several associated companies over comments Jones made about the Sandy Hook Elementary School massacre in Newtown, Connecticut, in 2012.

The Connecticut defamation lawsuit against Jones, et al., is scheduled for jury selection this coming week. Meanwhile, Jones is currently on trial in a Texas state courtroom over several similar defamation lawsuits filed against him in the Lone Star State — his own turf.

The plaintiffs in the Connecticut case immediately asked a judge to rubbish the crossclaim because, in their view, it was “yet another bad faith tactic meant to obfuscate, to delay, and to create a false issue in this record in preparation for a new abusive bankruptcy filing.”

Free Speech Systems reported in a bankruptcy form document that “its aggregate noncontingent liquidated debts (excluding debts owed to insiders or affiliates) are less than $7,500,000, and it chooses to proceed under Subchapter V of Chapter 11.”

Chapter 11 bankruptcies are frequently dubbed “reorganization” cases. They generally allow companies to remain in control of their own operations and do not require companies to liquidate their assets.

Elsewhere, the first form document filed in the matter says Free Speech Systems anticipates having 50-99 creditors. The company says it has assets of “$10,000,001 – $50 million” but anticipates liabilities of “$50,000,00 — $100 million.” It further asserts that “[f]unds will be available for distribution to unsecured creditors.”

A laundry list of creditors is attached; the natures of the various claims are invariably listed as “[t]rade claim[s],” “[l]egal fees,” “[l]itigation claim[s],” and — in one case — a “[p]otential lawsuit for copyright infringement.”

The largest unsecured claim — for $319,148.16 — is listed as being owed to “Elevated Solutions Group,” a Cos Cob, Connecticut entity.

Included with the filing are several financial balance sheets for Free Speech Systems, one of which is reproduced here: 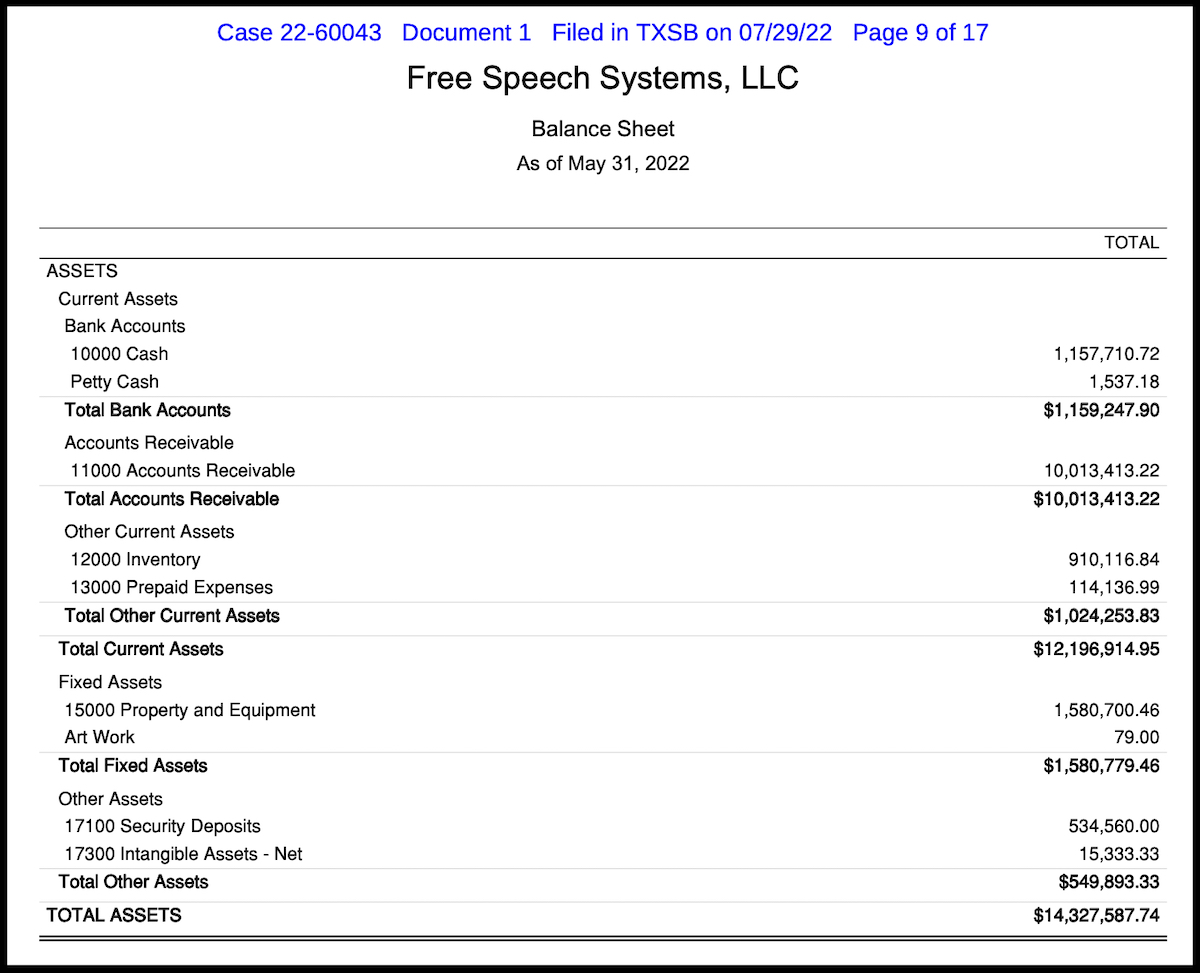 Additional documents show the millions of dollars moving through the company’s coffers.

Yet another filing in the bankruptcy case explains how Free Speech Systems makes its money.

The filing says Infowars.com makes available for purchase vitamins, shampoo, and “other health products.” It also sells “books, t-shirts and other products.”

“The vast majority of FSS revenues comes from sales of dietary supplements which have traditionally been supplied by PQPR Holdings Limited, LLC (‘PQPR’), an affiliated entity,” the document asserts.

Another document attests that “PQPR is managed by David Jones,” Alex’s father.  “Alex Jones is not a manager of PQPR.”  However, in untangling the precise ownership of the associated four-letter companies, the word “Jones” is at one point sprinkled in the court paperwork without a clear sense of which “Jones” is being described:

“FSS has a unique audience that is highly loyal to Alex Jones and purchases products based on Alex Jones’ credibility,” the bankruptcy paperwork continues. “Product sales from Infowars.com stores are a significant source of revenue for FSS. Approximately 80% of FSS’ revenue is derived from product sales. Of the remainder, 11% is historically from advertising and the balance from a variety of sources.”

The interplay of the finances between Free Speech Systems and PQPR is outlined in several paragraphs:

Through its online sales channel, FSS currently sells (i) dietary supplements purchased by PQPR, (ii) dietary supplements purchased by FSS, and (i) books, DVD’s, t-shirts, and other merchandise purchased by FSS. The allocation of proceeds from the sale of products after credit card processing charges varies depending upon which of the above categories the product falls under, PQPR receives a fee for of ten percent of the net proceeds (the proceeds from the sale of the products less processing charges, as a royalty for introducing the supplement and vitamin market to FSS.

FSS relied on PQPR as no other vendor would supply the Supplements for Jones to advertise on his shows. PQPR ordered and paid for Supplements, which it marked up, and then sold to FSS. Jones would publicize the Supplements on his show and FSS and/or PQPR fulfilled the orders to ship to its customers.

As to Non-Supplements, FSS purchased the products, sold them, and fulfilled the sale through its own employees from its warehouse in Austin. Depending on whether a Supplement or Non-Supplement was sold, FSS and PQPR split the cost of the sale on an agreed to formula.

After several paragraphs which explain the details of the interplay between FSS and PQPR, the filing asserts “FSS’s inability to pay PQPR in full for the PQPR merchandise over several years” and says “FSS became indebted to PQPR in a significant amount by 2020.”

The way out for FSS, according to the filing, was this:

On or about August 13, 2020, the Debtor executed that certain Promissory Note in favor of PQPR in the original principal amount of $29,588,000.00 (the “PQPR Note”). A security agreement of the same date granted PQPR a security interest in all of the Debtor’s personal property assets, including but not limited to the Debtor’s tangible and intangible property, accounts, and proceeds derived from those assets (the “PQPR Security Agreement”). PQPR filed a UCC-1 financing statement with the Texas Secretary of State that on November 18, 2020.

Free Speech Systems is asking a bankruptcy judge to allow it to use “cash collateral” to deal with the situation and remain a going concern.

Yet another filing says Jones never brought professional business managers on board to manage Free Speech Systems, which he once co-owned with his then-wife but now owns fully by himself.

For instance, “the 2021 general ledger had not been completed and the books have not been closed, and almost no transactions have been recorded in the 2022 general ledger,” the filing asserts while pointing to the lack of control and governance outside Jones himself.

The filings elsewhere bemoan the de-platforming of Jones’ show from many popular websites, the unwillingness of credit card processors to do business with Free Speech Systems, and the impacts of the Sandy Hook defamation lawsuits on Free Speech Systems.

“The crux of the allegations in these lawsuits are that Alex Jones and FSS employees said or implied that the Sandy Hook massacre did not happen and that the parents were participants in a conspiracy against the public,” one filing asserts.  “As a result of the filing of FSS’ bankruptcy, the Connecticut State Court Litigation has been stayed by the automatic stay provision of the Bankruptcy Code.”

“Subject to Court’s approval, I understand the Debtor intends to pay Critical Vendors only to the extent necessary to preserve its business,” wrote W. Marc Schwartz, the Chief Restructuring Officer of Free Speech Systems, LLC.

One of Schwartz’s filings favorably quotes the Southern Poverty Law Center as a source for biographical information on Jones.  The filing even tells the bankruptcy court that Jones has a “large and devoted audience of far-right conspiracy-theory believers.”

As Law&Crime reported on Friday, the Sandy Hook plaintiffs who are suing Jones and Free Speech Systems in Connecticut have asked a judge to refuse to allow Jones to sue his own company on the following grounds:

The cross claim alleges the fiction that this wholly controlled subsidiary promised to hold Jones harmless for damages in this case, inviting this proceeding to enter Mr. Jones’s conspiracist world where found facts and sworn testimony mean nothing at all. To ensure that Jones does not benefit from this latest ploy, the cross claim should be stricken immediately as untimely and made in bad faith. It must also be stricken immediately because it is pure fiction. It takes two parties to make a contract, and here there is only one: Jones completely controls FSS.

However, Free Speech Systems filed emergency paperwork on Friday in the bankruptcy proceeding to allow the current Texas trial to continue unabated.

The Debtor believes that it is in the best interests of its estate and creditors for the Heslin/Lewis Suit to continue to judgement notwithstanding the commencement of this Chapter 11 Case. Substantial resources of the Debtor and Plaintiffs Heslin and Lewis have already been expended in the Heslin/Lewis Suit to empanel a jury and present evidence to that jury. Based on representations made by counsel for Heslin and Lewis in the chapter 11 case of related party InfoW, LLC previously before this Court, the Debtor believes that Heslin and Lewis desire a final judgment from the Texas State Court and would seek relief from the automatic stay absent this request by the Debtor.

Many of the bankruptcy documents are embedded below: