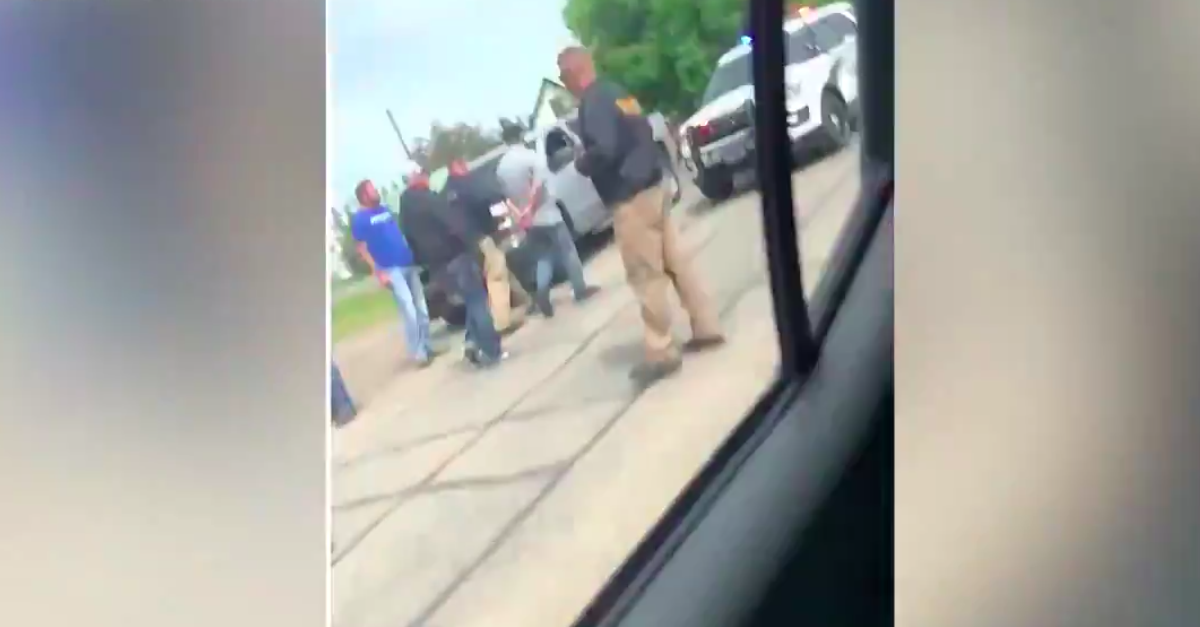 According to East Idaho News, Daybell’s silver SUV was pulled over by several officers approximately one mile south of his home at around 11:30 a.m. where they placed him in handcuffs and put him into the back of a police vehicle. Authorities had arrived on scene at around 7 a.m. to search the premises. It’s not yet clear what law enforcement was searching for, but it was reported that this was connected to the Sept. 2019 disappearance of Lori Daybell’s two children, Joshua “J.J.” Vallow, 7, and Tylee Ryan, 17.

A brief video of Daybell being taken into custody was captured by Brittany Chapple as she and another passenger drove past the scene of the arrest.

Brittany Chapple was driving when she saw Chad Daybell get arrested. Here's some of the video she sent me. pic.twitter.com/pZHSvhqr9I

A photograph of the arrest taking place was posted to Twitter by ABC4 Utah reporter Rosie Nguyen.

#BREAKING: @EastIDNews reporting Chad Daybell has been taken into custody by law enforcement. Witnesses told them they saw police pull Daybell in his SUV, place him in handcuffs, and put him in a police car about a mile south from his home. @abc4utah pic.twitter.com/lfU0sJHSlr

Early reports that have yet to be confirmed by police suggest possible human remains were found on the property.

Human remains were found on Daybell’s property during the search, according to Fox 10, but police have not confirmed the findings.https://t.co/8PxnM2eKx4

#WhereAreTheKids? Annie Cushing, who is Tylee Ryan's aunt posted on Facebook that she was contacted by a victim's advocate as human remains were found on Chad Daybell's property. @abc4utah pic.twitter.com/j0mzT5oCR5

BREAKING: Two different sources tell me human remains have been found on Chad Daybell’s property in Salem, Idaho. We are waiting to learn more from authorities. #fox10phoenix

Local news reporters noted that trucks were carrying backhoes onto the property; several canine units were also in the yard. Based on the photos, authorities appeared to have dug several holes on the property.

I just witnessed a backhoe arrive at the home of Chad Daybell where they are searching. He was taken into custody at around noon a mile from his home. #WhereAreTheKids? pic.twitter.com/s3jN0NtMgr

Tuesday marked the second time Daybell’s home has been searched by authorities this year.

Lori Daybell remains locked up in Idaho as she awaits trial in the child desertion case.

The children’s mother, at the time going by the name Lori Vallow, moved with the kids to Idaho in Sept. 2019 less than two months after the homicide of Vallow’s then-husband Charles Vallow.

Although the children went missing shortly after the move, Lori married new husband Chad Daybell in Nov. 2019 and traveled to Hawaii with him.

The so-called “doomsday cult” couple got married about two weeks after Chad Daybell’s previous wife Tammy Daybell died. They both remain under investigation for possible “conspiracy, attempted murder and murder.”