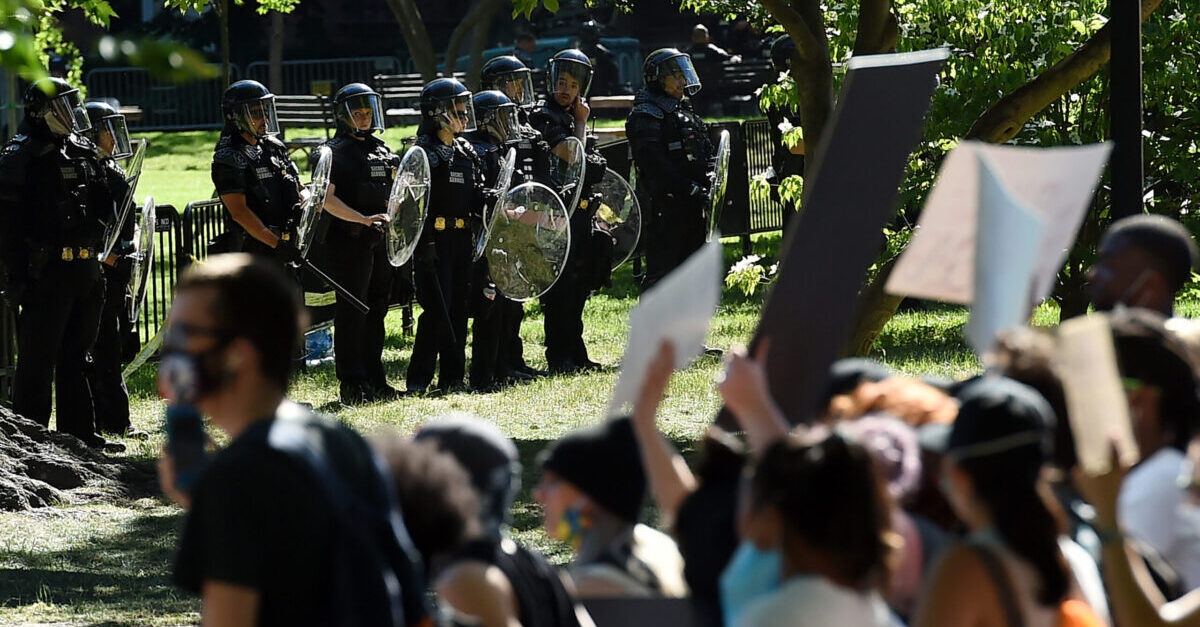 Weeks after an inspector general’s report splashed cold water on the narrative that Lafayette Square was cleared for a photo opportunity with a Bible, a federal judge found former President Donald Trump and ex-Attorney General Bill Barr cannot be sued over the incident.

“First, national security—specifically, the country’s national-security interest in the safety and security of the President and the area surrounding the White House—strongly weighs against creating a Bivens remedy here,” U.S. District Judge Dabney Friedrich wrote in a 51-page opinion on Monday.

In the 1971 case of Bivens v. Six Unknown Named Agents, the Supreme Court found an implied cause of action for federal government officials who violate constitutional rights.

Black Lives Matter protesters Randiya Buchanan and others had hoped their lawsuit last year would be among the cases that met that standard. She and her fellow demonstrators sued on June 11, 2020, some 10 days after what they described as a “day that will live in infamy.”

That was the day that police controversially deployed tear gas, pepper spray, and rubber bullets to remove protesters in the aftermath of George Floyd’s death. Once the crowd was dispersed, Trump made his way through the square and posed with a Bible in his right hand in front of the St. John’s Episcopal Church, which had been damaged by a fire that was intentionally set the night earlier.

More than a year would pass until the Interior Department’s inspector general found that the clearing of the square had been scheduled in advance—without an order from the then-president or attorney general.

As the lawsuit had not yet reached the merits, the issue before Judge Friedrich was more technical. She decided national-security concerns mandated the case’s dismissal—at least, as to the federal government representatives.

“In this context, it matters not whether the national security risk actually justified the particular action taken,” the ruling states. “Rather, the question is whether ‘national-security concerns’ were present in the decision-making process the federal officials faced and thus ‘whether the Judiciary should alter the framework established by the political branches for addressing [similar] cases.’ […] When it comes to managing crowd activity directly outside of the White House, decision-makers must weigh public, presidential, and White House security interests.”

Judge Friedrich, a Trump appointee, did, however, find the claims against Washington, D.C. and Arlington, Va. plausible enough to survive.

“As alleged, the defendants prohibited all expressive activities in Lafayette Square without any basis at all; they left open no alternative channels; and they forcibly dispersed protestors because of the plaintiffs’ exercise of their protected First Amendment rights,” the ruling states. “Reasonable officers would have known that such alleged actions violated clearly established law.”

Scott Michelman, the legal director of the ACLU of the District of Columbia, denounced the ruling as essentially giving the “federal government a green light to use violence, including lethal force against demonstrators, as long as federal officials claim to be protecting national security.

“Under today’s decision, Lafayette Square is now a Constitution-free zone when it comes to the actions of federal officials,” Michelman wrote in a statement. “Not only is this decision a stunning rejection of our constitutional values and protestors’ First Amendment rights, but it effectively places federal officials above the law.”

“We plan to evaluate all our legal options to ensure that protestors cannot be wantonly attacked at the whim of a federal official,” Michelman added, also urging congressional action to limit federal immunity.

For Buchanan’s lawyer Randy Mastro, from the firm Gibson Dunn, the ruling marked at least a partial victory for his client.

“We are gratified that the Court has recognized so much of this case can now proceed and that it should ‘have been clear to every reasonable officer at the time it occurred’ that the violent clearing of Lafayette Park without any basis would have been unconstitutional,” Mastro wrote in a statement. “But we will continue to seek justice against those federal officials who succeeded in getting certain claims dismissed against them, and intend to appeal those rulings, because we aim to see to it that something this horrific never happens again in our country.”