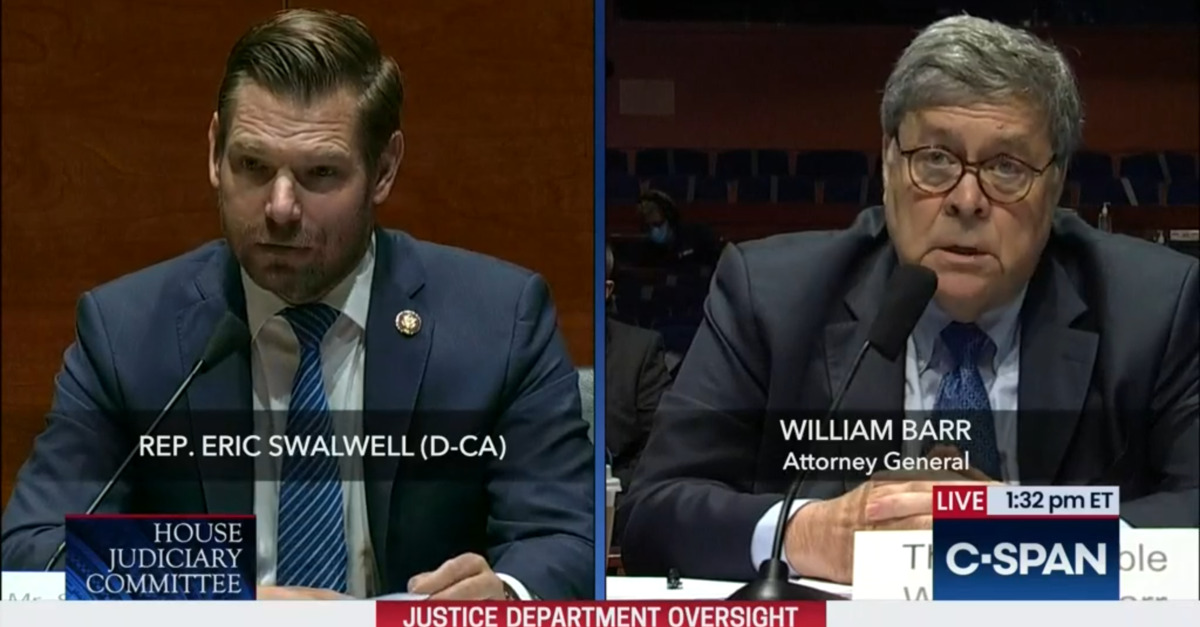 Rep. Eric Swalwell (D-Calif.) turned in a generally capable performance by grilling the 77th and 85th attorney general about his unprecedented intervention in the Roger Stone case — as well as suggestions that Stone was pardoned due to an unspoken agreement between Stone and Trump.

“Are you familiar with the December 3rd, 2018 tweet where Donald Trump said Roger Stone had shown ‘guts’ by not testifying against him?” Swalwell asked.

Barr said he was not.

“You don’t read the president’s tweets?” a bemused Swalwell asked.

To which Barr curtly replied: “No.”

“Well, there’s a lot of evidence in the president’s tweets, Mr. Attorney General,” Swalwell said, still a bit astounded. “I think you should start reading them.”

After switching gears to discuss the controversy over harsh home confinement conditions placed on former Trump friend and attorney Michael Cohen, Swalwell concluded his questioning by reminding Barr of one time the attorney general publicly acknowledged he was aware of the content of Trump’s tweets.

The California Democrat was followed by Rep. Tom McClintock (R-Calif.) who, in service of defending the attorney general’s backfield, actually worked toward an assist and an own-goal.

“My colleague from Georgia, Mr. Johnson, implied that in challenging the sentencing recommendation of Roger Stone, you were doing the bidding of the president. He didn’t want to hear your response. I would.”

To which Barr replied:

Well, no, I was–Roger Stone, I never discussed our sentencing recommendation with anyone outside the Department of Justice. That was a very condensed period of time. I made the decision that we should not take a position as to the precise sentence but should leave it up to the judge, and we should not affirmatively advocate for seven to nine years, and I made that on Monday, the 10th, and that night we filed–the department filed–and it didn’t reflect what I had cited, so that night I told people we had to fix it first thing in the morning. So we did as soon as I got in. We went forward with a plan to file. At that point I learned about the president’s tweet because I don’t monitor the president’s tweets, and I hesitated because I knew that I would be attacked for doing it. People would make the–argue that I did it because of the tweet. But I felt, at the end of the day, I really had to go forward with our filing because it was the right thing to do, and I am glad the judge agreed with it.

Several legal experts were not buying Barr’s half-alleged lack of awareness regarding what the president was tweeting.

Swalwell’s performance in particular–in marked contrast to most Democrats on the committee–was praised.

“[Rep. Swalwell] with excellent job questioning Barr, who would lead us to believe he doesn’t read Trump tweets,” noted former federal prosecutor and Democratic Party lead impeachment attorney Daniel S. Goldman. “Great follow up to suggest he should do so to gather evidence before declining to investigate.”