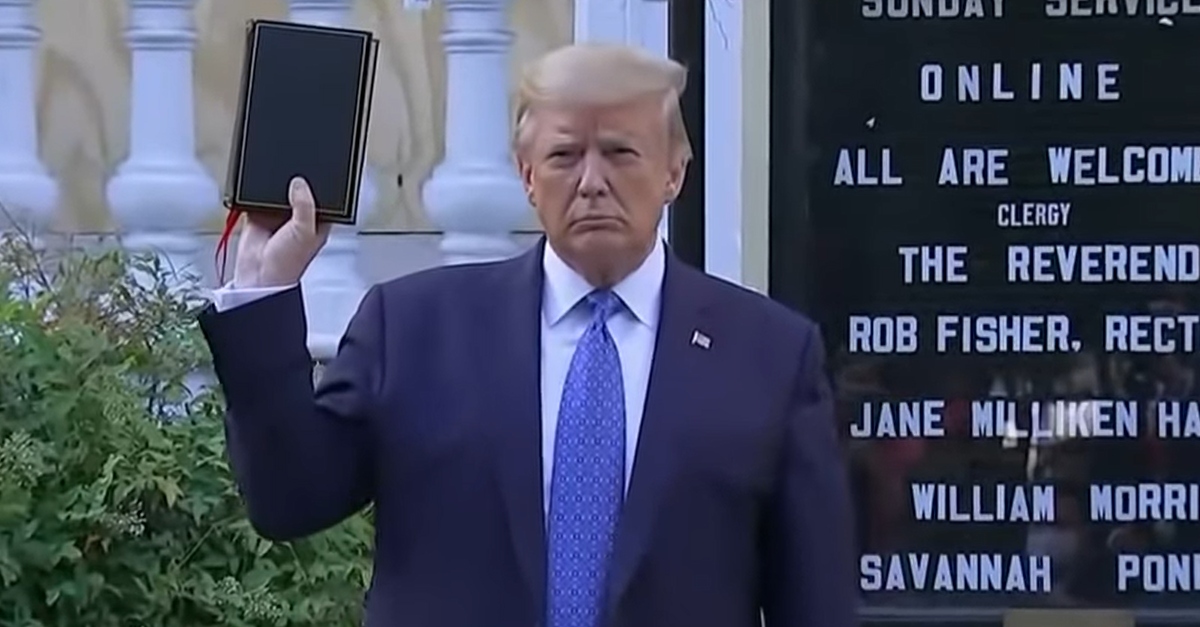 An attorney for Washington D.C.’s local cops admitted on Friday that officers did use tear gas on protesters around Lafayette Square last June. Critics at the time said the area was cleared so that then-President Donald Trump could have a self-serving photo op at St. John’s Episcopal Church. This included Rev. Mariann Edgar Budde, the bishop of the Episcopal Diocese of Washington, who said POTUS used the church as a “prop.”

Lawyer Richard Sobiecki, who represents D.C.’s Metropolitan Police Department, made no mention of the former head of state in a court hearing on Friday over a lawsuit from the American Civil Liberties Union and protesters.

“The curfew, violence of past nights, chaos created by federal defendants, discharge of tear gas in that direction was not unreasonable,” he said, according to WUSA. Reporting at the time showed that protesters in the area were peaceful.

This was 25mins before the curfew. There was no obvious warning to protesters to leave. I didn’t see a single thing thrown at police, compared to Sunday when there was a lot (and they stood their ground until fires were set around 10pm). And still they fired volley after volley.

“They suggested at various points they were encouraging people to move south on 17th street,” he reportedly said. “And that was encouraging via tear gas. That day was scarring in multiple ways, just in terms of the unexpected nature of the attack, the brutality of it, and the betrayal that many of them felt.”

Sobiecki’s admission is quite the turn. U.S. Park Police previously denied using tear gas, and some conservative pundits joined in downplaying the police response to the protests.

This shouldn’t get overlooked. There were a zillion fauxtrage articles and tweets from Trump allies, claiming tear gas wasn’t used and attacking journalists who said it was. https://t.co/xzPGECHTZa

Those at the scene, including journalists, said tear gas was in fact used on peaceful protesters before the 7 p.m. ET curfew.

This is what our crews picked up on 17th near H minutes after federal law enforcement cleared streets Monday night: Natural OC and artificial CS tear gas canisters. Released green choking gas that attacked our lungs and eyes. Item on right is flash bang. More at @wusa9.com pic.twitter.com/MVE80Zdj1g

Some online remarked bitterly on the admission.

Reminder that @kayleighmcenany stated in the aftermath there were no regrets after they used what was now confirmed as TEAR GAS so Trump could walk across the street and do a photo op with a Bible. https://t.co/WyIEc963YB

So it was tear gas after all? pic.twitter.com/9UH2p1p2HB