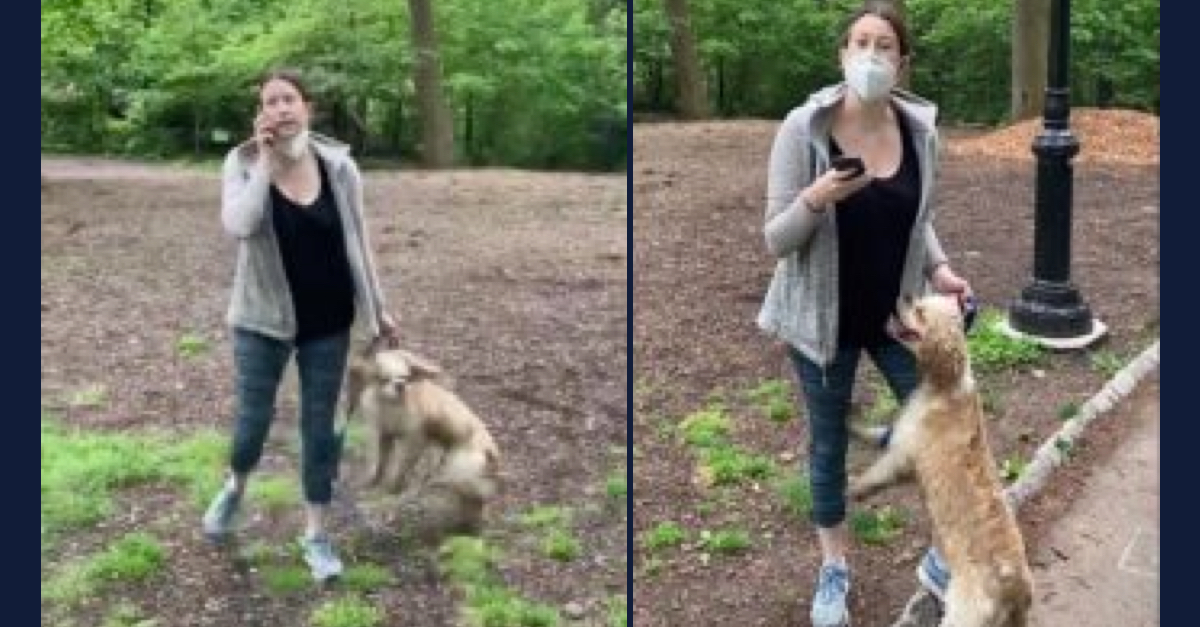 The white New York woman who called police after a Black bird-watcher in Central Park asked her to put her dog on a leash in accordance with park rules has lost her discrimination lawsuit against her former employer.

Amy Cooper became known as the “Central Park Karen” after calling police during a verbal confrontation with Christian Cooper. Christian Cooper had reminded the woman that her dog needed to be leashed in the area of the park where he encountered her. As the exchange grew heated, and Amy Cooper called 911, Christian Cooper began recording.

“I’m in the Ramble, there is a man, African-American, he has a bicycle helmet and he is recording me and threatening me and my dog,” Amy Cooper is heard saying on the call.

“I am being threatened by a man in the Ramble, please send the cops immediately,” she later added.

Amy Cooper’s employer, Franklin Templeton, fired her the next day.

“Following our internal review of the incident in Central Park yesterday, we have made the decision to terminate the employee involved, effective immediately,” the financial services firm said on Twitter on May 26, 2020. “We do not tolerate racism of any kind at Franklin Templeton.”

Racism is exactly what Amy Cooper alleged had occurred in her firing. She sued the company, as well as its CEO Jenny Johnson, in May of 2021 for discrimination on the basis of race and sex, defamation, intentional infliction of emotional distress, and negligence.

According to Amy Cooper, the company targeted her for firing because of her race and gender, and defamed her with its announcement that she had been fired.

In a ruling Wednesday granting Franklin Templeton’s motion to dismiss the case, Abrams found that Franklin Templeton public statements about the situation didn’t support Amy Cooper’s assertion that she was targeted because she is white.

“None of Franklin Templeton’s public statements made any mention of Plaintiff’s race,” said the judge, a Barack Obama appointee. (The judge is also the sister of Law&Crime founder Dan Abrams.)

“Defendants’ repeated condemnations of racism, moreover, did not ‘implicate [Plaintiff’s] race’ because — as the Second Circuit has squarely held — “‘[r]acism’ is not a race, and discrimination on the basis of alleged racism is not the same as discrimination on the basis of race,'” the judge continued (citations omitted). “‘[A] statement that someone is a ‘racist,’ while potentially indicating unfair dislike, does not indicate that the object of the statement is being rejected because of his race.’ Plaintiff’s complaint thus fails to allege that Defendants made any remarks, whether publicly or privately, that could be viewed as directly reflecting discriminatory animus.”

Abrams similarly rejected Amy Cooper’s claim that she was fired because of her gender. In support of this claim, Amy Cooper cited three examples of male employees of Franklin Templeton who had not been fired after wrongdoing, but Abrams found that the situations were not similar enough for comparison.

“The misconduct that Plaintiff’s proposed comparators allegedly engaged in — which runs the gamut from plagiarism to insider trading to a felony conviction — is simply too different in kind to be comparable to her conduct in this case,” Abrams said. “The complaint does not allege, for instance, that any reports of the comparators’ conduct became — or even came close to becoming — ‘international news as a racial flashpoint,’ as Plaintiff herself described the Central Park incident.”

Abrams also rejected Amy Cooper’s defamation claim. The plaintiff had pointed specifically to Franklin Templeton’s May 26 Twitter announcement that the company had conducted an “internal review of the incident in Central Park” before terminating her and that they “do not tolerate racism of any kind.” Amy Cooper also said a statement from Johnson in June of 2020, in which she said she ‘[thought] the facts were undisputed in this case,” and a July statement that the Franklin Templeton defendants “espouse zero tolerance for racism” are defamatory because they essentially assert that Amy Cooper is a racist.

Abrams found that all three statements were expressions of opinion that are not subject to defamation claims: “It is well-established that an accusation of bigotry is a protected statement of opinion, rather than a defamatory statement of fact capable of being proven true or false.”

“We are pleased that the court has dismissed the lawsuit,” a spokesperson for Franklin Templeton told Law&Crime in an emailed statement. “We continue to believe the company responded appropriately.”

Attorneys for Amy Cooper did not immediately reply to Law&Crime’s request for comment.

Read the judge’s opinion, below.