Alan Dershowitz Massages the Facts: ‘I Got’ Epstein Files Unsealed 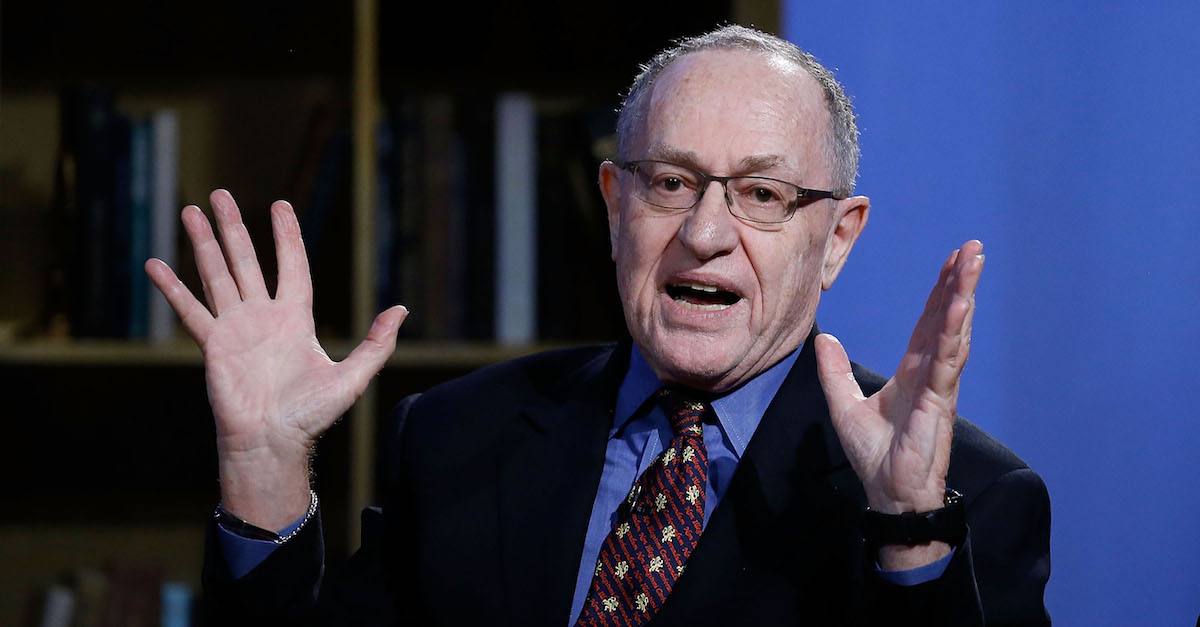 The famous legal celebrity repeatedly claimed that he was the impetus behind the massive Thursday night document dump.

In one such post, Dershowitz said he “demanded release of all [the] documents” in order to cast doubt on claims made by Epstein survivor Virginia Roberts Giuffre. Specifically, Dershowitz claims there are “emails and manuscripts” which prove “in [Giuffre’s] own words that she never met me.”

A Law&Crime review of all 638 pages in the first tranche of unsealed files shows that none of the documents contain any such admission from Giuffre along the lines suggested by Dershowitz.

Dershowitz’s attorney, Imran Ansari, told Law&Crime during a phone call that his client was likely referring to previously unsealed materials as well.

The newly unsealed court files contain several references to Giuffre’s claims that she was sex trafficked to Dershowitz by Epstein.

“Plaintiff, on behalf of her joint defense partners, provided evidence to support the factual claim neither [Bradley] Edwards or [Paul] Cassell (nor anyone else) asked Plaintiff to lie about her stories of alleged sexual abuse and trafficking,” a filing by Ghislaine Maxwell‘s attorney Laura Menninger reads on page 28–referring to Giuffre’s attorneys.

“Edwards and Cassell clearly had a powerful basis for believing their client’s allegation that she had been sexually abused by Dershowitz, particularly where she had made this allegation to them as far back as 2011,” that same filing reads on page 30.

“In the Joinder Motion Edwards and Cassell boldly state ‘Epstein required Jane Doe #3 to have sexual relations with Dershowitz on numerous occasions while she was a minor, not only in Florida but also on private planes, in New York, New Mexico, and the U.S. Virgin Islands,’” the filing notes yet again on page 34.

One such powerful individual that Epstein forced then-minor Jane Doe #3 to have sexual relations with was [REDACTED], a close friend of Epstein’s [REDACTED]. Epstein required Jane Doe #3 to have sexual relations with [REDACTED] on numerous occasions while she was a minor, not only in Florida but also on private planes, in New York, New Mexico, and the U.S. Virgin Islands. In addition to being a participant in the abuse of Jane Doe #3 and other minors, [REDACTED] was an eye-witness to the sexual abuse of many other minors by Epstein and several of Epstein’s co-conspirators. [REDACTED] would later play a significant role in negotiating the [Non-Prosecution Agreement] on Epstein’s behalf. Indeed, [REDACTED] helped negotiate an agreement that provided immunity from federal prosecution in the Southern District of Florida not only to Epstein, but also to “any potential co-conspirators of Epstein.”  Thus, [REDACTED] helped negotiate an agreement with a provision that provided protection for himself against criminal prosecution in Florida for sexually abusing Jane Doe #3. Because this broad immunity would have been controversial if disclosed, [REDACTED] (along with other members of Epstein’s defense team) and the Government tried to keep the immunity provision secret from all of Epstein’s victims and the general public, even though such secrecy violated the Crime Victims’ Rights Act.

The redactions are believed to refer to Dershowitz because the language is almost identical to a Florida court document previously leaked to–and reported by–Politico’s Josh Gerstein in 2014. The 2014 document was later stricken but not before Gerstein identified Dershowitz as the person accused.

Law&Crime asked Dershowitz to clarify what he meant about the documents referred to in his original tweet about the Epstein files.

Dershowitz went on to describe an alleged email chain between Giuffre and British journalist Sharon Churcher in which the journalist allegedly plies the Epstein survivor to gin up claims against Epstein’s former lawyer. Some of those emails appear to have been released in August 2019.

“It seems clear that Guiffre [sic] had never even heard of me at this point,” Dershowitz said. “Ten years after she now claims she had sex with me.”

“Now for the smoking gun: Guiffre [sic] then does put me in her book but as someone she did NOT have sex with,” Dershowitz continued.

Not specifically being identified as a sexual partner, however, is different from never having met. The manuscript does, in fact, describe an encounter in which Dershowitz and Giuffre were in the same room together–as well as saying that she had seen him on Epstein’s island.

Dershowitz’s lawyer provided the following statement to Law&Crime regarding his tweets:

In response to another email, he said: “I am pushing for the release of everything. Including any videos, photos etc. I have nothing to hide.”

“There are no new accusations against me in the documents I got unsealed,” he wrote.

The years-long effort to have the full Epstein files controlled by the Southern District of New York and the Second Circuit Court of Appeals has been led by Giuffre and her attorneys. The Miami Herald and their star journalist Julie K. Brown have also been instrumental in the legal battle over those documents.

Dershowitz’s interest in the case–at least in legal terms–began in August 2o16 when he filed a motion to intervene and unseal “certain documents” in the defamation case between Maxwell and Giuffre. Brown filed a motion to unseal “all prior papers and proceedings” in April 2018.

There have also been allegations that Dershowitz himself has attempted to fight and stall the release of the Epstein files.