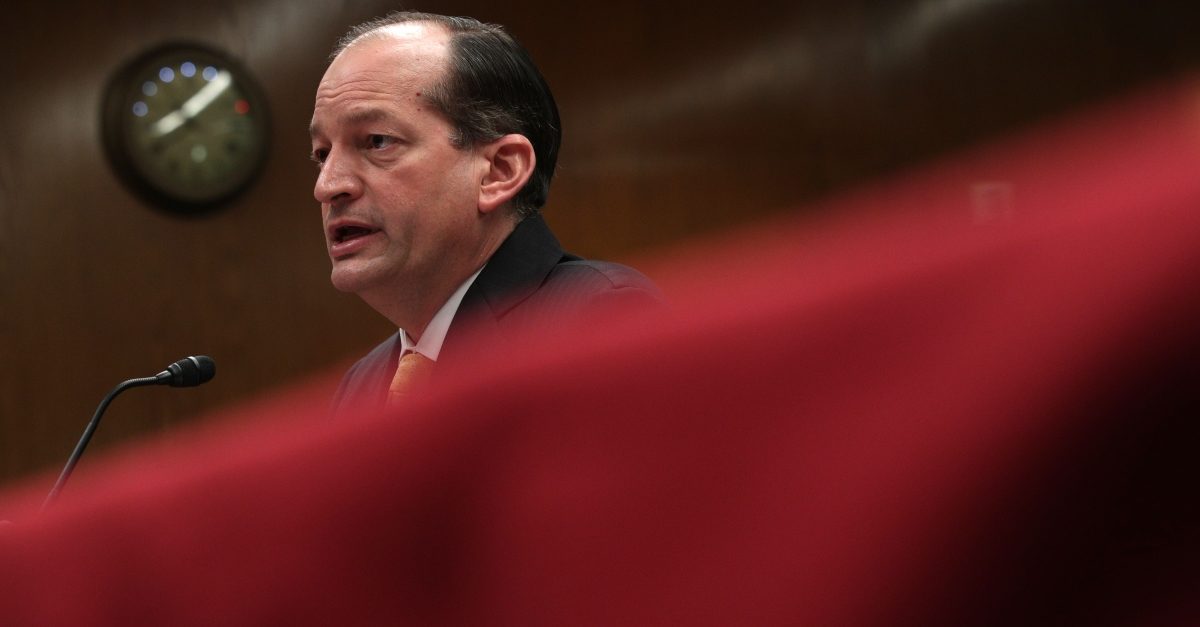 Two former Florida legal officials pushed back on Wednesday against U.S. Labor Secretary Alex Acosta’s statements in Wednesday’s press conference about his brokering of Jeffrey Epstein’s lenient plea deal in 2008. The backlash over Acosta’s involvement in the deal has steadily intensified since federal authorities in New York arrested Epstein over the weekend. Epstein has been charged with sex trafficking and conspiracy to commit sex trafficking.

Former Miami-Dade Judge Jeffrey Swartz released a statement Wednesday saying that despite laying blame at the feet of state authorities, the decisions in Epstein’s case were made by Acosta.

“The original Epstein plea agreement raised eyebrows and was quietly the topic of conversation in South Florida Criminal Law circles (both state and federal prosecutors and defense attorneys) when it occurred.  Many questions were asked and few answers were given,” Swartz said in a statement emailed to Law&Crime.

“Mostly this was a hands on, top-down, decision by Acosta who was known as a Republican operative before his appointment as US Attorney.  His involvement, at minimum, could be described as ‘unusual.’”

Swartz also called for Acosta to be removed from his cabinet post and possibly disbarred, saying, “If his actions are as the SDNY (and the Miami Herald) has alleged, then it is abhorrent.”

“The Department of Justice should abandon Mr. Acosta, as should the President.  He should face the consequences of his acts before the public and ultimately, if warranted, the Florida Bar.”

Acosta “should not be allowed to rewrite history,” Krischer said in a statement after the press conference.

During Wednesday’s press conference, Acosta placed a great deal of the blame on state authorities, saying that federal prosecutors from his office actually prevented state prosecutors from allowing Epstein to walk away without serving any jail time at all.

“We’ve seen other cases where state prosecutors let folks go with no sentence and people shake their heads. In this case, the federal office intervened before the plea was taken and said ‘stop,’ adding “the Palm Beach State Attorney’s Office was willing to let Epstein walk free. No jail time. Nothing,” Acosta said. “Prosecutors in my former office found this to be completely unacceptable, and we became involved.”

Krischer, however, said this was not the case at all.

“If Mr. Acosta was truly concerned with the State’s case and felt he had to rescue the matter, he would have moved forward with the 53-page indictment that his own office drafted. Instead  Mr. Acosta brokered a secret plea deal,” Krischer said.

“The purpose in this case was to bring Epstein to jail, to put him behind bars. And so, there were other individuals that may have been involved, in any type of conspiracy there are individuals around someone, the focus really is on the top player. And that’s where our focus appropriately was.”

While CNN reported Wednesday that Acosta’s position in the Trump administration “hangs by a thread,” Acosta described his relationship with President Donald Trump as “outstanding,” saying he had just spoke to the President who had assured him that “any articles to the contrary” were “BS.”