Who Is Neera Tanden, Biden's Office of Management and Budget Pick? | Law & Crime

‘A Sacrifice to the Confirmation Gods’: Biden’s Pick to Head OMB Has a Tough Road to Confirmation 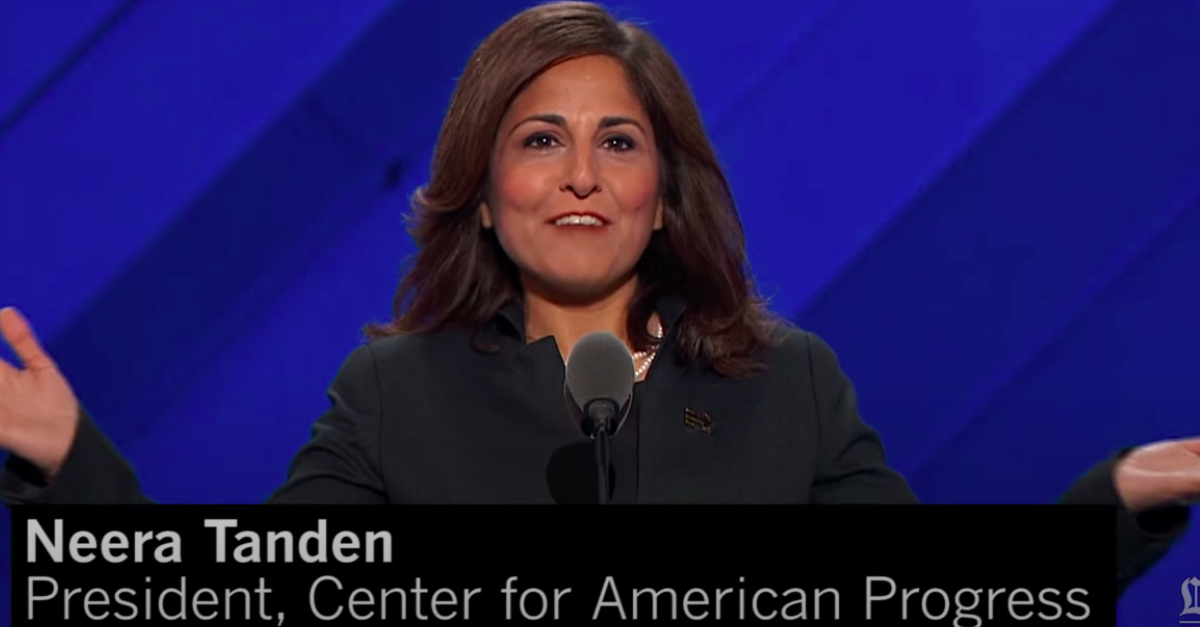 President-elect Joe Biden is expected to pick Neera Tanden as his administration’s nominee to lead the Office of Management and Budget (OMB), the Wall Street Journal reported Sunday. An attorney who currently serves as president and CEO of the liberal think tank Center for American Progress (CAP), Tanden’s history of divisive statements and unabashed partisanship instantly made her the incoming administration’s most controversial potential nominee, drawing criticism from Republicans as well as progressive Democrats.

Tanden, a veteran of Hillary Clinton’s 2008 presidential campaign who later became one of the architects of Obamacare, had been an outspoken opponent of Republicans’ recent campaign to appoint Justice Amy Coney Barrett to the Supreme Court, calling the process “illegitimate.” She also accused Senate Majority Leader Mitch McConnell (R-Ky.) of having “broken the supreme Court, and in conjunction with President Donald Trump, he has broken our democracy.”

A spokesperson for recently re-elected Sen. John Cornyn (R-Texas) said on Sunday evening that Tanden’s comments meant she had “zero chance” of being confirmed by a GOP-led Senate. Republicans will maintain control of the Senate if either GOP incumbent Kelly Loeffler or David Perdue win their run-off elections against Democratic challengers Rev. Raphael Warnock and Jon Ossoff in January.

“Neera Tanden, who has an endless stream of disparaging comments about the Republican Senators’ whose votes she’ll need, stands zero chance of being confirmed,” wrote Cornyn’s communications director Drew Brandewie.

Neera Tanden, who has an endless stream of disparaging comments about the Republican Senators’ whose votes she’ll need, stands zero chance of being confirmed. https://t.co/f6Ewi6OMQR

Similarly, Josh Holmes, a former chief of staff to Senate Majority Leader McConnell, referred to the nomination as “a sacrifice to the confirmation gods.”

And there’s the sacrifice to the confirmation gods…. https://t.co/esK3W1ektM

Tanden also hasn’t been shy about scrapping with the more progressive wing of the Democratic party, particularly Vermont’s Sen. Bernie Sanders, who last year wrote a letter to CAP, accusing Tanden of “maligning my staff and supporters and belittling progressive ideas.”

Critiques of Tanden also fall outside of the traditional left-right dichotomy. For example, several employees spoke out against Tanden’s bungled response to allegations of sexual harassment and retaliation allegations against CAP in 2018. According to a BuzzFeed News report, Tanden called a meeting with staffers where she twice named the anonymous victim, leaving employees aghast. She later said it was an unintentional error and “profusely apologized.”

Additionally, as a staffer for Hillary Clinton in 2008, Tanden was accused of punching CAP’s chief editor in the chest after asking Clinton a question about her support for the Iraq war.

When asked about the incident last year, a “still angry Ms. Tanden” told the New York Times, “I didn’t slug him, I pushed him.”