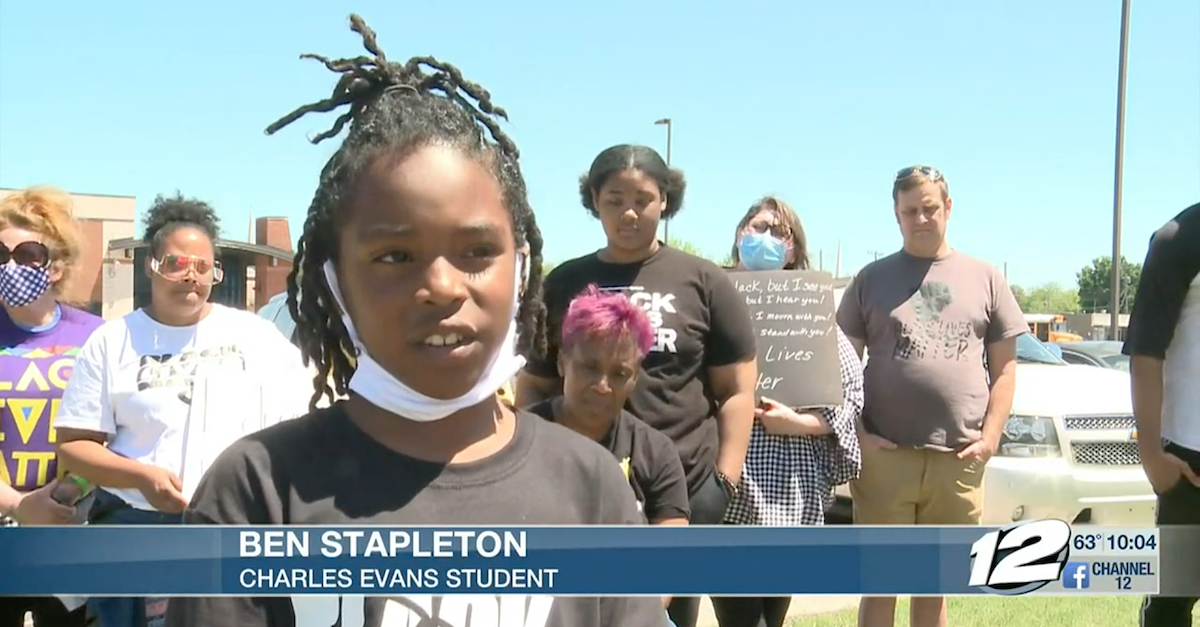 Ben Stapleton, also identified by the New York Times as Ben Herbert, discusses what happened when he wore a BLM shirt to school in Oklahoma.

Two Oklahoma elementary school students were pulled out of their classrooms last week and forced to spend the remainder of the day in an administrative office after they came to school wearing “Black Lives Matter” T-shirts, the New York Times reported on Sunday.

Bentlee Herbert, 8, and Rodney Herbert, 5, who are brothers, were removed from separate classes in the Ardmore school district because the superintendent said that political attire would “not be allowed at school,” the children’s mother, Jordan Herbert, told the Times.  Ardmore, Okla., is midway between Oklahoma City and Dallas, Tex.

The first incident involving the shirts occurred on April 30, when Bentlee wore his “Black Lives Matter” shirt to his third grade class at Charles Evans Elementary where the principal, Denise Brunk, made him turn the shirt inside out, telling him he was not allowed to wear it again. When Jordan Herbert went to the school to find out how her son’s shirt violated the district’s dress code, Brunk referred her to Ardmore City Schools superintendent Kim Holland.

“He told me when the George Floyd case blew up that politics will not be allowed at school,”  Herbert said in an interview the Times on Friday. “I told him, once again, a ‘Black Lives Matter’ T-shirt is not politics.”

Herbert told The Daily Ardmoreite that during a 40 minute conversation with Holland, he was unable to identify where the dress code policy banned her kids’ shirts and he told her such a provision was not there.

“Later that morning, Ms. Herbert received a call from Rodney’s school, Will Rogers Elementary, telling her that she needed to either bring Rodney a different shirt or let the school provide one for him, or Rodney would be forced to sit in the front office for the rest of the school day. Rodney did not change shirts, and he sat in the office until school was over,” the Times reported. “Ms. Herbert learned later that day that Bentlee had also been made to sit in his school’s front office, where he missed recess, and did not eat lunch in the cafeteria with his classmates.”

Holland said the ban on political apparel was neutral in nature, and would apply to both sides of the political spectrum.

“It’s our interpretation of not creating a disturbance in school. I don’t want my kids wearing MAGA hats or Trump shirts to school either because it just creates, in this emotionally charged environment, anxiety and issues that I don’t want our kids to deal with,” Holland told the Daily Ardmoreite.

Holland made a similar comment to nearby Sherman, Tex. television station KXII.

“I understand what she is saying,” Holland said with reference to the boys’ mother, “but school is not the place to have all that, you know, political back and forth and upheaval. We’re trying to teach kids things like reading and writing.”

The American Civil Liberties Union (ACLU) of Oklahoma on the other hand penned a letter to Holland, Brunk, and James Foreman Jr., the president of the Ardmore City School Board Education, stating that prohibiting “Black Lives Matter” shirts is a violation of students’ First Amendment rights.

The letter cited to the landmark 1969 Supreme Court case Tinker v. Des Moines Independent Community School District. In that case, a group of students showed their opposition to the Vietnam war by wearing black arm bands to school, which were subsequently banned by the school board. The students sued. In a 7-2 ruling, the Supreme Court held that public schools “may not be enclaves of totalitarianism,” and that students do not “shed their constitutional rights to freedom of speech or expression at the schoolhouse gate.”

“This has been the unmistakable holding of this Court for almost 50 years,” the ACLU wrote in its letter to school administrators.

The Oklahoma ACLU has not responded to a Law&Crime request for comment.