Mississippi Zoning Board That Warned ‘If You Let Them Build It, They Will Come’ Is Ordered to Allow Construction of Mosque 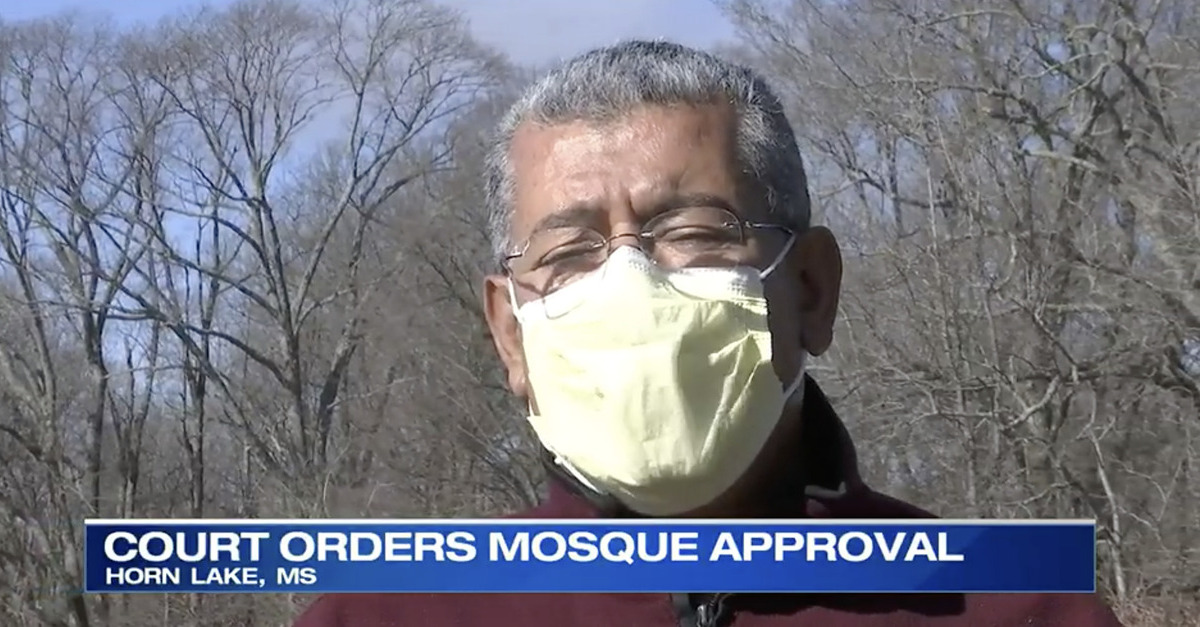 Maher Abuirshaid pictured wearing a mask while discussing the case with reporters.

In a big win for Muslim families, a federal court has ordered officials to allow the construction of a mosque in Horn Lake, Mississippi.

The complaint explained that the builders sought to construct what would become the only mosque in a city that has thirteen churches, and the only mosque in a county that has 132 churches. Muslim plaintiffs Riyadh Elkhayyat and Maher Abuirshaid must travel out of state to worship. Despite presenting a site plan that “met or exceeded” all requirements, Horn Lake’s Planning Commission denied approval. On appeal, the Board of Aldermen affirmed the denial, and according to plaintiffs, “claimed that the proposed mosque would create traffic and violate local noise ordinances,” despite having no supportive evidence.

The lawsuit alleged that the Board of Aldermen made clear that their denial was based on anti-Muslim sentiment. Per the complaint:

Despite the pretextual excuses for their decision, Board members did not work very hard to hide the true reason they denied approval for the project—anti-Muslim prejudice. As then Alderman John E. Jones Jr. told the local newspaper: “I don’t care what they say, their religion says they can lie or do anything to the Jews or gentiles because we’re not Muslims.” In making his motion to reject the mosque’s proposed site plan, Jones ominously warned his fellow Board members, “[I]f you let them build it, they will come. So I think we need to stop it before it gets here.”

Watch the video of the zoning meeting and the alleged comments here.

Shortly after the complaint was filed in the case, Judge Mills wrote that it presented “very serious, and if proven factually accurate, strong allegations of religious discrimination.”

The court’s most recent order declares the February 2021 denial of approval null and void, and orders the city to grant approval within 14 days. It continues, ordering the city to “consider, process and act upon—without any unusual delay and free from any illegal discriminatory intent or effect—all future construction, permitting, and other applications associated with the construction and operation of the Abraham House of God and development of the property in Horn Lake owned by MR Property, LLC.”

Moreover, the City of Horn Lake must pay $25,000 in appellate costs to the plaintiffs.

Plaintiff Riyadh Elkhayyat reacted to the court’s order as follows:

We are heartened and relieved that we are able to move ahead with our plans for a mosque in Horn Lake, which will provide a critical local house of worship for my family and other Muslims in the community to gather and practice our faith freely and without discrimination.

Abraham House of God co-founder plaintiff Maher Abuirshaid, said, “We look forward to having the opportunity to join the wonderful fabric of the Horn Lake religious community and are thankful to the court for facilitating this resolution that addresses everything we had hoped to achieve.”

ACLU of Mississippi Legal Director Joshua Tom issued a statement saying,“A wrong has been rectified with this order. People of every faith should have a safe place to worship, including the Muslim community of DeSoto County.”

Heather Weaver, senior staff attorney for the ACLU Program on Freedom of Religion and Belief, hailed the decree as “an important victory for religious freedom,” that “affirms the fundamental principle that the government may not base its decisions on bigotry against a particular faith.”

Jonathan Youngwood, Global Co-Chair of the Litigation Department at Simpson Thacher & Bartlett LLP who represents the plaintiffs, said in a statement to Law&Crime that he is “very pleased that the parties were able to come to a successful resolution, which upholds the constitutional right of the Muslims of DeSoto County and Northern Mississippi to practice their religion and join together in a local place of worship.”

“The consent order not only advances our client’s goal of building a mosque in Northern Mississippi, it also demonstrates that municipalities are not permitted to discriminate on the basis of religion. If they do, the Courts will act to protect “Constitutional and statutory rights,” Youngwood added. “The consent decree is a clear victory for religious freedom.”

Attorneys for Horn Lake did not immediately respond to Law&Crime’s request for comment.