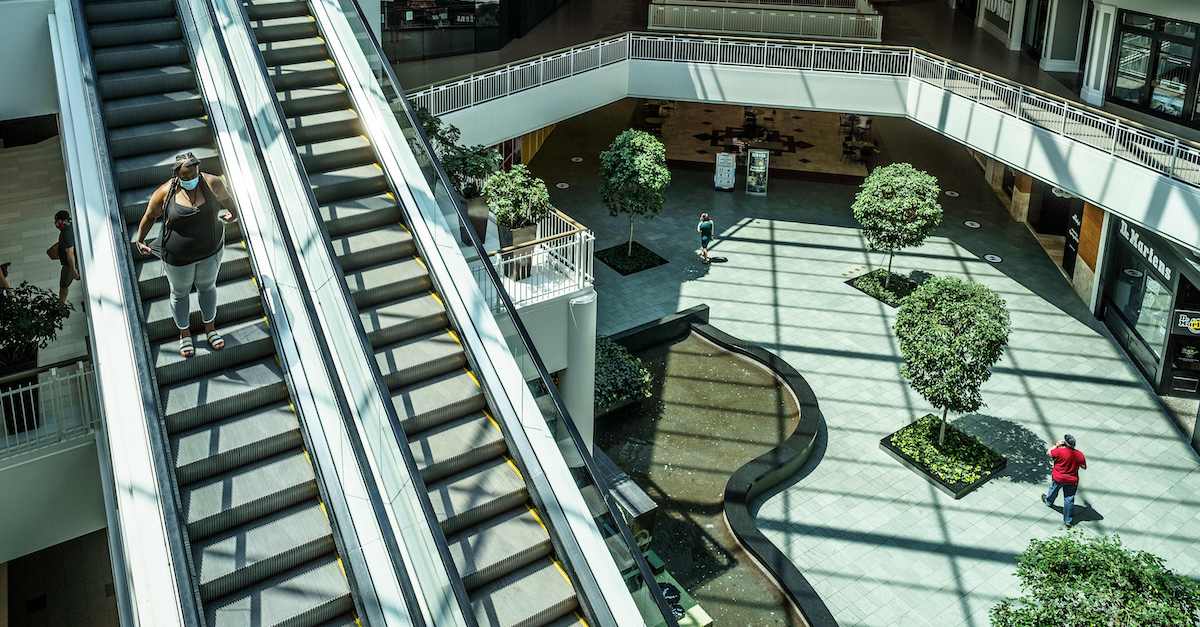 A woman wearing a facemask rides down the escalator at the Mall of America on June 16, 2020 in Bloomington, Minnesota.

A federal court struck down a Bloomington, Minnesota ordinance that forbade photographing children near a local park, ruling that the statute is a violation of the First Amendment.

The U.S. Court of Appeals for the Eighth Circuit sided with resident Sally Ness, who regularly photographed activities on city property to share her concerns about overuse of the neighborhood facility.

In 2011, the Al Farooq Youth and Family Center (“the Center”) opened next to the Dar Al-Farooq mosque. The Center was to be the largest Islamic Community Center in the United States, and operates a school, day care, and place of assembly. Both the mosque, which was bombed in 2017, and the Center have been the target of anti-Muslim sentiment in the neighborhood.

In 2019, a series of anti-Islamic videos were posted on YouTube, showing video taken outside the mosque, and arguing that the mosque violates city land-use laws. It is unknown whether Ness had any connection to the videos posted. However, Ness often voices concerns about the Center’s actions via her Facebook page titled, “Concerned Citizens of Bloomington.” During Ness’ 2013 bid for City Council, she posted that her objective was “to communicate issues to and educate residents about matters that are before the city council,” and create neighborhood associations that would “allow residents to voice concerns and communicate back to the council in a unified manner.”

By October 2019, the City Council had approved an ordinance specifically mandating that “[n]o person shall intentionally take a photograph or otherwise record a child without the consent of the child’s parent or guardian.” The violation of the ordinance is a misdemeanor.

The American Freedom Law Center filed a lawsuit on Ness’ behalf against the City of Bloomington, the Hennepin County Attorney, and the two police officers under 42 U.S.C. § 1983, alleging violations of her First and Fourteenth Amendment rights. They argued that Bloomington and the police officers unlawfully used the statute to “silence” Ness.

The American Freedom Law Center describes itself on its website as “first and foremost a public interest litigation firm,” that “aggressively seeks to advance and defend our Nation’s Judeo-Christian heritage in courts all across our Nation.” It also notes:

The strength of our Nation lies in its commitment to a Judeo-Christian heritage and moral foundation and to an enduring faith and trust in God and His Providence. AFLC seeks a return to America’s founding commitment to receive God’s continued blessing to preserve the soul of this great Nation.

Minnesota Attorney General Keith Ellison intervened in the lawsuit, arguing that Ness videotaped congregants at Dar Al-Farooq mosque without their consent, “causing those congregants and their children to feel intimidated and afraid.” Ellison asked the court to dismiss Ness’ lawsuit and uphold the Bloomington statute meant to protect children from harassment.

A unanimous three-judge panel of the U.S. Court of Appeals for the Eighth Circuit that included Circuit Judges Roger Leland Wollman (a Ronald Reagan appointee), Jonathan Kobes, and Steven Colloton (both Donald Trump appointees) sided with Ness and struck down the ordinance.

Judge Colloton penned the 13-page decision. The court ruled that that Ness’ photo and video recording “is analogous to news gathering,” and is therefore entitled to protection under the First Amendment protection, because “they are an important stage of the speech process that ends with the dissemination of information about a public controversy.”

The court ruled that Ness’ photography and videography constituted speech. “If the act of making a photograph or recording is to facilitate speech that will follow,” wrote the judge, “the act is a step in the ‘speech process,’ and thus qualifies itself as speech protected by the First Amendment.”

Moving on to analyze the ordinance under the standard framework for free-speech cases, Colloton found that the restriction was “content-based” and therefore subject to strict scrutiny. Under that highest standard of constitutional scrutiny, the ordinance could only survive if were narrowly tailored to a compelling government interest.

The panel found that the city did not sufficiently prove that the statute was narrowly tailored to its articulated interest in “protecting children from intimidation or exploitation.” The court found that Ness sought to take her photographs and video in an effort to capture matters of public interest, and had no intent to harass, intimidate, or exploit children. Ness argued that her practice was to obscure the identities of juveniles posted online, and the city failed to dispute that claim.

As a result, the court ruled that the ordinance “is significantly over inclusive with respect to the City’s asserted interest,” and therefore, “fails strict scrutiny as applied to Ness’s proposed conduct.”

The court also ruled that the district court had been correct in permitting the two police officers to be protected by qualified immunity.

Attorneys for the parties did not immediately respond to requests for comment.