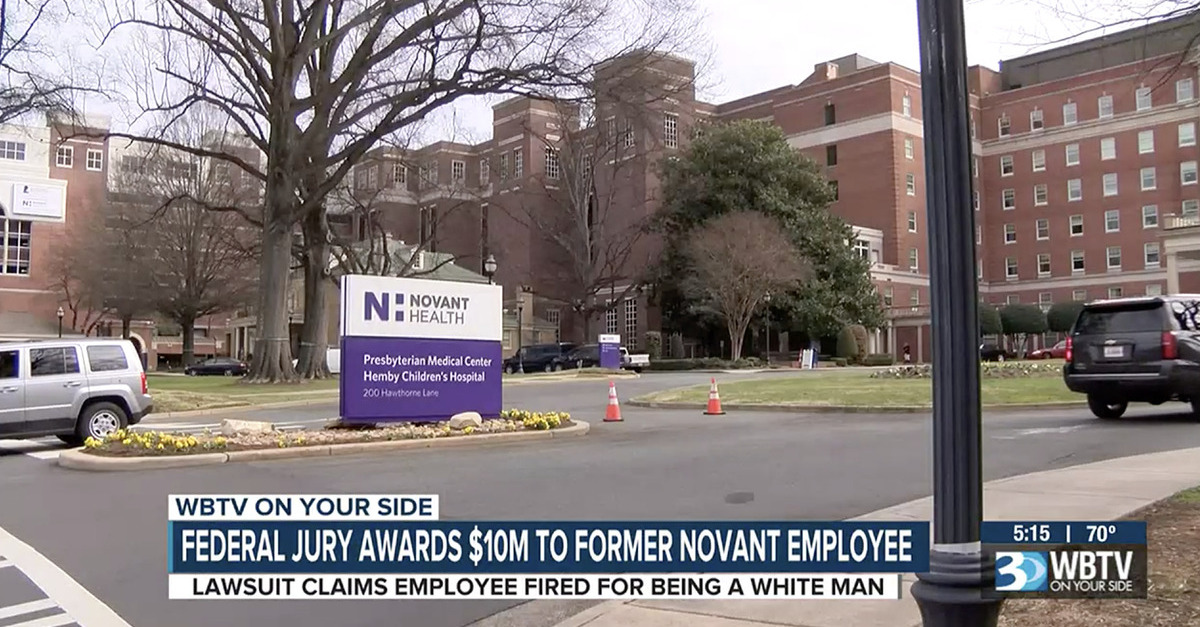 David Duvall, a white man and former marketing executive, was handed a $10 million verdict by a federal jury that found him to have been a victim of race and gender discrimination by his former employer. Duvall sued Novant Health after his employment was terminated in July 2018.

Duvall claimed that despite his stellar job performance, he was fired without warning “as part of an intentional campaign to promote diversity in [Novant’s] management ranks.” He claimed that a number of white male employees were also terminated suddenly while the company replaced a number of high-level executives with Black people and women. “While the goal of achieving diversity in leadership has recognized value,” Duvall asserted in his complaint, “terminating high performing employees with no justification or purpose other than to achieve diversity constitutes an adverse employment action based on race and/or gender.”

Novant Health is a non-profit organization that oversees 15 hospitals and hundreds of outpatient clinics and has over 35,000 employees. It is based in North Carolina, but Duvall lived in Michigan.

Duvall brought a lawsuit for discrimination based on Title VII of the Civil Rights Act and and ERISA lawsuit under 29 U.S.C. § 1102. He also alleged a state claim for wrongful discharge.

The jury’s verdict form indicated that the jury found that Duvall’s race had been a “motivating factor” in Novant Health’s decision to terminate him and that Novant would not have terminated Duvall had he been female or non-Caucasian. The jury awarded Duvall $10,000,000 in punitive damages.

We are pleased that the jury agreed with Mr. Duvall that his race and gender were unlawful factors in his termination – that he was fired solely to make room for more diverse leaders at Novant Health.  The jury learned that Duvall was not the only person terminated in this manner in a concerted effort in 2018 to remake the demographics of the leadership team. They saw the documents with that express goal and a timeline for the plan in 2018, and learned that his boss had 7 white male direct reports in Jan 2018 and then had 2 by Jan 2019.

Largess clarified that his client’s lawsuit “was decidedly not a statement against diversity and inclusion programs.” Rather, explained Largess, Duvall “was a strong advocate of diversity and inclusion at Novant” who sat on committees that supported diversity initiatives, hired and promoted minority staff members, and even spent personal time advancing the company’s commitment to diversity.

“That was the irony in his termination,” said Largess. He made it clear that the lawsuit had not challenged the existence of diversity initiatives.

“The lawsuit was only about the need to run such programs lawfully,” Largess said. “The jury foreperson was a black woman who helps run the D&I program where she works, and she stayed after to hug Mr. Duvall and express her sympathy.”

Under the law, a defendant has the right to have a jury verdict for punitive damages reviewed by an appellate court, and some speculate that the enormous verdict in Duvall’s favor will be reduced on appeal.

Counsel for Novant Health did not immediately respond to request for comment.

However, in court papers, Novant said Duvall was fired “due to his deficient performance, including his inability to communicate effectively before a group and the delegation of the critical duties of his position to his subordinates.” Novant also alleged that Duvall “regularly failed to attend meetings.” In sum, the organization argued that its termination of Duvall was “based on legitimate, non-discriminatory reasons unrelated to Plaintiff’s race, sex or any other alleged protected activity or characteristic.”

“Defendant at all times acted reasonably and in good faith toward Plaintiff,” Novant’s court papers claimed. “All decisions regarding Plaintiff were based on reasonable factors other than race, sex or any other alleged protected activity or characteristic, and it did not act intentionally or violate any law, regulation or public policy willfully or otherwise.”

The case survived motions to dismiss, and a jury did not buy those or similar arguments.

The case was number 3:19-cv-624 in U.S. District Court for the Western District of North Carolina (Charlotte Division).