‘Where’s My Bible?’: Mom Allegedly Performed Religious Ritual in Neighbor’s Yard Night Before She and Son Were Arrested in Murders of 3 Children 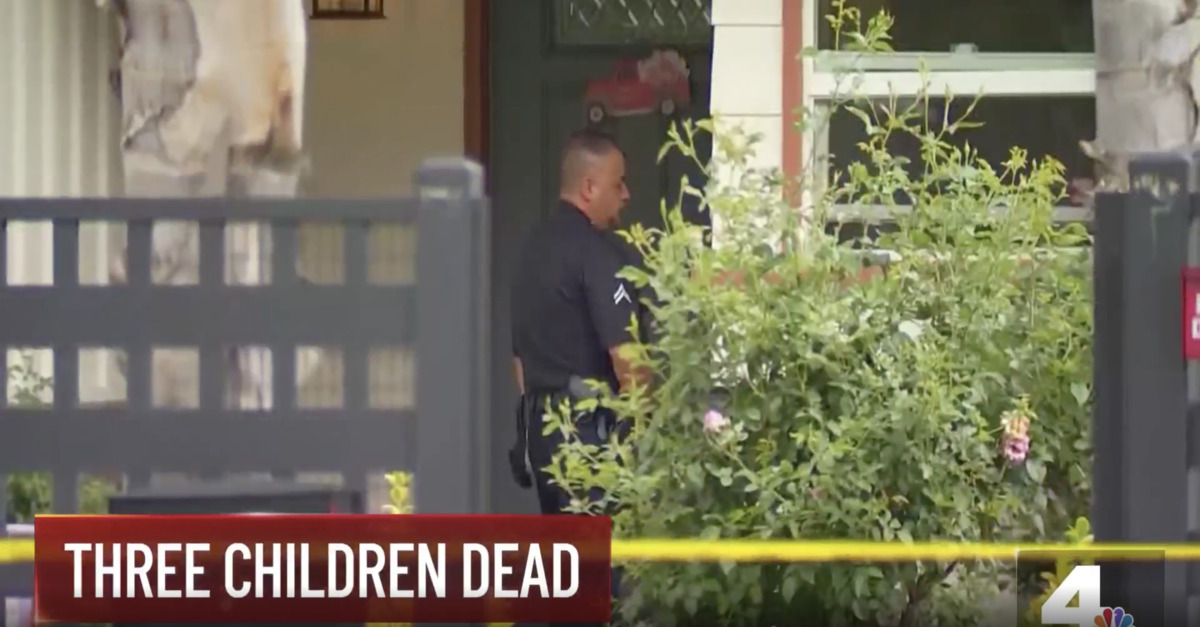 A California mother and a minor boy were arrested after the woman’s three children were found dead in a suburban neighborhood of Los Angeles over the weekend.

Angela Flores, 38, stands accused of murder over the massacre. The incident occurred at a house on Victory Boulevard, a well-known and highly-trafficked thoroughfare in the City of Angels. Some media outlets have described the residence as being in the West Hills, others have placed the location in Woodland Hills. Both neighborhoods are predominantly residential and located within the San Fernando Valley.

Flores was arrested late Sunday night after initially being questioned by police that morning, according to the Los Angeles Times.

“No other suspects are being sought at the moment,” LAPD Public Information Officer Matthew Cruz told the paper.

The Los Angeles County Sheriff’s Department released the information about the secondary arrest on Monday morning.

According to law enforcement, the victims are a 12-year-old girl and a two 8-year-old boys. They were all declared dead at the scene of the crime. The names of the children have yet to be made public.

Police were called to the house around 7:40 a.m. on Sunday in response to numerous 911 calls about an assault with a deadly weapon. There, the three unresponsive children were discovered. The abused child unit of the LAPD’s Juvenile Division is reportedly currently working to ascertain the victims’ time and cause of death.

Neighbors cited by local media outlets convey a grim and disturbing picture in the moments before the violence.

“I figured she was just in the wrong place,” neighbor Prisila Canales told Los Angeles CW affiliate KTLA, “mentally not OK, but it ends up being she lived two houses down from us.”

Canales said she heard Flores screaming out in victimization at the top of her lungs late Saturday night: “My family is abusing me!”

“The screaming you heard; you knew she was not okay,” she told the LA Times. “I can still hear her screaming.”

“I thought I was just dreaming,” a neighbor who only identified himself as John told the paper, saying he heard the muffled cried of a child on Sunday evening, as Mother’s Day was ending.

“They look like nice, normal people,” neighbor Stephen Hayes told the LA Times. “It is one of the nicest-looking houses on the block.”

Authorities were even called to the home that same night, Canales said, recalling that emergency personnel had attempted to put Flores on a stretcher after she walked into a different neighbor’s yard with a Bible and began to light candles.

“Where’s my Bible?” the defendant allegedly asked as she tried to break free from that mental health response team.

“I kept hearing ‘my family is abusing me’ and (I) just kept hearing screaming but I couldn’t make out what she was saying,” Canales told West Coast ABC flagship KABC.

Flores faces three separate counts of murder. She is being detained on $6 million bail, according to West Coast NBC flagship KNBC.

According to West Coast Fox flagship KTTV, the minor arrested is Flores’ teenage son and he is believed to have been involved in the killing of his siblings. He was reportedly taken into custody after being seen running towards a neighbor’s house. He is in a juvenile lock-up facility.

“Flores admitted to killing her children with the assistance of the 16-year-old subject,” the LAPD told KNBC and KTTV.