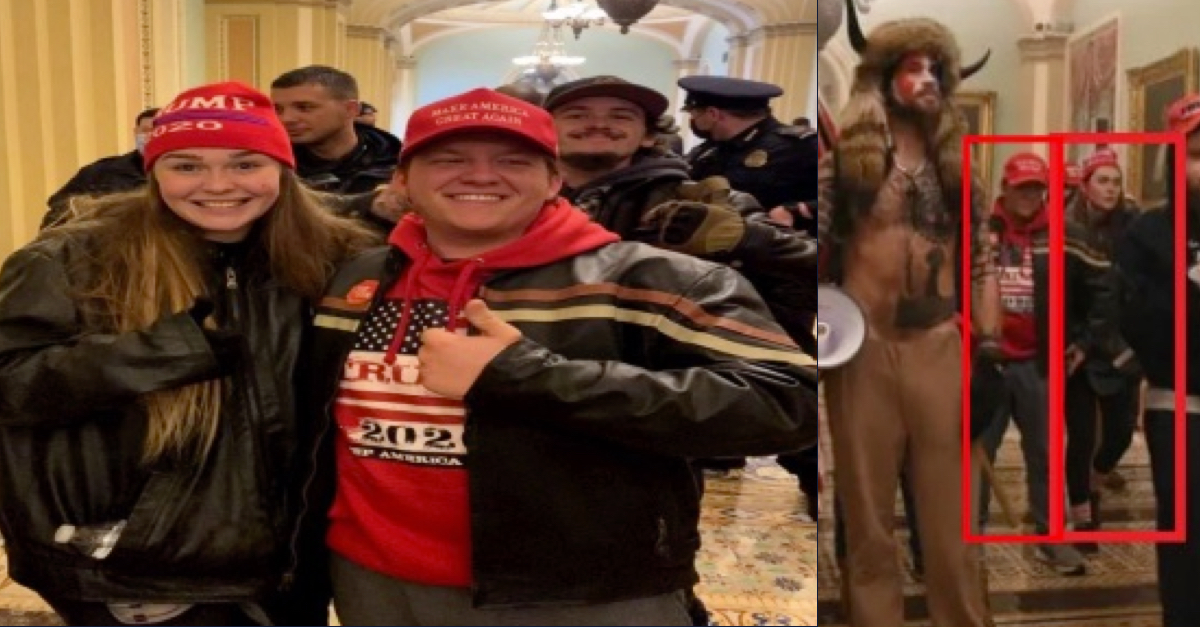 Nolan Kidd and Savanna McDonald in the Capitol on Jan. 6, in one picture seen next to Jacob Chansley, aka the “QAnon shaman.” (Images via FBI court filings.)

A Georgia man who praised rioters who overran police at the U.S. Capitol on Jan. 6 and later bragged about being being one of the first people to breach the building has been sentenced to more than one month behind bars.

Nolan Kidd was 21 years old when he and his girlfriend, Savannah McDonald—now his co-defendant—drove through the night from Georgia to Washington, D.C., in order to attend Donald Trump‘s so-called “Stop the Steal” rally. The couple then joined the march toward the Capitol building, with Kidd recording and sharing his thoughts as the crowd grew increasingly violent.

“We broke in, we own this building, this is our house, they can tear gas us all they want, we own it,” he recorded himself saying once inside the building.

He continued celebrating the next day.

“Me and Savannah are FUCKING STORMTROOPERS,” he said in a conversation on Snapchat on Jan. 7, according to the government’s sentencing memo, later bragging that he and McDonald “went farther than almost anyone into the building.” It is unclear whether the couple had been analogizing themselves to Adolf Hitler’s paramilitary wing (a.k.a. Sturmabteilung or colloquially, Brownshirts) or the forces of the evil, Galactic empire in the Star Wars series.

Kidd pleaded guilty in January to one count of parading, demonstrating, or picketing in a Capitol building.

On Monday, he was sentenced to 45 days in jail.

U.S. District Judge Christopher Cooper said that while Kidd does not appear to have participated in any physical violence or property destruction, his actions that day were also “more serious” than those of many other Trump supporters who joined the mob that swarmed the building, temporarily forcing Congress to stop the certification of Joe Biden‘s 2020 electoral win.

“You were part of the first wave of folks through the doors, as you yourself bragged about,” Cooper said, noting that Kidd admitted to knowing that tear gas had been deployed, hearing sirens, and seeing broken glass. “You saw people hit with pellet balls, so you knew law enforcement wasn’t inviting you in.”

At the hearing, Kidd said that the fact that he and McDonald were pictured next to Jacob Chansley, the so-called “QAnon shaman,” was just coincidence.

“The QAnon shaman, we didn’t know who he was at the time, obviously,” Kidd said. “We just thought it was some weird guy.”

Kidd also noted that he took the phone number of someone else he seen who appeared to be carrying “what looked like a cannon ball covered in shards of glass” and shared that with the FBI.

“As soon as I realized he actually broke something, that wasn’t the kind of person I wanted to be involved with,” Kidd said.

“I don’t think a term of probation is really appropriate for you,” Cooper said. “You’re not the type of person who [needs] supervision. You’ve sought out [health treatments] on your own. You don’t need probation’s help to seek out services if you need them.”

Kidd faced up to six months in jail, five years of probation, and a fine of up to $5,000. In issuing a sentence of jail time only, Cooper avoided addressing the legality of “split sentences,” a sentence of jail time followed by probation. The D.C. District judges overseeing the Jan. 6 cases have been divided on the issue, and Cooper, a Barack Obama appointee, has said he is waiting for a higher court to weigh in.

Kidd will also pay $500 in restitution toward the estimated $2.7 million in damage caused to the Capitol that day.

At the end of the hearing, Cooper had encouraging words for Kidd, despite having just ordered that he ordered to spend more than one month behind bars.

“You are a young man. Obviously this was a huge mistake, but it’s one that I’m confident you can overcome,” Cooper said, adding that because there is no probation, Kidd wouldn’t have to have further contact with the court after jail. “I wish you good luck. You seem to have a fairly stable life right and I hope that you can put this behind you and get on with your life and not engage in any further nonsense like this going forward.”