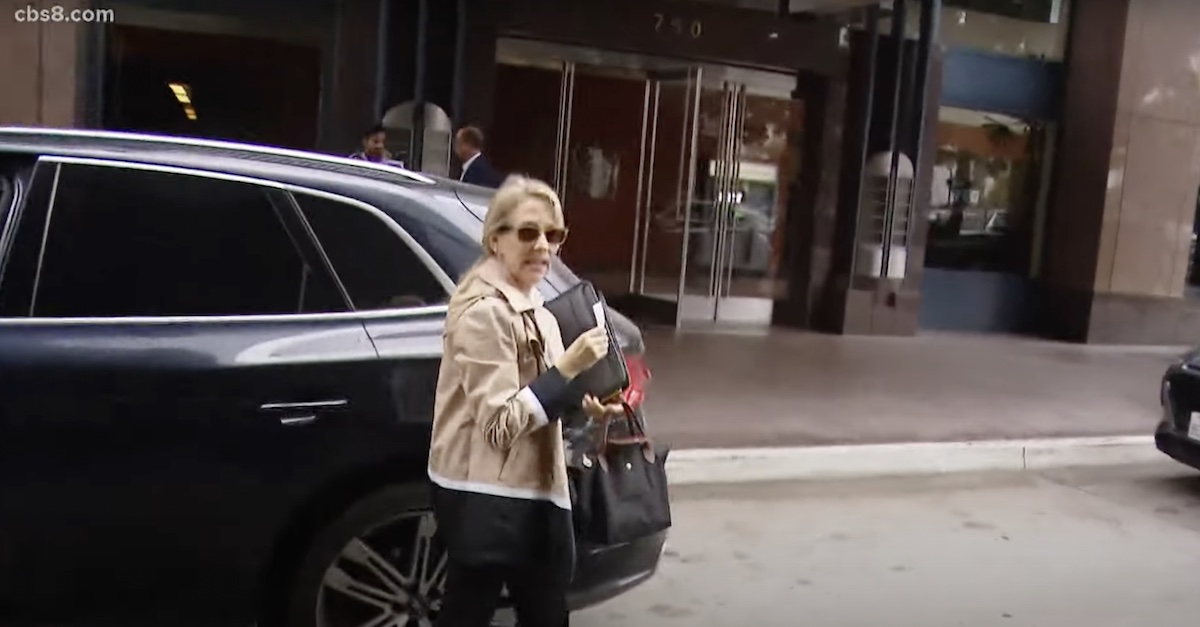 A former television executive and parent serving home detention following her conviction in the college admissions scam known as “Operation Varsity Blues” has been denied a chance to watch her daughter graduate from law school in person. Prosecutors called Elisabeth Kimmel’s request “perverse,” and the judge denied the convicted felon’s request without comment.

Kimmel, the 57-year-old former owner of San Diego-based KFMB Stations, a local television station group, has been serving out home detention in what prosecutors described as an “8,000 square-foot penthouse condominium.”

“The defendant has served approximately two months of her one-year term of home confinement,” prosecutors noted. “Other than limited exceptions, including medical appointments and treatment, the defendant is prohibited from leaving her 8,000 square-foot penthouse condominium, where she is serving the remainder of her sentence.”

Prosecutors said this was no routine request to travel because Kimmel is not on supervised release but, rather, is serving home detention as an alternative to incarceration. What’s more, the crime to which Kimmel pleaded guilty was conspiracy to commit mail and wire fraud — in connection with her daughter’s admission into Georgetown University and her son’s admission to the University of Southern California.

In both cases, Kimmel conspired with “Varsity Blues” scam mastermind William “Rick” Singer and others to get her kids into desired higher education institutions on the heels of outright lies about their athletic achievements:

As set forth in the charging document, Kimmel agreed with William “Rick” Singer and others to pay $275,000 to facilitate her daughter’s admission to Georgetown University by having Georgetown tennis coach Gordon Ernst allegedly allocate a tennis admission slot to her daughter, even though she was not a competitive tennis player and was not actually being recruited to play on the Georgetown tennis team. Kimmel further agreed with Singer and others to pay $250,000 to facilitate her son’s admission to the University of Southern California as a pole vault recruit, even though he was not a pole vaulter.

Prosecutors said it would simply be “perverse” to allow Kimmel to celebrate the fruits of her crime:

The government is sensitive to the fact that the defendant may miss her daughter’s graduation from law school in-person and other life events while serving her sentence. But that is true for each of the hundreds of criminal defendants sentenced in this District every year, ranging from violent offenders to white-collar criminals. As a consequence of their choices and conduct, they are absent for family births, deaths, graduations, and the like.

The defendant is no different, and she should be treated no differently. Indeed, it would be a perverse result to allow the defendant to be released from custody to attend and celebrate the higher-education accomplishments of her children, even though her fraud, bribery, and lies relating to her children’s college admission are why she is serving a federal sentence as a convicted criminal in the first place.

“KIMMEL’s daughter’s application to Georgetown stated that she played ‘Southern California Junior Tennis’ throughout high school and was a ‘ranked player,'” documents said. “In fact, the United States Tennis Association, which operates the Southern California Junior Tennis program, has no record of KIMMEL’s daughter’s participation in that program.”

Kimmel’s daughter “was not a member of the tennis team during her four years at Georgetown,” where she graduated in 2017. Fast forward to 2022, and Kimmel’s daughter is graduating from the University of Illinois College of Law.

Kimmel also admittedly conspired to get her son in USC by lying about him being a high school pole vaulter.

Kimmel agreed to plead guilty in August 2021 and was sentenced in December 2021 to six weeks behind bars; two years of supervised release; and 500 hours of community service. Kimmel was further ordered to pay a fine of $250,000 and to serve the first year of her sentence in home confinement.

“How can you be standing before me a convicted felon after all the advantages you had in your life?” U.S. District Judge Nathaniel Gorton reportedly asked Kimmel at sentencing.

Judge Gorton, who has been consistently tough on “Varsity Blues” defendants, denied Kimmel’s request to travel without providing any reasoning. As you can see, all the judge did was write “motion denied,” along with his signature and the date on the order: 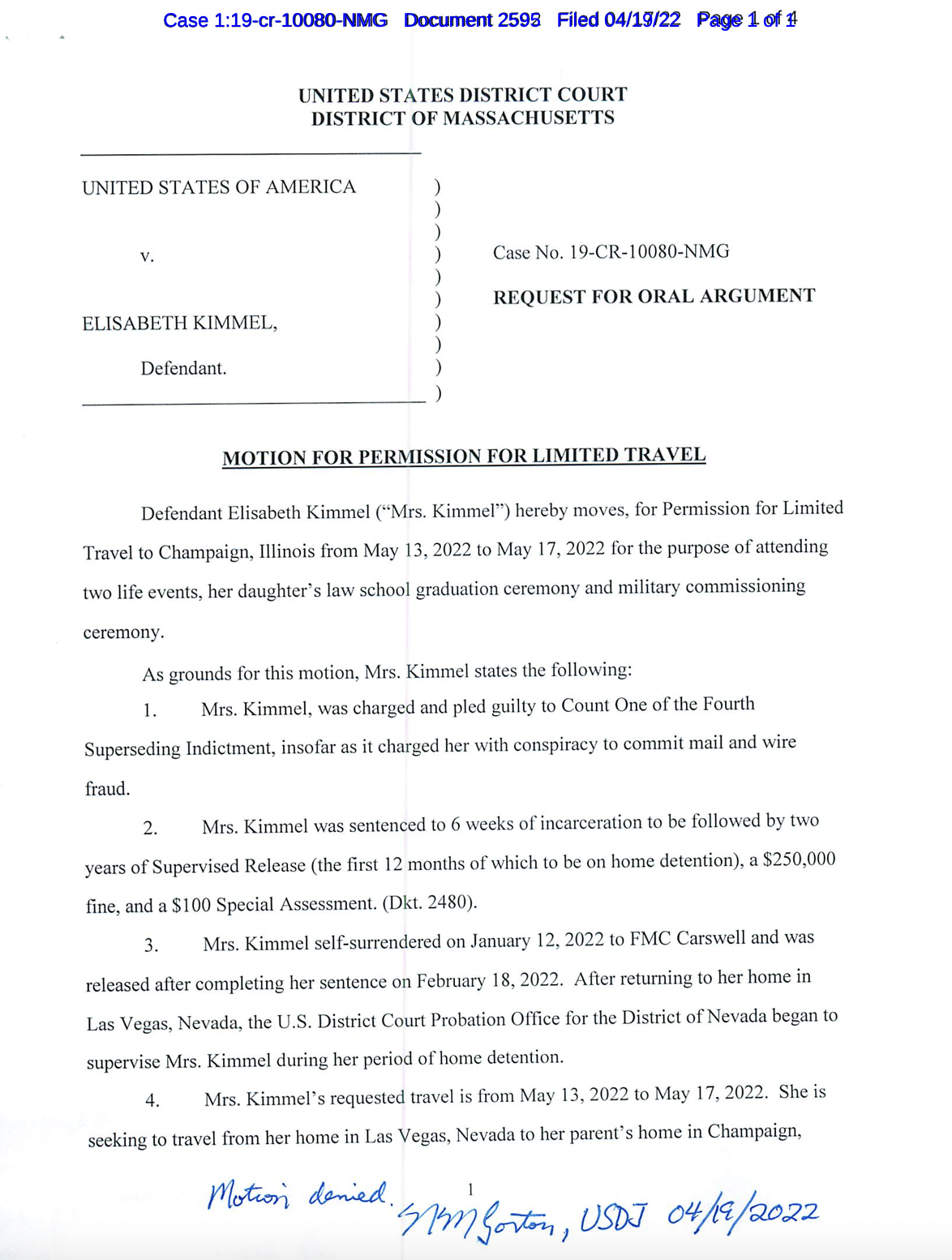 Prosecutors had emphasized that the defendant didn’t end up actually up serving time behind bars due to medical issues—which they accommodated her for by agreeing to home detention as an alternative to a stint in the custody of the Bureau of Prisons.

“Indeed, but for the defendant’s ‘debilitating’ medical circumstances (of which her motion to travel makes no mention), the government would have asked the Court to impose a significantly longer period of incarceration, likely one that she would still be serving in a BOP facility, in order to adequately punish the defendant and avoid unwarranted sentencing disparities,” prosecutors wrote in opposition to Kimmel’s motion. “The defendant’s 12-month term of home detention—of which she has served less than a quarter—was intended to satisfy those sentencing goals while minimizing risks to her health, not as a slightly more restrictive form of probation.”

The government concluded by saying that Kimmel doesn’t deserve special treatment, and pointed to Mossimo Giannulli’s case to provide some perspective on the inappropriateness of her request:

As the Court is aware, several defendants who engaged in similar or less culpable conduct—and who accepted responsibility for their crimes earlier than the defendant—were sentenced to longer terms of incarceration. See, e.g., United States v. Giannulli, 19-cr-10080- NMG, Dkt. 1493 (imposing five-month sentence on defendant who engaged in two side-door deals and pled guilty one year before Kimmel); but see Dkt. 1699 (denying Giannulli’s motion for release to home confinement due to pandemic and fact that he spent first two months of sentence in solitary confinement).

Prosecutors also suggested that Kimmel watch the law school graduation on a livestream from her penthouse.

Read the government’s motion below: