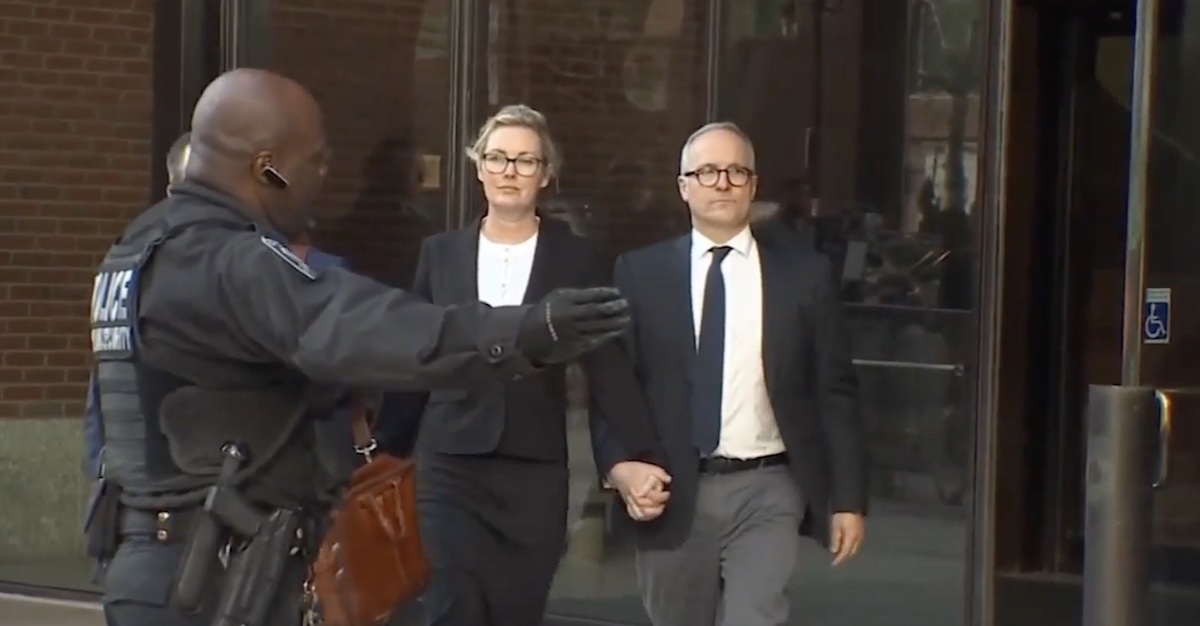 Amy Colburn, Gregory Colburn, pictured in 2019 after charges came down.

Although it’s been more than three years since the Department of Justice first came down with charges against the wealthy and well-connected in the college admissions scandal known as “Operation Varsity Blues,” the hits keep on coming.

Dr. Gregory Colburn, 63, and Amy Colburn, 52, are no Lori Loughlin, Mossimo Giannulli, or Felicity Huffman in terms of their recognizability around the globe, but the Silicon Valley couple stood out in their community. Dr. Colburn, a radiation oncologist, and Amy Colburn, who owned an interior design business, admittedly sullied that good standing by abusing their substantial means to commit a federal crime.

Prosecutors said—and the defendants admitted—that the Colburns conspired with college admissions scam mastermind William “Rick” Singer and others to defraud the College Board. The Colburns agreed to plead guilty in December 2021 to conspiracy to commit mail and wire fraud and honest services mail and wire fraud.

The wealthy couple’s crime was paying $25,000 to Singer’s sham charity under the guise of helping “underserved kids.” That money, in reality, was used to help their well-off son get a top SAT score. The money was used to pay off Igor Dvorskiy, described by DOJ as a “corrupt test administrator.” Dvorskiy in turn allowed Mark Riddell, “a corrupt test ‘proctor,'” to correct the SAT answers of the Colburns’ son.

While Riddell has already been sentenced for his role in the scandal, Singer and Dvorskiy are still waiting to learn their fates.

The Colburns were implicated alongside many other parents in the massive scandal from the start.

Unbeknownst to the Colburns, the government recorded a phone call they had with Rick Singer. On that call, they agreed to lie about why they donated to Singer’s foundation, “The Key.”

The government busted many defendants in the sprawling and historic prosecution by having Singer call up his clients about a fake IRS audit of his foundation. On the calls, Singer would inevitably get the defendant(s) to agree to say that their donation was for something other than what it was for—in the event that the IRS started asking them questions. In this case, the Colburns agreed to say the money was to “help underserved kids.”

“Right. It was to help underserved kids. Correct,” Gregory Colburn said at the end of the call. “Got it. No problem.”

It turned out to be a large problem.

Boston-based U.S. District Court Judge Nathaniel M. Gorton, known for being a no-nonsense jurist and stiff sentencer, ordered the Colburns on Thursday to serve eight weeks each behind bars. They must also serve a year of supervised release, perform 100 hours of community service, and pay a fine of $12,500.

Gorton reportedly slammed the defendants for their “brazen” and “frankly stupid conduct.”

In a sentencing memo, prosecutors called the defendants “highly-educated, multi-millionaires.” The government specifically called out the Colburns by sharing words the defendants wrote years ago—in a letter complaining about cheating that was going on at their son’s school high school [italics as they appear in the filing]:

“Since the tests are graded on a curve, this cheating scandal not only affects the cheating students, but everyone else’s grades in the class. . . . As a parent of a student taking this course, and for all [high-school] students and parents, it is important that the school be seen not only handing out appropriate consequences to those students who cheated, but to be seen making grade reparations to all the honest students who have been adversely affected by this scandal.” See Ex. A. Those are the words of the defendants Amy and Gregory Colburn, when they thought others were watching.

That is what the defendants wrote to teachers at their son’s high school in 2015 when they learned that several students in their older son’s high school were accused of cheating on calculus tests. Just a few years later, the defendants paid Singer a $25,000 fake donation to bribe two individuals to cheat on their younger son’s SAT exam, lied about the payment on their taxes, and then agreed to lie to cover-up their crimes.

The audacity it took for the defendants to publicly accuse children of cheating when it disadvantaged their own son, and then privately engage in cheating, fraud, and bribery to benefit their other son, encapsulates the causes of the college admissions scandal and Varsity Blues cases. For an array of reasons—self-aggrandizement, arrogance, and a belief that the rules do not apply to those with wealth and privilege—the defendants knowingly chose to break the law and engage in conduct that they obviously knew was wrong.