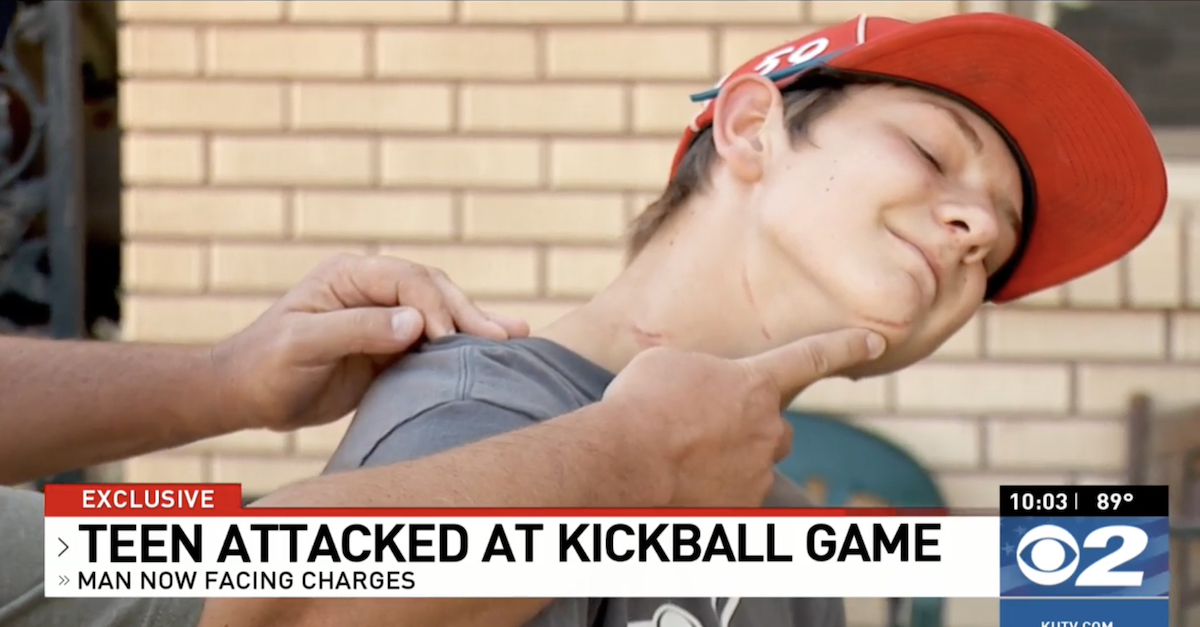 The 13-year-old boy who was allegedly attacked by Christopher Wiggins shows his injuries during an interview with KUTV.

A 34-year-old Utah man was arrested this week beating up a child during a town kickball tournament, police say. Christopher Scott Wiggins, of Garland, was taken into custody on Wednesday and charged with one count of third-degree felony child abuse for allegedly putting a 13-year-old boy in a headlock and slamming him to the ground during the game.

According to a press release from the Tremonton-Garland Police Department, officers at approximately 9:38 p.m. on Wednesday responded to a 911 call at Garland City Park located at 500 E 100 N. The caller told dispatch that there had been a disturbance during a kickball game being held in conjunction with Garland City Days festivities.

Upon arriving at the scene, witnesses told police that there had been “an incident” between a 34-year-old male, later identified as Wiggins, and a 13-year-old boy.

“During the game the 13-year-old was running from third base to home, when the adult male grabbed the 13 year old, and put him in a headlock choking him, and taking him to the ground,” Interim Chief of Police Brian Crockett said in a press release. “The individuals continued to struggle on the ground until they were separated. This incident was witnessed by multiple bystanders and players.”

According to a probable cause affidavit reviewed by Law&Crime (1:29 in the KUTV video), the child told police that Wiggins “grabbed [him], put [him] in a headlock/chokehold, repeatedly yelled profanities at [him], and then in the choke slammed [him] to the ground.” The boy said Wiggins then “continued to wrestle” with him until his father finally separated them.

By the time officers had arrived at the park, Wiggins had left the area. Officers were able to locate him at his residence later that evening. During an interview with investigators, Wiggins allegedly “expressed remorse and regret for what happened and claimed that he was only “trying to protect his child who was playing the catcher position from being ran over by the 13-year-old.”

‘[Wiggins] stated he was embarrassed, shouldn’t have done it, and that he was wrong,” the affidavit states. Wiggins also allegedly confirmed that he “grabbed the victim by the chest and threw [him] to the ground, where they were for approximately 30 seconds.”

Following the interview, officers placed Wiggins under arrest and booked him into the Box Elder County Jail at approximately 11:36 p.m.

The father of the 13-year-old boy spoke with Salt Lake City CBS affiliate KUTV about the incident, saying that his son and Wiggins “collided” after the child rounded third base.

“The guy grabs him, puts him in a headlock, chokes him, throws him to the ground. I told him ‘let go of my son, let go of my son’,” David Richards reportedly told the station. “He could have seriously hurt him. This is a 30, 40 year old man on a 13-year-old kid, it’s unacceptable. Being an adult, you need to have a level of restraint.”

Appearing on camera, the teen appeared to have cuts and bruises on his face, neck, arms, knee, and chest.

Online records show that Wiggins was transferred to another detention facility on Thursday. It is not clear if he is still in custody.

Read the police press release below.