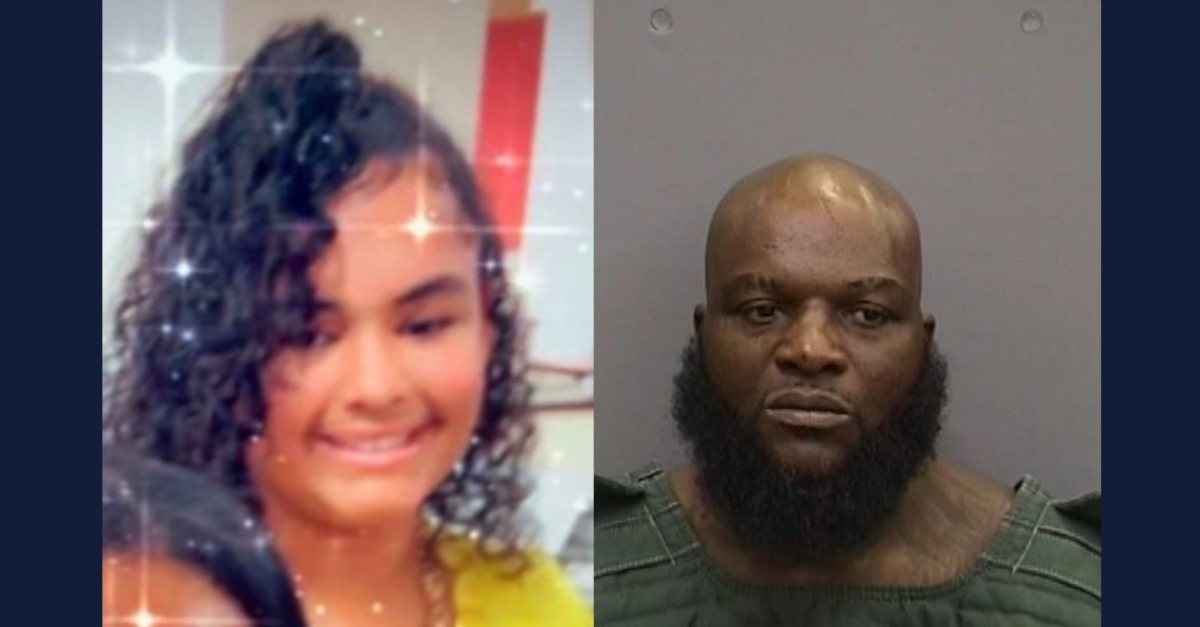 A man who was convicted of manslaughter in the 2003 shooting death of Florida woman has been accused of murdering a 14-year-old girl.

Ronny Tremel Walker, 44, is charged with the murder of Nilexia B. Alexander, 14, authorities announced in a press  conference Friday. He’s accused of killing the teenage girl in May, leaving her dead in a vacant field.

Nilexia was found dead by the road near the 100 block of Floribraska Avenue in the early morning of May 6, police said. The person who called 911 reported hearing gunfire, went outside, and found a young girl lying outside on the ground, Deputy Police Chief Calvin Johnson told reporters. Officers responded at 3:58 a.m., he said. Police described Nilexia as a “runaway.”

Ashley, between sobs, also thanked Tampa police, detectives, and members of the community who called in tips.

“I thank everyone who was able to bring this person to justice,” Ashley said. “I thank you. It won’t bring my baby girl back, but it will give me some peace that he’s off the streets, and a little bit of closure.”

Officials said that investigative techniques enabled detectives to tie Walker’s vehicle to the vehicle that was in the area during the time Nilexia’s death. Additionally, cell phone evidence placed the victim inside Walker’s vehicle around the time of the homicide, authorities said.

Investigators executed a search warrant on Walker’s vehicle and turned the evidence over to the Florida Department of Law Enforcement, according to authorities. That resulted in positive tests for Nilexia’s DNA, officers said.

Emphasizing the ongoing investigation, Johnson declined to specify why police believe this killing was premeditated.

Walker was previously convicted of manslaughter for the 2003 shooting death of Elaine Caldwell, 45.

During the press conference, State Attorney Andrew Warren acknowledged Walker’s prior homicide conviction. Records show he was previously in prison for manslaughter by culpable negligence.

Prosecutors said he was the armed man who stormed a home on Oct. 23, 2003, fatally shooting Caldwell after she saw his gun and did not stop screaming. Walker was originally charged in 2009 with first-degree murder, but that trial ended in a hung jury, according to a ruling from the Florida Second District Court of Appeal. The state tried him again for second-degree murder, and jurors this time convicted Walker of manslaughter.

That conviction was overturned when the Florida Second District Court of Appeal determined that most of the evidence connecting Walker to the crime was flimsy.

The opinion noted, for example, that Caldwell’s boyfriend, who witnessed the shooting, named Walker as the suspect based on identifying information from an unknown third party, which prosecutors referenced multiple times throughout the trial. The appellate court ruled that this was inadmissible hearsay.

The judges also noted other weaknesses in the state’s case against Walker at the time.

“[T]he evidence against Walker was tenuous because there was no physical evidence connecting Walker with the crimes and his identification was significantly impeached,” then-Chief Judge Morris Silberman wrote. “Furthermore, some of the evidence was actually inconsistent with Walker’s being the perpetrator. The perpetrator had told the nine-year-old victim that he had two daughters at home, but Walker has sons. And while Walker’s fingerprints were not found at the scene, a palm print of an unidentified third party was found.”

“After the manslaughter conviction was overturned, Walker pled guilty to manslaughter with a firearm, burglary of a dwelling and robbery with a firearm and was sentenced to 8 years in prison followed by 7 years of probation,” Warren’s Policy Advisor Jordan Teuber said in an email.

Walker ended up serving four more years behind bars for violating the terms of his probation by drinking alcohol, Warren also said.

“If he would’ve been in prison, he would have never had a chance to kill this baby,” Caldwell’s daughter Veronica Denson told WFLA. “He killed a baby, 14 years old.”

Walker is locked up without bond at the Hillsborough County Jail.