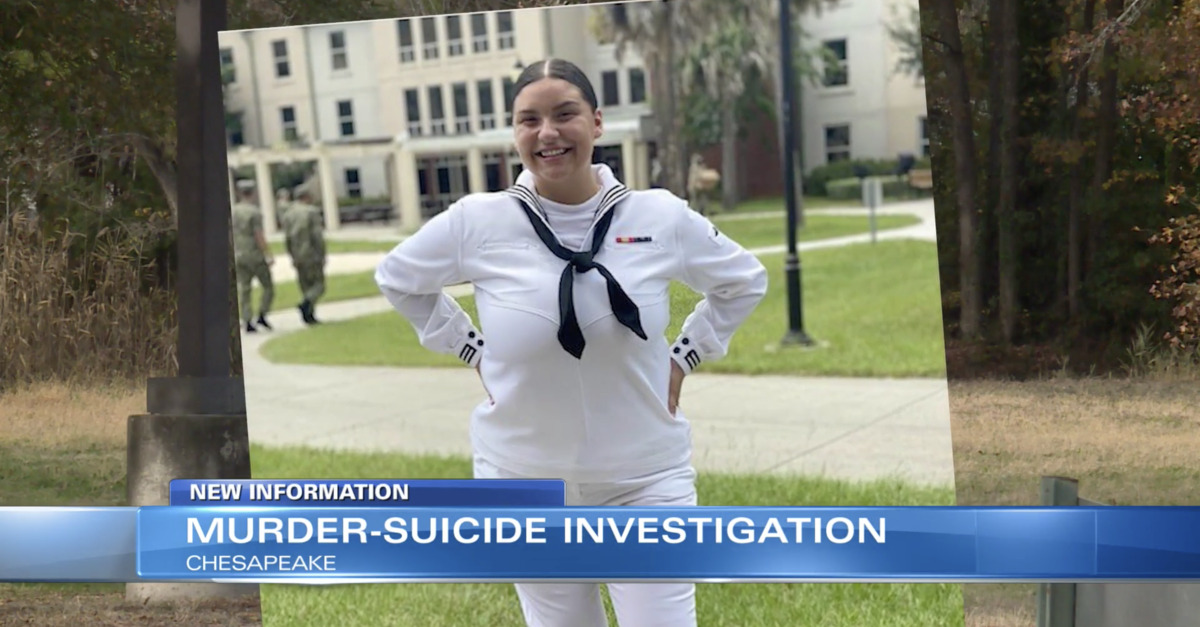 A sailor in the U.S. Navy shot was killed and killed by her husband on the way home from a McDonald’s restaurant over the Thanksgiving weekend. She was the victim of a long and unreported history of domestic violence, her mother said.

According to the Chesapeake Police Department, 22-year-old Collin Earl Smith-Aiken shot his wife, 20-year-old Aniece Marie Gonzalez, from the passenger seat of their car in the city late Saturday night — while she was driving near a tire shop located at the intersection of George Washington Highway North and Canal Drive.

After the car came to a stop, the murderer then stepped out, walked around briefly, and shot himself.

According to Norfolk, Va. NBC affiliate WAVY, a man name Chuck Brown said he saw the tail end of the macabre incident unfold from a 7-Eleven convenience store across the street. A second witness, who declined to be identified, said he heard three quick shots.

Brown said he walked out of the store just as the quick flurry of gunfire stopped. Then something strange happened.

“Someone was laying on the ground,” the witness told the outlet during a Monday morning interview. “He got up, the ambulance came, he got up on his own and then they put him on a stretcher.”

Police claim they were closing in on the scene of the crime just as Smith-Aiken turned his gun on himself. The killer died a few hours later in a nearby hospital.

“We crumbled to our knees and our family is broken,” Margaret Smith, the victim’s aunt, told local ABC affiliate KVEC. “She had a big bright star that she led life by.”

“Nothing is good about this,” Smith continued. “Nothing good. It wasn’t just one person, two people that were impacted. There are a lot of people that are hurt.”

The two Virginians hailed from Portsmouth and were married at the time of the violence that also left a third person mildly injured.

According to law enforcement, the gunman shot at another driver who sustained injuries so minor that she didn’t seek medical attention. After that, police said, he killed himself.

Additional details released by police on Thursday suggest Gonzalez was shot in the head by her husband just after they got their food.

“She hid it so very well,” Candice Acampora told WAVY in a recent interview.

According to the grieving mother, her daughter’s killer got angry with Gonzalez on Thanksgiving night in the Portsmouth, Va. apartment they shared with the victim’s sister.

“He broke her phone and threw her around a little and broke the TV, and my husband’s first thing was, ‘Well, did you call the police?’”

“She told me more details that he had pulled a gun on her before,” Acampora continued. “On Friday, she sent me two pictures, one of which was back-dated in August, where he had given her a black eye. She was really good at makeup, and I never noticed this.”

The next day, Gonzalez kicked her husband out of the apartment, her mother said. The mother then advised Gonzalez to report the abuse to her commanding officer. She apparently did so sometime on the last day of her life. Later that same night, Smith-Aiken called. He said he was cold, hungry, and wanted McDonald’s.

Then there was a knock on Acampora’s door on Sunday morning.

“Just like in the movies, there were two gentlemen in uniform at the door with their hats on, and they pulled their hats down and I just fell to the floor, and I just knew at that point,” she said, “It’s always bad news, and I lost it.”