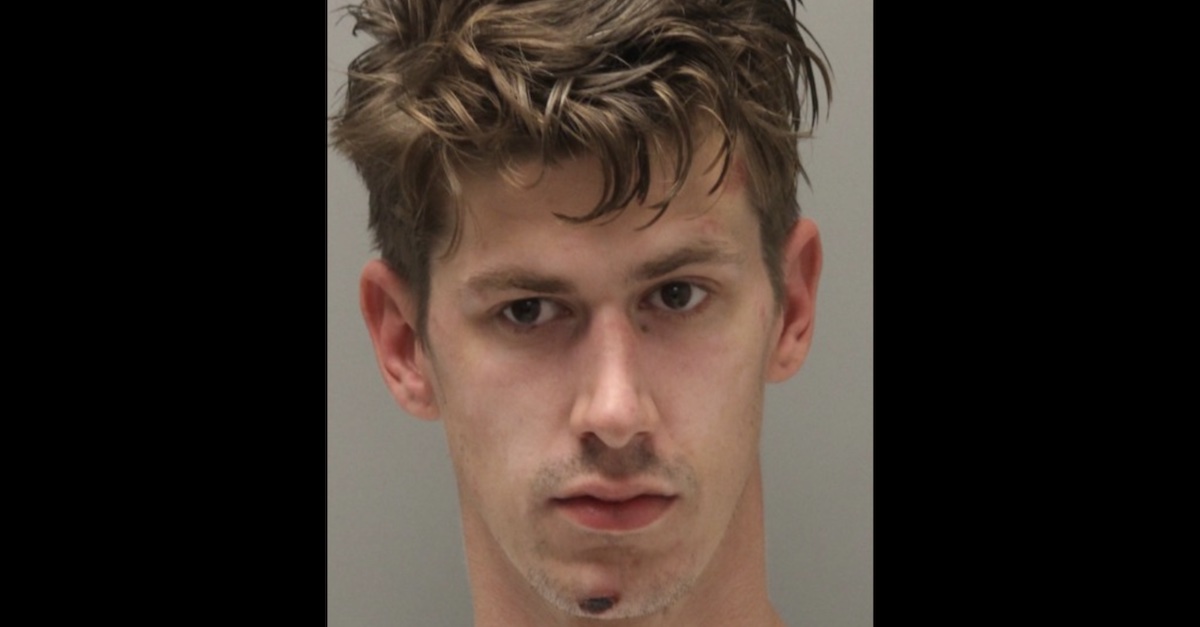 State cops say that the suspect, identified as John Collins of Perryville, had a passenger in the tow truck at the time. Gabrielle Santucci, 26, was also arrested and booked but on less serious charges.

The police narrative of the incident is that Collins set off an alarm at Hertrich Collision Center in Bear, Delaware around 2:45 a.m. on Nov. 29 when he showed up in a tow truck reported stolen from York, Pennsylvania. Not long after that, a trooper spotted the suspect at a dead end. Instead of stopping, Collins allegedly stepped on the gas and crashed into the trooper’s vehicle head-on.

“The reporting person for the business advised a subject operating a rollback tow truck entered the parking lot and was going through vehicles,” a state police press release said. “The responding trooper canvassed the area and located the suspect vehicle in the Brandywine Woods development. The trooper attempted to make contact with the suspect at a dead end in the development.”

“The suspect then drove the tow truck directly towards the state police vehicle and struck it head on causing disabling damage. The seven-year veteran trooper injured from the collision was treated and released from an area hospital,” authorities continued.

The damage did not stop here and only escalated, cops said.

The tow truck then exited the development and began travelling west bound on Pulaski Highway. A responding trooper observed the suspect vehicle and a pursuit ensued. During the pursuit, a trooper who was stationed in the median strip was intentionally struck by the suspect who drove the tow truck into side of the marked State Police Tahoe, disabling it.

Following the collision, the suspect fled westbound in the eastbound lane of Pulaski Highway until it turned into Elizabeth Plaza Shopping Center located at 1410 Pulaski Highway. The vehicle traveled to the rear of the shopping center parking lot and stopped. A third state police vehicle occupied by two troopers, one being a recruit trooper, located the tow truck and initiated a traffic stop. As the two troopers exited their patrol car, the suspect accelerated the tow truck in reverse striking the fully marked State Police Tahoe. The recruit trooper who was trying to exit the vehicle on the driver side was thrown from the vehicle.  The tow truck then started to accelerate forward when the 10-year veteran trooper fired rounds from his divisional issued handgun at the defendant and into the vehicle. The tow truck travelled to the front of the shopping center where it crashed and became disabled.

After the tow truck came to a stop, both Collins and Santucci allegedly tried and failed to escape on foot. They were arrested. State cops said a recruit trooper was released from a hospital after being treated for injuries sustained by being thrown from his cruiser.

His bond as been set at more than $3 million.

At this time, Santucci only faces minor charges by comparison: attempted theft under $1,500, third-degree conspiracy, and second-degree criminal trespass.

Records reviewed by Law&Crime show that Santucci was booked on Monday evening at the Baylor Women’s Correctional Institution. Her bond was set at $2,500.