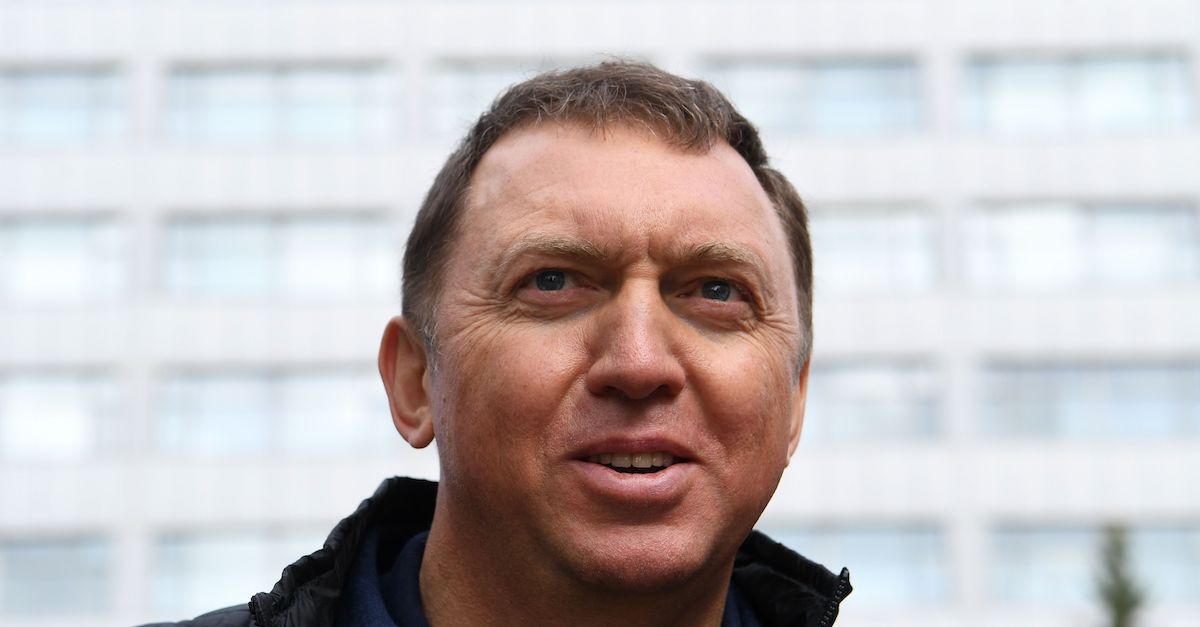 Russian tycoon Oleg Deripaska speaks to the media outside his carmaker GAZ plant in Nizhny Novgorod on April 16, 2019. (Photo by KIRILL KUDRYAVTSEV/AFP/Getty Images)

Property manager Graham Bonham-Carter, the scion of a prominent British family and the second cousin of actress Helena Bonham-Carter, was arrested on Tuesday in the United Kingdom in connection with the alleged scheme, the Department of Justice announced.

The U.S. government plans to seek his extradition to the Southern District of New York, where Deripaska, two of his associates, and his girlfriend were charged last month. The earlier indictment accused Deripaska’s associates Olga Shriki and Natalia Mikhaylovna Bardakova of helping the energy tycoon try to duck U.S. sanctions through various schemes. Shriki and Bardakova allegedly tried twice — once, successfully — to arrange for Deripaska’s pregnant girlfriend Ekaterina Olegovna Voronina give birth to the oligarch’s child on U.S. soil, for the baby to attain citizenship.

Bonham-Carter’s charges focus on a different dimension of the alleged sanctions-busting conspiracy: the international real estate and art worlds.

“The international real estate market, and its infamous opacity, afforded Bonham-Carter no shelter from the diligence and expertise of U.S. law enforcement and our partners,” Andrew Adams, the director of the Justice Department’s Task Force KleptoCapture, said in a statement. “Others who would attempt to move illicit money through international markets should take notice: neither powerful connections nor sophisticated deceptions succeeded in hiding Bonham-Carter’s efforts to illegally service a sanctioned oligarch.”

Prosecutors say that Bonham-Carter has worked for Deripaska from July 2003 through the present. Since the beginning of his employment, Deripaska’s standing has changed in the eyes of the U.S. government. In 2018, the Treasury’s Office of Foreign Assets Control designated Deripaska “for having acted or purported to act for or on behalf of, directly or indirectly, a senior official of the Government of the Russian Federation.” Deripaska, often described as a close ally of Vladimir Putin and the former president of En+ Group, was also sanctioned for his role operating the energy sector of Russia’s economy.

“Deripaska has been investigated for money laundering, and has been accused of threatening the lives of business rivals, illegally wiretapping a government official, and taking part in extortion and racketeering,” the Treasury noted. “There are also allegations that Deripaska bribed a government official, ordered the murder of a businessman, and had links to a Russian organized crime group.”

Even after Deripaska’s designation, prosecutors say, Bonham-Carter engaged in over $1 million in illicit real estate transactions for the oligarch, which were managed by a company named Gracetown, Inc.

According to the latest indictment, Bonham-Carter wrote in an email dated the month after the Treasury’s designation that Deripaska wanted him to “set up my own company to run the [Belgravia Square] house and to possibly include Japan, Italy, China and more.”

Prosecutors quote another email appearing to show that Bonham-Carter was aware that his “boss” was sanctioned.

“Times a bit tough for my boss as sanctions have hit him from the USA so not an ideal time,” Bonham-Carter allegedly wrote on June 18, 2018.

According to the indictment, Bonham-Carter wired $1,043,964.30 from a bank account in Russia held in the name of GBCM Limited to bank accounts held by Gracetown Inc. in New York City. Gracetown Properties, in turn, paid for expenses like staff salaries, taxes, and other services, prosecutors say.

Another part of the indictment deals with 18 pieces of artwork that Deripaska allegedly bought in 2008, through a shell company called Turcos Limited.

When the auction house sent Bonham-Carter a May 2021 letter relaying suspicions that the artwork belonged to Deripaska, Bonham-Carter allegedly covered for his boss.

“The funds and the property do not belong to Mr[.] Deripaska,” Bonham-Carter allegedly told the auction house, falsely, in an email. “I am in the process of collating documentation showing ownership of the underlying assets (as well as documentation in connection with my authorization to communicate with [the Auction House] with respect to this account).”

Bonham-Carter faces a three-count indictment accusing him of conspiring to evade U.S. sanctions in violation the International Emergency Economic Powers Act (IEEPA), one count of violating IEEPA and one count wire fraud. Each carries a maximum 20-year sentence.