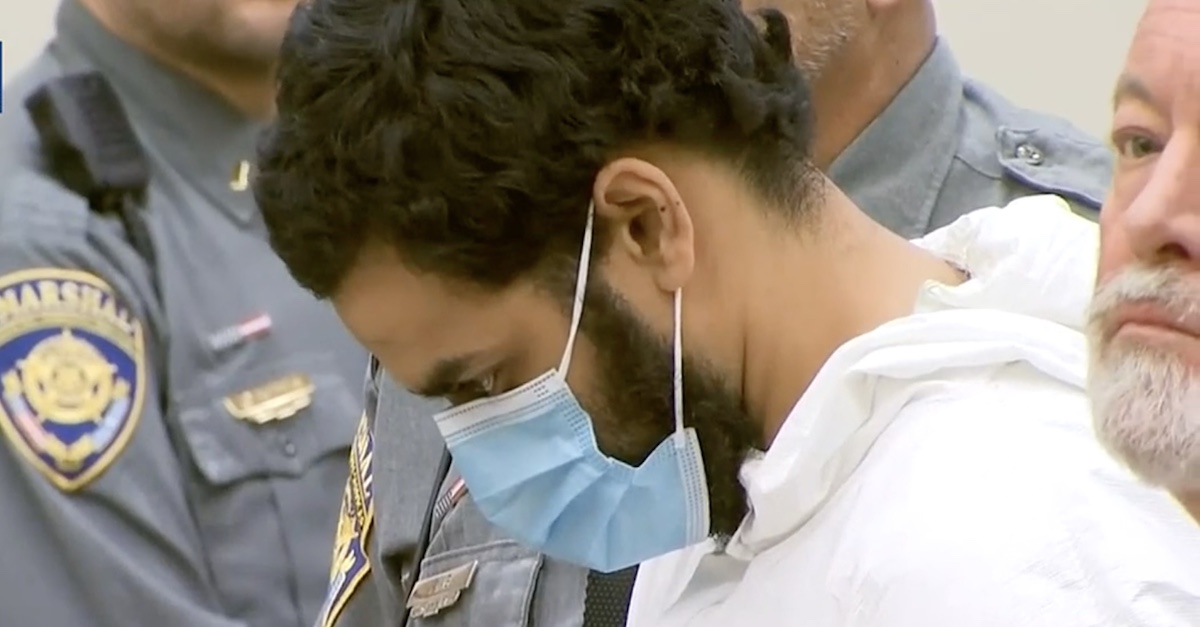 Grisly new details have been released in the case of a 31-year-old father in Connecticut accused of strangling, stabbing, and dismembering his own 11-month-old daughter.

The gruesome details emerged after authorities were able to apprehend Christopher Francisquini on Friday following a two-week manhunt for the suspected murderer. According to a copy of the 36-page arrest warrant obtained by Hartford Fox affiliate WTIC-TV, officers with the Naugatuck Police Department responded to a call at approximately 11:30 a.m. on Nov. 18 about a deceased child at a home located in 100 block of Millville Avenue where Francisquini lived with several family members, including Camilla Francisquini, his biological daughter, and Camilla’s mother.

Inside the home, officers discovered a “small child deceased with numerous stab and knife related wounds as well as part(s) of the child’s body had been separated from the main torso area,” the arrest warrant reportedly reads. Medics on the scene pronounced Camilla dead at approximately 11:46 a.m., per WTIC.

A total of 30 items were reportedly collected from the house, including a pair of sneakers belonging to Francisquini, a section of carpet, a t-shirt, and a child’s sock, all of which were covered in blood.

Camilla’s mother, identified in the warrant as Kristyl, reportedly told police that she, Francisquini, and Camilla lived in the basement of the home. When she came home from work the morning of Nov. 18, Kristyl reportedly said that Francisquini wouldn’t let her in the basement to change her clothes before going shopping in Waterbury.

As they drove to Waterbury, Francisquini was reportedly texting an unknown party about a mental health treatment facility. Kristyl reportedly said that she noticed Francisquini was sweating profusely, but said he did not appear to have any blood on his clothing.

The couple pulled in and parked at a PetSmart location and Francisquini reportedly broke both his and Kristyl’s phones. Kristyl apparently went into the store and called a family member for a ride. When she went back outside, Francisquini and the car, which belonged to Francisquini’s father, were reportedly gone.

After leaving the PetSmart, Francisquini reportedly went to an apartment in Waterbury. The person he was looking for was not there, but several other individuals who he knew but hadn’t seen in years reportedly let him in. Those individuals reportedly told police that Francisquini appeared to be excessively sweaty and tried to sell them his father’s car. One of the residents reportedly said Francisquini used his phone to create several social media accounts before borrowing a white sweatshirt and leaving.

When Francisquini’s father’s car was found abandoned along I-91 in New Haven, investigators reportedly recovered 13 pieces of evidence from inside, including a knife that is believed to be the murder weapon. Traces of blood were also found on the driver’s side of the vehicle.

Investigators currently believe that Francisquini killed Camilla prior to going to PetSmart with Kristyl, at which point he was already putting together a plan to flee.

Kristyl reportedly told police that Francisquini is bipolar and likely not taking medication, adding that the two argued “constantly.” She said he was “always hearing things,” including voices that “told him to kill his father.”

Both Kristyl and Francisquini’s father reportedly told police that he was a good and loving father with no history of abusing Camilla.

Another relative reportedly informed police that she’d spoken to Francisquini recently and he’d mentioned that his mental health was not well and he was hearing voices. He reportedly said he had urges to lash out violently, but promised he would not ever act on the impulses.

Francisquini appeared in Waterbury Superior Court on Monday for a bond hearing where he was upbraided by the presiding judge, according to a report from Hartford CBS affiliate WFSB. The judge highlighted that Francisquini was out on bond for previous felony charges at the time of the alleged murder.

“This is truly a horrific crime of unfathomable nature, he has several cases pending, most are felonies, several in other courts, several failures to appear as well. He posted $350,000 and was out when this new horrific crime occurred,” Judge Joseph Schwartz reportedly said before addressing Francisquini directly.

“You present a uniquely significant flight risk and that’s compounded by the particularly new crime, in additional to the other crimes that your charged and the length you went to avoid apprehension and detention, not only in the news case, but the other cases you failed to come to court on in Bridgeport and Milford, with failures to appear, I believe a bond of substantial nature is warrant to protect the public so like nothing like this can happen during the duration of this case.”

Judge Schwartz ultimately set Francisquini’s bond at $5 million. He is currently still in detention and scheduled to appear in court again on Dec. 21.