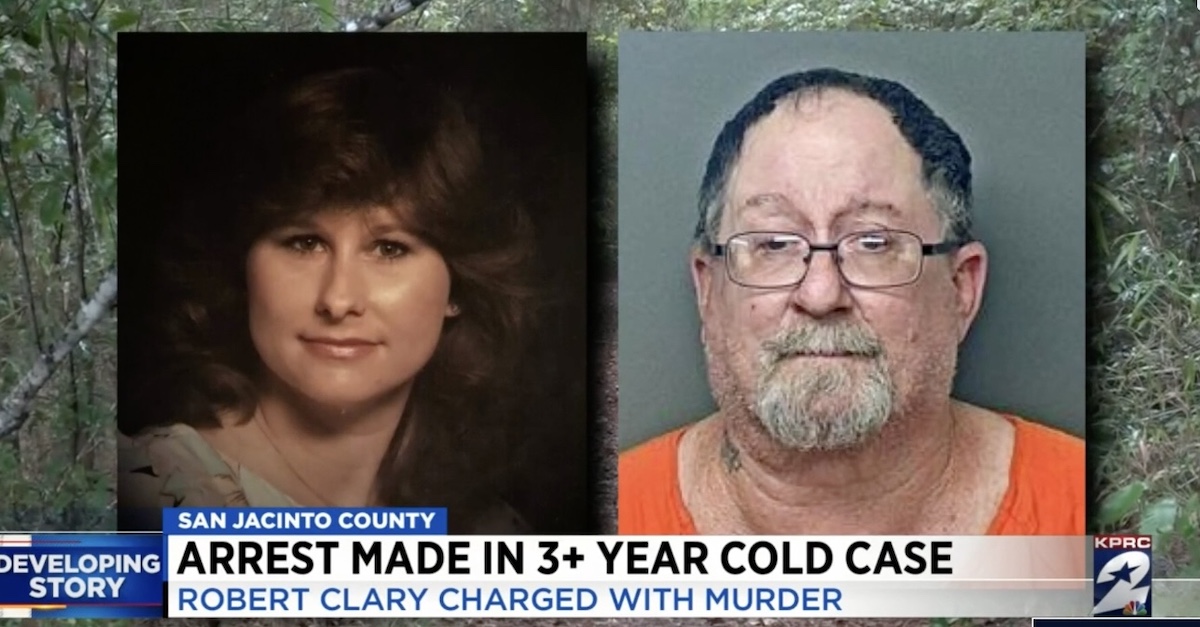 A 65-year-old man in Texas was arrested this week for allegedly killing his 59-year-old neighbor in 2019 and dumping her body in a heavily wooded area behind her home. Robert Dale Clary was taken into custody on Monday and charged with the murder of Rhonda Richardson, records reviewed by Law&Crime show.

Richardson’s body was discovered in May 2019 just off of a trail in a deeply wooded area of the Sam Houston National Forest in San Jacinto County, close to her residence, according to a report from KPRC-TV.

San Jacinto County Sheriff’s Office Sgt. Gary Sharpen said that deputies were dispatched to the area after receiving a 911 call on the afternoon of May 22, 2019 regarding a deceased adult female in the park. Upon arriving at the scene at approximately 4 p.m., Sharpen said, deputies discovered Richardson’s body along with a set of ATV tire track impressions.

According to Sharpen, it was “strange” for Richardson to be in the woods because she was afraid of the woods, particularly snakes and other animals.

A day prior to the discovery of Richardson’s body, Sharpen said that a few of the victim’s dogs had run off into the national forest. Richardson then went around asking some of her neighbors to help her look for the dogs and Clary allegedly volunteered. Several witnesses allegedly told investigators that Clary was the last person seen with Richardson.

Clary was also the person who found Richardson’s body, according to Sharpen. Instead of calling 911 to report finding his neighbor’s body, however, Clary allegedly went and spoke with several family members about the discovery.

“He never even called 911. He didn’t stop and call the authorities, he didn’t do anything,” Sharpen said. “I mean, just that alone was really odd and bizarre.”

KPRC reported that in addition to not calling the police, Clary’s behavior also included him returning to area where he found Richardson’s body and taking several photographs and bringing his nephew to the body and telling him to call 911.

Authorities had reportedly eyed Clary for some time in the case but lacked sufficient evidence for an arrest. But Sharpen said that in the years since Richardson’s murder, investigators were able to obtain new information. Cell phone technology placed Clary and Richardson both “on the trail” where she was found when Richardson’s phone showed she stopped moving, Sharpen added.

“We happened across a witness in this case that we knew was out there, but we had never been able to identify or locate. [We] happened across this witness and it really was just the last piece of the puzzle we needed to get a warrant,” Criminal District Attorney for San Jacinto County Todd Dillon told the station, calling the development “a good bit of luck.”

Richardson was reportedly a corrections officer with the Polunsky Unit of the Texas Department of Criminal Justice at the time of her death.

Clary had reportedly been charged with one count of indecency with a child in 2007 and served time behind bars after being convicted on three separate DWI charges. He is currently being held in the San Jacinto County Jail on $750,000 bond.