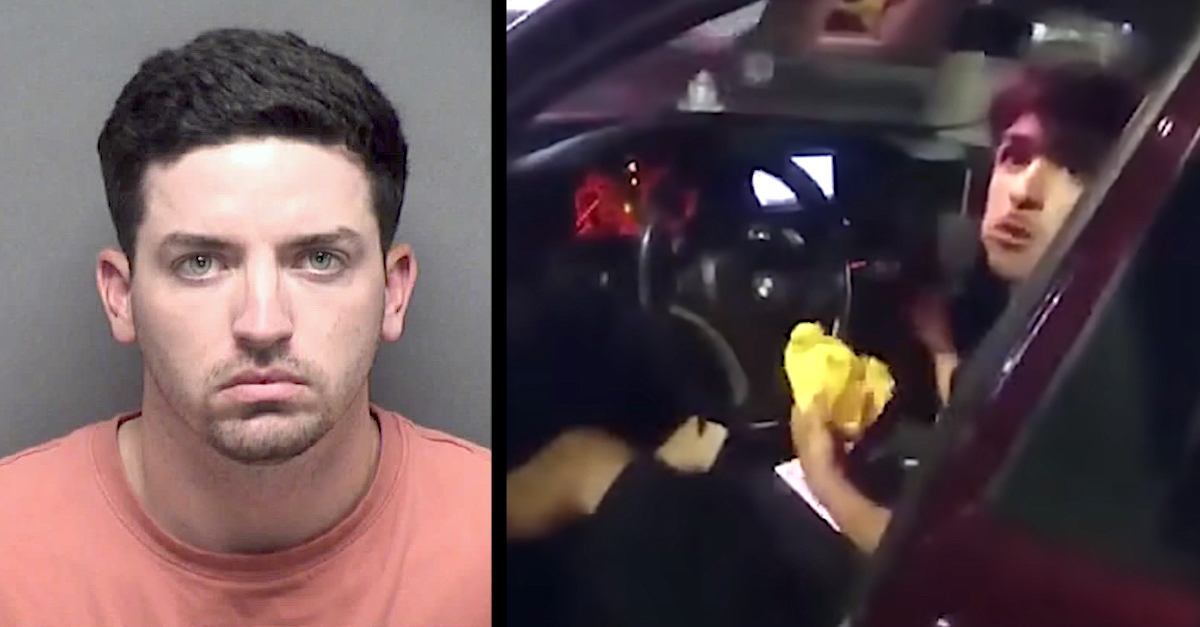 A former Texas cop is now accused of attempted murder for shooting and seriously injuring a teenager who was eating a McDonald’s hamburger in his car.

James Brennand, 25, a San Antonio police officer at the time, opened fire on Erik Cantu, 17, as the teenager sat in his car in a parking lot eating a burger on Oct. 2. As Law&Crime previously reported, body camera video shows Brennand approaching the car in which Cantu was sitting, opening the door, and ordering Cantu to “get out of the car” without any additional explanation. Cantu appears to have tried to back his car up, apparently touching or striking Brennand with the car door in the process. Brennand pulled his gun and, pointing it at Cantu, fired his weapon; he continued to shoot as Cantu tried to drive away.

According to the Bexar County District Attorney’s office, the two assault charges are for the shooting of Cantu and for “shooting at or in the direction of Emily Proulx.” Proulx was not additionally identified in the press release, but local ABC affiliate KSAT had previously reported that a “17-year-old female passenger” was inside the vehicle as Brennand unloaded his weapon.

The attempted murder charge, according to the DA, is for “attempting to cause the death of Erik Cantu.”

Cantu was hospitalized for weeks with injuries to his stomach, diaphragm, lungs, liver, bicep, and forearm, according to KSAT. He was reportedly on life support until Nov. 4. His family announced shortly before Thanksgiving that he has been released from the hospital, but he “still has a long road to recovery ahead of him,” according to the KSAT report.

“No one should have to sit by their child in a hospital and worry about whether they will make it through the night, or the next day, or the week,” DA Joe Gonzales in a press release. “My heart breaks knowing that the Cantu family went through that. The harm that results from acts like those James Brennand committed against young Mr. Cantu ripples throughout the community. We know that most officers in this city care deeply about this community, but we cannot have a safe city if the community does not have trust in the criminal justice system.”

Gonzalez said that he hopes that “by vigorously investigating and prosecuting this case, we can help to increase faith in this system, even if we can never repair and stem all the pain and suffering experienced by the Cantu family.”

The assault charges carry a potential sentence of five years to life in prison, while the attempted murder charge has a 2- to 20-year range.

Brennand was reportedly dispatched to the McDonald’s because of a call for a disturbance. Cantu wasn’t involved in that incident. Rather, the body camera video shows Brennand telling dispatchers that he believed Cantu’s vehicle was involved in a separate incident from “the other day.”

Brennand said he thought the car was stolen, according to the Associated Press, although it’s unclear whether that was actually the case.

Bexar County records show that Brennand was released after his arrest on $100,000 bond.