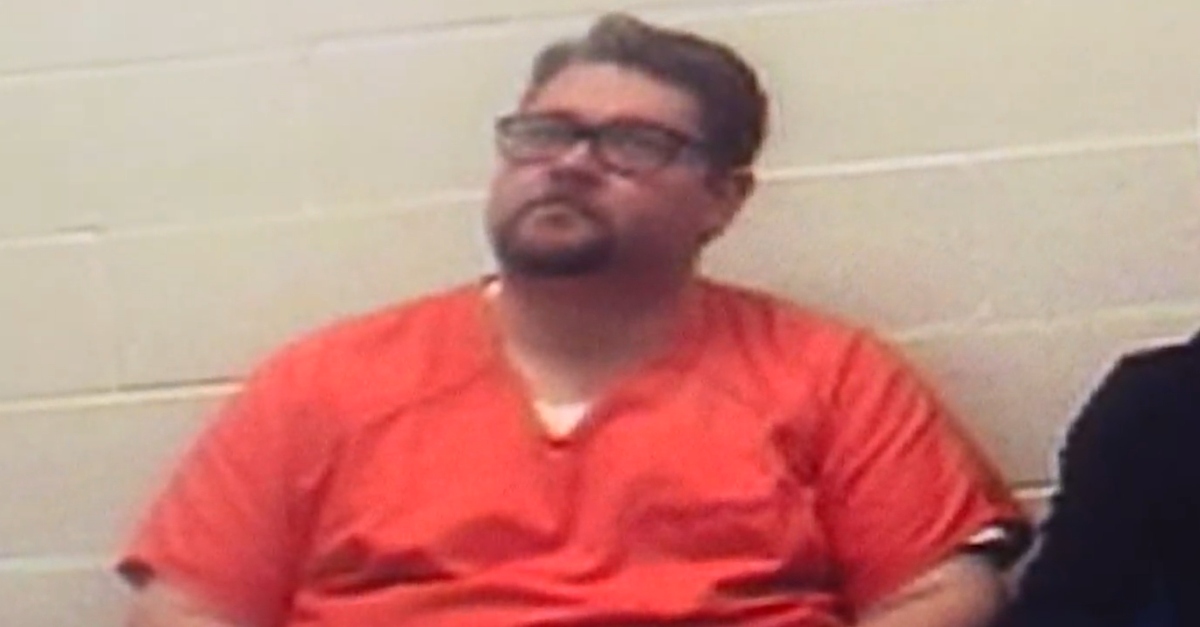 A Catholic priest betrayed the trust of young boys and desecrated the most intimate of the faith’s sacraments, say federal prosecutors. Now authorities want Robert D. McWilliams, 41, behind bars for life. At the very least, he should spend at least 40 years in prison, government prosecutors wrote in a sentencing memorandum dated Tuesday.

From the documents [emphasis theirs]:

McWilliams’ criminal conduct is multi-faceted and unprecedented. He is a consumer of child pornography, and an extortionist who violated the sacrament of confession to obtain information he later used, under aliases, to seek the production of sexually explicit material from boys he was “counseling,” and a juvenile sex trafficker. McWilliams targeted a vulnerable population that is also our most valuable resource: our children. His conduct is beyond serious and demands an appropriately lengthy sentence.

McWilliams, who was a priest at St. Joseph Catholic Church in the city of Strongsville, Ohio, and previously served as a seminarian at St. Helen’s Catholic Church in Newbury Township, pleaded guilty to sex trafficking, child pornography, and sexual exploitation charges in July. From 2017 into 2019, he solicited illicit images of minors online, and sexually abused victims in exchange for alcohol and other things, prosecutors said. He posted online under fake identifies, including that of a teenage girl, in order to contact his targets., prosecutors said.

From the Department of Justice when McWilliams pleaded guilty:

McWilliams knew some of the victims through his time in the seminary with the Catholic Diocese of Cleveland at a parish where the children and their families were affiliated.

Posing as a female, McWilliams enticed three minor victims to send sexually explicit photographs and videos, sometimes threatening to expose embarrassing information McWilliams already knew about the victims if they did not send such images. When some victims refused to send additional images, McWilliams followed through on his threats and sent sexually explicit photographs to the victims’ mothers.

McWilliams used technology to disguise his phone number, created secret email accounts, and used cloud storage to grow and organize his collection of child pornography. Yet, it was the non-technical aspects of his crimes that make him so much more dangerous. He was cunning, calculating and extremely cruel. Only a sociopath could accept the hospitality of a family only to disappear into another room to transmit images of a victim to his mother so he could witness the pain inflicted upon his hosts. Yet, this was just the tip of the iceberg.

In their sentencing memo, the defense acknowledges that McWilliams will get a long punishment because the first 180 months (15 years) are mandatory but asserted he was a candidate for successful sex offender treatment, and said that supervised release could compliment the prison term.

In the instant case, the mandatory fifteen year minimum prison sentence attendant to the most serious offenses in the indictment (Counts 3-5) assures that the sentence imposed by this Court will be sufficiently severe to reflect the seriousness of the offenses and deter others from committing them in the future. Moreover, a lengthy sentence, combined with the ample opportunity for sex offender treatment while incarcerated for this extended period, will adequately protect the public and provide for rehabilitation. The Bureau of Prisons has established numerous programs designed with the goal of rehabilitation while a defendant serves his or her punishment of incarceration.

Significantly, this Court is not merely depending upon the prison system to work. By imposing a substantial period of supervised release as part of its sentence, this Court will have direct supervision over Robert McWilliams upon his release. Conditions of supervised release can include a prohibition from using computers, frequent inspections of his residence, continued therapy and regular reporting. This not only ensures public safety, it satisfies the public’s need to feel protected. The supervisory branch of the United States Office of Probation is very good at their job and have advanced technological tools at their disposal to provide close supervision and protection of the public.

Sentencing is set for this Tuesday.