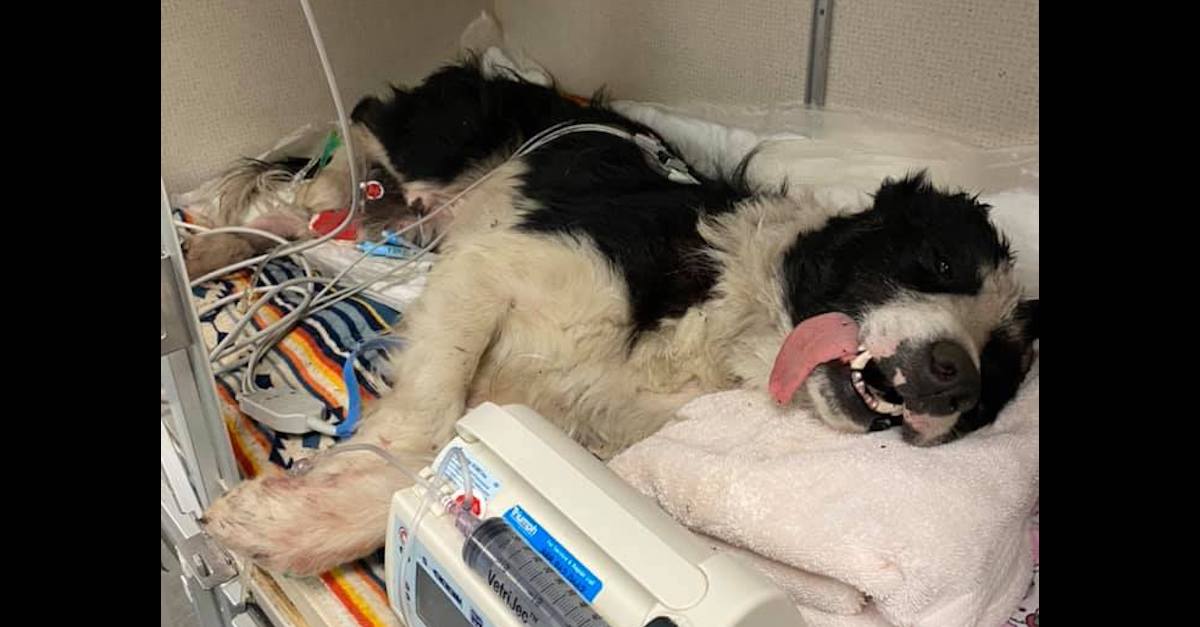 Authorities in Upstate New York are pleading for help in locating the perpetrator or perpetrators responsible for shooting a dog in the skull and leaving it to die in a ditch. The dog was so severely injured and malnourished that it was euthanized, according to the Albany County Sheriff Craig Apple.

“This poor fella was found moribund in a ditch on Peasley [Road] in Berne,” said the sheriff on Facebook and on Twitter. “He was shot 2x and dumped. He was euthanized late yesterday due to the emaciated state he was in when found. Anyone with info please contact 518-765-2351. Please help us find who did this.”

This poor fella was found moribund in a ditch on Peasley Rd in Berne. He was shot 2x and dumped. He was euthanized late yesterday due to the emaciated state he was in when found. Anyone with info please contact 518-765-2351. pic.twitter.com/w9Nj6g9Ivl

Attempts to treat the dog at a local animal hospital appear to have been in vain.

A sheriff’s department press release shared by area pet aficionado and WTEN-TV meteorologist Steve Caporizzo said sheriff’s deputies were called to the scene to help the animal. It is unclear who placed the call.

“Upon arrival, Deputies encountered a black and white dog laying on the side of the road,” the brief statement says. “Deputies placed the injured canine into the patrol car and transported the canine to the emergency animal hospital for treatment. Upon arriving at the hospital, Deputies learned the canine received a gunshot wound to his skull.”

It is unclear if the second reported shot was to the dog’s skull or to another area of its body.

The sheriff’s department says it is also seeking information about who may have owned the dog.

A litany of New York laws may apply to the situation.

Section 353 of New York’s Agriculture and Markets Law makes it illegal to torture an animal:

A person who . . . tortures or cruelly beats or unjustifiably injures, maims, mutilates or kills any animal, whether wild or tame, and whether belonging to himself or to another, or deprives any animal of necessary sustenance, food or drink, or neglects or refuses to furnish it such sustenance or drink . . . is guilty of a class A misdemeanor.

The punishment for a class A misdemeanor is up to one year in jail (364 days).

Section 353-a of the Agriculture and Markets Law makes it a felony to commit aggravated cruelty to a “companion animal,” which is elsewhere defined as including a “any dog or cat”:

That crime is punishable by up to two years in prison.

Additionally, Section 355 of the Agriculture and Markets law makes it illegal to abandon an animal:

A person being the owner or possessor, or having charge or custody of an animal, who abandons such animal, or leaves it to die in a street, road or public place, or who allows such animal, if it become disabled, to lie in a public street, road or public place more than three hours after he receives notice that it is left disabled, is guilty of a misdemeanor punishable by imprisonment for not more than one year, or by a fine of not more than one thousand dollars, or by both.

Note that several of the laws above allow the defense of justification. A 1974 New York case found the shooting death of a dog in the Town of Onondaga, near Syracuse, legally justified. In that case, “a large dog about 100-125 pounds in weight and three feet high” came running at full speed with no apparent provocation. It attacked a neighbor’s smaller dog while a group of children “were removed from the area with a good deal of confusion and screaming.” Blood was spilt. The owner of the smaller dog shot and killed the larger dog. The defendant who pulled the trigger had an infant daughter who “was seriously bitten and scarred by a dog three years prior to the incident” and, thus, was justifiably nervous about the damage the larger dog might inflict.

The facts surrounding the situation involving the black and white dog which died in Albany County remain unclear.

In 2009, news reports indicate that two other dogs in the same town were shot and killed for allegedly terrorizing a man’s chickens.