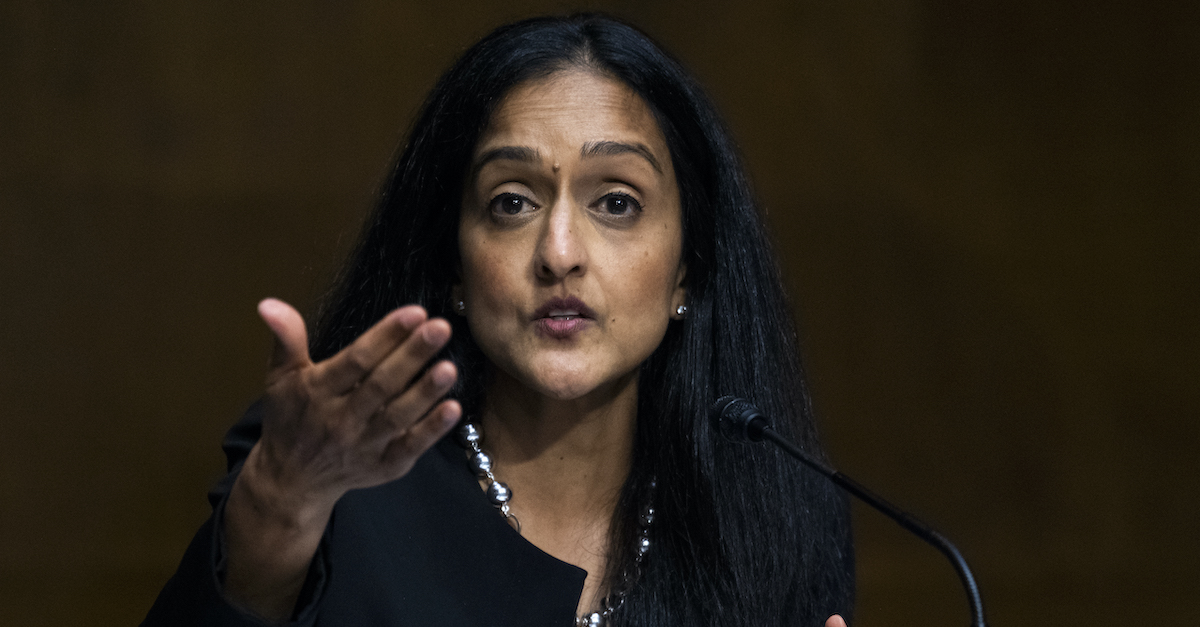 Vanita Gupta testifies during a Judiciary Committee hearing on June 16, 2020, weeks after George Floyd’s murder by Minneapolis police officer Derek Chauvin on May 25.

Gupta never attained Senate confirmation under Obama, serving in her post in an “acting” capacity throughout her tenure. She barely received the Senate’s seal of approval on Wednesday, after Republicans—many of whom were silent about tweets by former President Donald Trump—claimed to be outraged by her Twitter account.

The now-Associate Attorney General once panned the 2020 GOP convention by writing: “Don’t know if I can take three more nights of racism, xenophobia, and outrageous lies,” before apologizing during her hearings for her “harsh tone.”

In her floor speech, Murkowski described bucking her party’s trend after a long conversation with the nominee.

“I asked her point blank, ‘Why do you want this? Is this worth it?’ Because this has clearly been very hard on her as a nominee,” Murkowski recalled. “And she paused and reflected a moment, and just spoke to how she feels called to serve in a very personal way that I thought was impactful.”

“I am going to give the benefit of the doubt to a woman who I believe has demonstrated throughout her professional career to be deeply, deeply committed to matters of justice,” Murkowski added.

Senator Murkowski says she will be supporting the final confirmation of Vanita Gupta pic.twitter.com/gf5NiiwTS7

“Can we really come together, put law enforcement leaders at the table with community leaders and civil rights and find common ground?” Durbin asked, before making his case that Gupta fit that bill.

“She is a dedicated professional with an extraordinary resume who wants to continue to serve this country,” Durbin said, touting her support by the National Sheriffs Association, Major County Sheriffs Association, International Association of Chiefs of Police, Major Cities Chiefs, and 53 former police chiefs and sheriffs.

“Here’s what they said about Vanita Gupta: ‘Gupta always worked with us to find common ground, even when that seemed impossible,’” the Democratic Senate Majority Whip added. “Isn’t that exactly what we want at this moment in American history as we cope with the civil rights challenges of our age? This is our chance.”

Unlike Gupta’s confirmation, Lisa Monaco had an easier road to becoming deputy attorney general, making her the second highest-ranking official at the Justice Department. Only Trump-loyalist Senators Ted Cruz and Rand Paul opposed her confirmation at the margins of the party’s right flank, in an otherwise seamless 98-2 vote. Monaco is reportedly expected to be charged with helping to oversee the still-growing number of prosecutions that resulted from the Jan. 6 siege of the U.S. Capitol.

Another contentious confirmation is on the way with Kristen Clarke, a longtime civil rights champion who quoted late Supreme Court Justice Thurgood Marshall in her opening remarks to the Judiciary Committee. Republicans have raised howls about her Newsweek editorial about the movement to defund the police, which she says has been misinterpreted. Clarke would be the first Black woman to hold that post if confirmed.