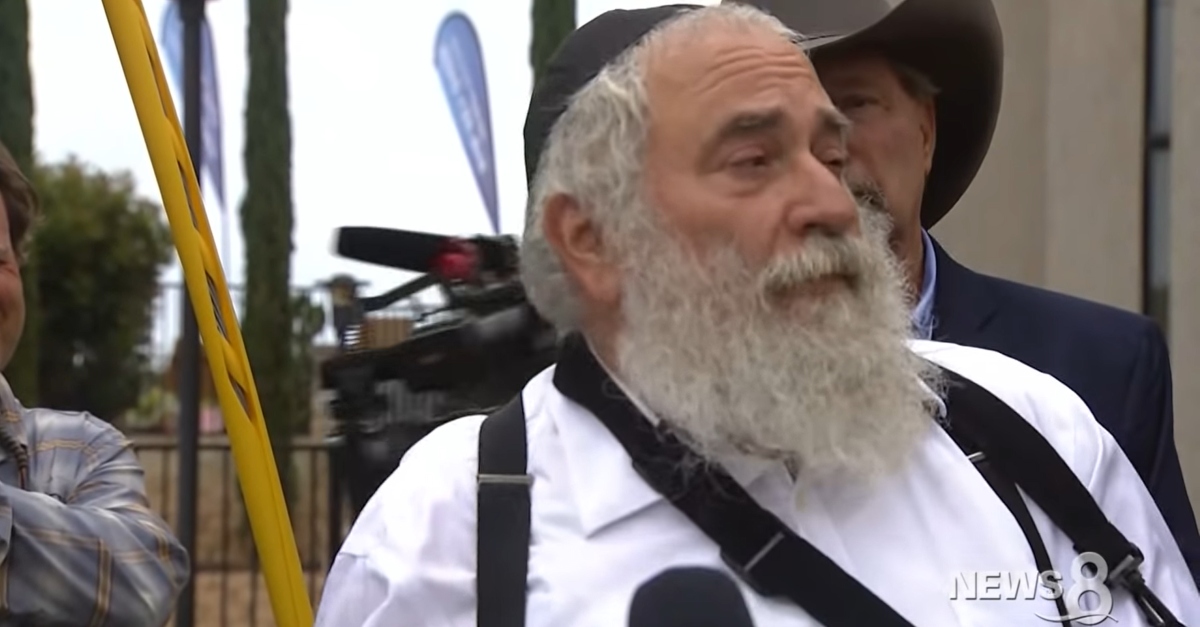 Rabbi Yisroel Goldstein speaks after the Chabad shooting in 2019.

A rabbi who survived a deadly anti-Semitic shooting was sentenced to 14 months in prison on Monday for orchestrating an elaborate fraud scheme. Yisroel Goldstein, 60, collected fake donations via the Chabad of Poway, according to the United States Department of Justice. He then refunded the cash and facilitated tax deductions for his so-called donors, prosecutors said. The authorities say Goldstein cheated the Internal Revenue Service as well as three Fortune 500 companies.

“According to his plea agreement, while Rabbi Goldstein was director of the Poway synagogue, he received at least $6.2 million in phony contributions to the Chabad and affiliated charities and secretly refunded up to 90 percent of the donations to the ‘donors,'” the DOJ said.

Goldstein gave these so-called donors fake receipts, and they illegally claimed big tax deductions for these staged contributions, authorities said. He kept about 10 percent for himself, more than a half-million dollars over the course of the fraud, the DOJ said. The IRS lost more than $1.5 million, according to officials.

The Fortune 500 companies were caught up in the web by matching supposed charitable contributions from employees.

Goldstein orchestrated the scheme with at least six employees and two other people who helped recruit new so-called donors or who helped hide the actual recipient of the funds.

“In total, Rabbi Goldstein defrauded the companies out of at least $144,000, and helped the taxpayer-employees to claim nearly as much in fictitious tax-deductible charitable contributions to the IRS,” the DOJ wrote.

He also helped his brother Mendel Goldstein — who pleaded guilty in a tax evasion case in September 2020 — to hide $700,000 from the IRS by letting Mendel deposit money into Chabad bank accounts. Mendel Goldstein gave Yisroel Goldstein more than $70,000 as a cut, authorities said.

“Separate and apart from the tax evasion scheme, Rabbi Goldstein and another defendant, Alexander Avergoon, used false information and fabricated invoices and other records to pretend to be eligible for emergency funds, grants or donations, and private loans,” authorities said. “These frauds on the Federal Emergency Management Agency (FEMA), the California Governor’s Office of Emergency Services (Cal OES), and private foundations resulted in losses to these programs of at least $860,000.”

Prosecutors argued that Goldstein should be treated with leniency for cooperating against other defendants and because of what he endured during the 2019 shooting. John T. Earnest, 22, opened fire at the Chabad of Poway on April 27 of that year, killing congregant Lori Gilbert Kaye, 60. Noya Dahan, then 8, reportedly survived with shrapnel in her face and leg, while Almog Peretz, then 34, suffered shrapnel in the leg while saving several children. Earnest, who was sentenced in both state and federal courts to life in prison, published a vicious, anti-Semitic manifesto before the attack.

“My missing finger will forever scar me physically,” Goldstein said at the time, “but it’s going to remind me how vulnerable we are and also how heroic each one of us can be. We’re all created in God’s image. We’re all partners in creation. No matter what faith or religion you’re from, we all have to make this world a better place to prevent this from ever happening again.”

He pleaded guilty more than a year later in July 2020 to conspiracy to defraud the United States and commit wire fraud.

U.S. District Judge Cynthia A. Bashant gave the rabbi prison time on Monday, citing his leading role in the fraud.

“You dragged down so many congregants,” she said, according to the DOJ. “Many of those individuals thought that they were committing these offenses to benefit the Chabad or the synagogue in general, when in fact it was to benefit you. I just can’t ignore that.”

Goldstein has until noon on Feb. 23 to turn himself in, the DOJ said. His attorneys did not immediately respond to a Law&Crime request for comment.