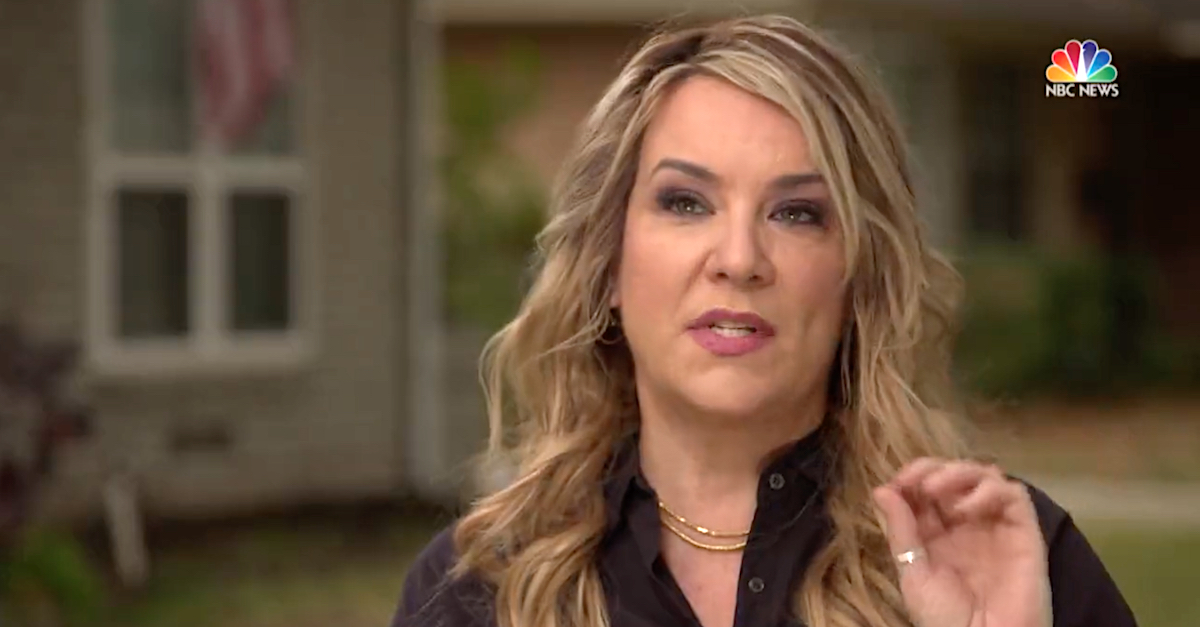 Jenna Ryan appears in a screengrab from an NBC News interview recorded shortly before she reported to jail.

The Texas real estate agent who reported to jail on Dec. 31, 2021 to serve 60 days for entering the U.S. Capitol Complex on Jan. 6 of that year bemoaned her treatment in an interview set to air Tuesday night on NBC Nightly News.

Jenna Ryan, 51, who referenced her white skin color in a viral tweet last March, complained that people are now — and apparently were — commenting about her skin color.

“Sorry, I have blonde hair, white skin, a great job, a great future, and I’m not going to jail,” Ryan wrote last year.

Ryan told NBC News that the comment about her skin color was not a suggestion that she would be treated with leniency by the courts but rather was a response to previous comments which mentioned her racial identity.

“It wasn’t the best way to handle it,” she told NBC News in an interview recorded five days before she was scheduled to report to jail. “I understand that now.”

Her half-apologetic defense of herself was peppered with accusations that others attacked her first and thus provoked the now-famous comment.

“They’re making fun of my skin color,” she told NBC. “They’re calling me an ‘insurrection Barbie.'”

“They have no idea who I am as a person, what my beliefs are, what I’ve been through, who I am,” she continued in an excerpt of the interview released by NBC. “They see me as a one-dimensional caricature. They don’t see me as a human.”

But she then brought up the Holocaust.

“And so, that is the epitome of a scapegoat. Just like they did that to the Jews in Germany,” Ryan continued. “Those were scapegoats. And I believe that people who are Caucasian are being turned into evil in front of the media.”

Ryan appeared to be referencing Kristallnacht, the destruction of Jewish businesses and homes and the mass arrests of Jewish individuals on Nov. 9 and Nov. 10, 1938, by the German government. The infamous roundup and subsequent mass exterminations via concentration camps was purported by the Nazis to be an atonement for the assassination of Ernst vom Rath, a Nazi official shot and killed by Herschel Grynszpan, 17. Grynszpan was a Jewish teen living as a refugee in Paris who lashed out after his family was kicked out of Germany and sent to Poland. The Nazis used vom Rath’s death to further crack down on the Jewish population within their reach — hence the “scapegoating” of the entire population due the acts of one young man (which were in turn spurred by the Nazis themselves).

NBC said Ryan was “reluctant to say more” when pressed about whether she was comparing her criminal case to the Holocaust.

“I’m afraid to answer your question because I will be attacked for saying that,” Ryan responded, per NBC.

In a pre-broadcast excerpt of the interview released by NBC, Ryan did not connect her own then-imminent (and currently ongoing) incarceration, which resulted from her own admitted acts on Jan. 6, with her race, religion, or any other protected class status. In other words, she was jailed for what she did, not for who she was, and she appears not to have contested that. Her analogy to the treatment of people of the Jewish faith by the Nazis appears to have been limited to how she believes whites are being treated by “the media.”

“I pled guilty for that and I have remorse for that” says Jenna Ryan about entering the Capitol last Jan 6. She pleaded guilty to a misdemeanor & is now serving 60 days in federal prison. More of my @NBCnews exclusive interview @nbcnightlynews tonight and tomorrow @todayshow pic.twitter.com/uJ4zu2tmGW

Ryan pleaded guilty in August 2021 to just one count of parading, demonstrating, or picketing in a Capitol building — a charge that carried a penalty of up to six months in jail.  She was charged with two counts in January 2021. Prosecutors upped the charges to four counts by February 2021 and to five counts in June 2021.

In a sentencing memorandum that sought a 60-day sentence, prosecutors pointed to Ryan’s extensive attempts to seek social media stardom before and after the Jan. 6 siege. They also pointed to Ryan’s actions outside the capitol for nearly an hour. The defendant allegedly encouraged others to continue the siege and promoted her business on social media feeds while the breach was happening.

Ryan’s attorney, however, said she was only inside the capitol for a brief time and sought to narrow the court’s focus at sentencing to focus only on his client’s admitted act of entering the capitol. Ryan’s attorney extolled Ryan’s virtues while seeking a sentence of only probation and a $500 restitution payment in a competing sentencing memorandum:

Ms. Ryan and a Capitol Police Officer greet each other amicably. There is no evidence of any Officer telling Ms. Ryan not to enter the Capitol or directing her to leave. And, as the Government concedes, she remained inside the Capitol only about two minutes. Ms. Ryan’s trespass into this public building was for only a very short time and she was never more than 10 feet from the door. Ms. Ryan did not approach the House or Senate chambers, or even get far enough inside to view the magnificent statues and other artwork in the various wings and halls of the building. She merely walked inside the door, stood peacefully, chanted unoffensively along with the crowd, then exited as she had entered. Her actions were part of the protest of the day, and she has admitted that she knew it was wrong to parade or demonstrate inside the Capitol that day. It is this act, alone, that she has been convicted of and for which she should be sentenced.

U.S. District Judge Christopher R. Cooper told Ryan she had “become one of the faces of Jan. 6” and deserved at least some time behind bars.

“People will want to know how she was sentenced,” Cooper also said, “and the sentence should tell them we take it seriously.”

Ryan responded to her critics in the NBC interview by saying that “[e]veryone has done something wrong in their life.”

“I don’t feel like a horrible person,” she continued later. “I feel like a proud American who made a mistake but did what I thought was right at the moment.”