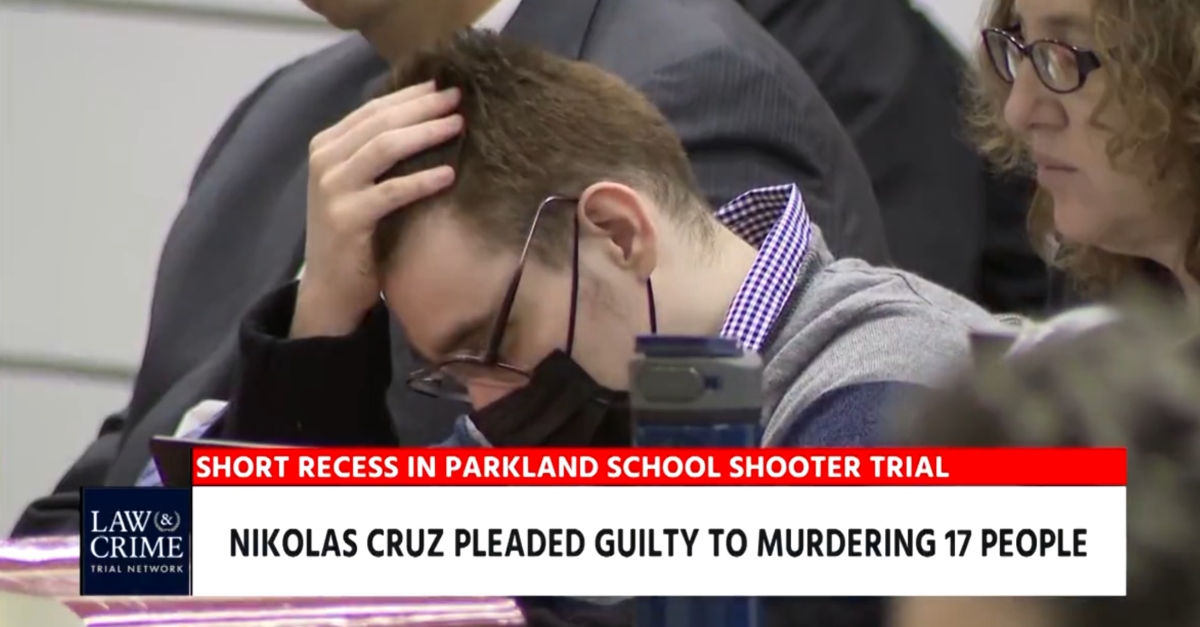 Recounting the step-by-step execution of the crime, a Florida prosecutor told jurors how mass shooter Nikolas Cruz, 23, murdered 17 people and injured 17 others at Marjory Stoneman  Douglas High School on Feb. 14, 2018.

On the first day of the penalty phase of Florida’s case against Cruz, prosecutor Michael Satz emphasized the premeditated nature of the attack to jurors in Broward County, Florida.

Cruz pleaded guilty last year to 17 counts of first-degree murder, and first-degree attempted murder. The state is trying to put him to death. Cruz’s defense lawyers reserved their opening statement for when it was time to present their case.

Satz described the 23-year-old in four words: “Cold. Calculated. Manipulative. Deadly.” He said Cruz had been planning the attack since before his mother died and he moved in with a friend’s family.

Satz: A student, Christopher McKenna, got a hall pass from his teacher. Walks into the stairwell as NC is preparing his M&P rifle and NC says “you better get out of here, something bad is about to happen.” @LawCrimeNetwork

Cruz took an Uber to the campus, where he had attended school until the previous February, Satz said. He took out an AR-15 rifle. As he was preparing the firearm, he had a chance encounter with student Christopher McKenna in the hallway.

“You better get out of here,” he said.  “Something bad is about to happen.”

In laying out the aggravating factors, Satz told jurors they could consider Cruz’s prior convictions of a capital felony or a felony involving the use or threat of use of violence. That includes his conviction for attacking a sheriff’s deputy in jail on Nov. 13, 2018. But jurors can also consider the first murder as an aggravator even if it was contemporaneous with the other shootings.

The remaining six aggravators are: knowingly creating a great risk of death to many people; the murders were especially heinous, atrocious, and cruel; murders were cold, calculated, and premeditated; murders were done to disrupt or hinder a government function — in this case, a school; as a teacher, athletic director, and coach respectively, Beigel, Hixon, and Feis were appointed public officials in the performance in their duties; and the murders were committed in the course of a burglary. Anticipating confusion from the jurors, Satz said that this crime was a burglary because Cruz entered the school without permission to commit an offense.

These aggravators outweighed whatever mitigators jurors might hear, such as details about his childhood or whatever treatment he received.

Cruz fled the scene without his rifle, Satz. He blended in with students and teachers evacuating from the school. The fire alarm had gone off from a false positive. Instead of smoke, it sensed dust shaken from the ceiling tiles by the percussion of the gunshots.

After leaving campus, Cruz went to a Walmart, ordered from a Subway restaurant inside of the store, finished his order, and walked to a McDonald’s. At the McDonald’s, he encountered Stoneman Douglas student John Wolford — the brother of injured survivor Madeline Wolford. Wolford at the time did not know what was going on, Satz. Cruz demanded a ride from him. Wolford refused, saying his mother was going to pick him up.

Cruz walked out of the McDonald’s. Police apprehended and arrested him about 40 minutes later.