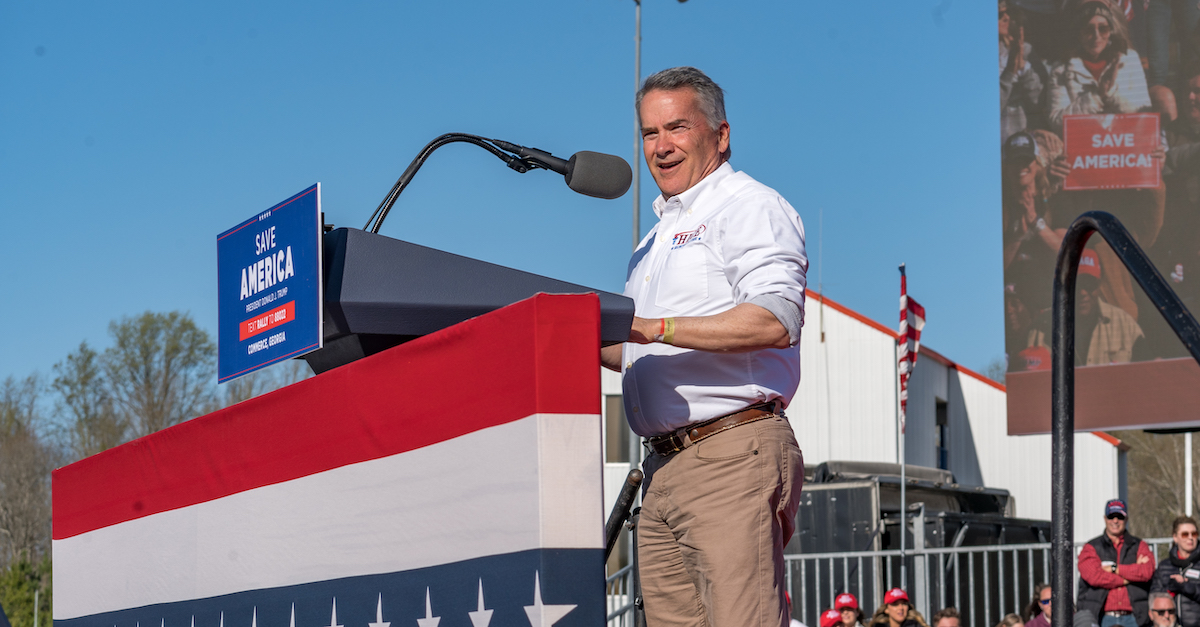 Rep. Jody Hice (R-Ga.) speaks to supporters of former U.S. President Donald Trump at a rally at the Banks County Dragway on March 26, 2022 in Commerce, Georgia.

Another Donald Trump-supporting member of Congress disclosed on Monday that the Georgia prosecutor investigating attempts to overturn the 2020 presidential election has issued a subpoena against him — and announced plans to fight the request the day before his scheduled testimony.

Rep. Jody Hice (R-Ga.) revealed the development in a notice filed in Fulton County Superior Court, where a special grand jury has been empaneled since January to probe “the facts and circumstances relating directly or indirectly to the possible attempts to disrupt the lawful administration of the 2020 elections in the State of Georgia.”

One day before his scheduled appearance before the special grand jury on Tuesday, Hice signaled plans to remove the fight to federal court.

“Since Congressman Hice is a member of the United States House of Representatives and is being asked to testify pursuant to a state-issued subpoena, the federal officer removal statute should apply, and this action should therefore be removed to the United States District Court for the Northern District of Georgia,” the congressman’s attorney Loree Anne Paradise wrote in a 5-page notice.

Paradise did not immediately respond to Law&Crime’s email requesting comment.

A former radio show host, Hice assumed office in 2015, and he tried unsuccessfully to replace Georgia Secretary of State Brad Raffensperger (R), who resisted Trump’s efforts to reverse Joe Biden’s victory in the Peach State. The Fulton County DA’s investigation into election subversion in Georgia was spurred in part by Trump’s phone call pressuring Raffensperger to “find 11,780 votes” in his favor. Hice lost his primary race against Raffensperger, even after Trump endorsed the congressman.

The district attorney’s investigation has heated up in recent weeks. Willis papered several Trump loyalists with subpoenas, including Sen. Lindsey Graham (R-S.C.), Rudy Giuliani, and campaign attorneys like Kenneth Chesebro, John Eastman, Cleta Mitchell, and Jenna Ellis. Shortly after, her office sent out “target” letters informing state Republicans that they could be indicted.

One of the recipients of the target letters, state Sen. Burt Jones (R), filed a motion on Friday seeking to disqualify Willis, claiming that the Democratic DA isn’t “disinterested.” According to Yahoo News, the other target letter recipients include state Sen. Brandon Beach (R) and David Shafer, the chairman of the Georgia Republican Party.

Special grand juries cannot return indictments, but they can produce information that may fuel criminal prosecutions.

As prosecution appears increasingly likely, resistance to the Fulton DA’s investigation has stiffened among Trump allies. Graham previously filed a motion to quash his subpoena in the District of South Carolina, arguing that he is “immune” from testifying as a U.S. senator. Fulton Superior Court Judge Robert McBurney ordered Graham’s in-person presence in a Georgia courtroom for the special grand jury from Aug. 2 to Aug. 30, a length of time that the senator claims will interfere with the duties of his office.

“That appearance would inhibit—or even potentially prohibit altogether—Senator Graham from exercising his constitutionally prescribed duties in the Senate on behalf of the People of South Carolina,” Graham’s memo states. “During this time, Senator Graham is in South Carolina and returning to Washington, D.C. for legislative business until the next state work period begins.”

The Senate will be in session during the start of Graham’s scheduled special grand jury testimony.