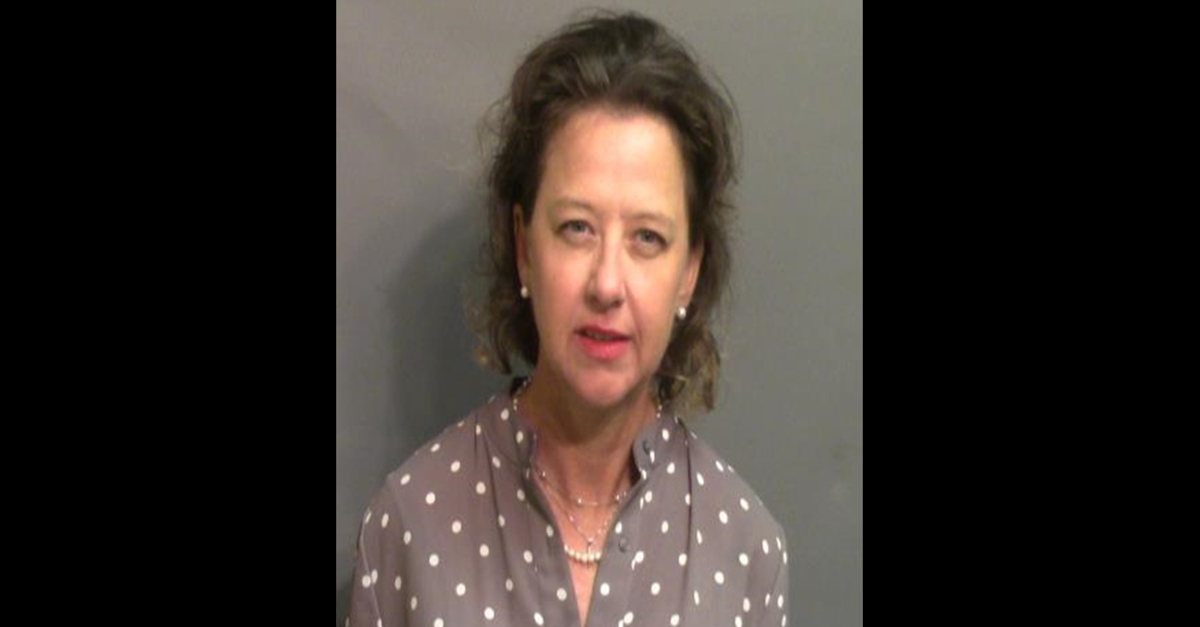 The former district attorney who allegedly protected suspects charged with murdering Ahmaud Arbery has turned herself in to authorities and was processed at a local jail. As reported last week, former Glynn County District Attorney Jackie Johnson, 49,  now faces charges of violating her oath of office and obstructing a law enforcement officer.

A jail staffer tells Law&Crime bond was set at $10,000, but Johnson was released on her own recognizance.

Johnson is inextricably linked to defendant Gregory McMichael, who used to work for her office as an investigator. McMichael and his son Travis McMichael chased down Arbery in a fateful Feb. 23, 2020 encounter, claiming they suspected he was a burglar. William “Roddie” Bryan, Jr. recorded the incident. Though he claimed he was a witness, prosecutors say Bryan was actually participant in the chase.

Travis McMichael was the actual gunman, killing Arbery with a shotgun. The victim’s family said Arbery was just jogging when the suspects accosted him. Travis McMichael allegedly called Arbery, a Black man, the N-word. All of the defendants, including Johnson, are white. The men were only charged after footage was released in May — months after the fatal shooting.

Johnson, whose office was the first to handle the criminal investigation, is charged with violating her oath of office and obstruction. The basis of the oath of office charge is that Johnson allegedly “sought the assistance of Waycross Judicial Circuit District Attorney George E. Barnhill and, after disqualifying her office, recommended DA Barnhill to the Attorney General’s Office for appointment as the case prosecutor without disclosing that said accused had previously sought the assistance of DA Barnhill on the case.” Barnhill, who said that the McMichaels acted legally under a state citizen’s arrest law, recused himself and the case is now in the hands of Georgia Attorney General Chris Carr (R).

The basis of the obstruction charge against Johnson is that she allegedly told two Glynn County police investigators not to arrest Travis McMichael.

Gregory McMichael allegedly called Johnson for advice after the shooting.

“Jackie, this is Greg,” he said in a recording in the public case file, according to The Associated Press. “Could you call me as soon as you possibly can? My son and I have been involved in a shooting and I need some advice right away.”

His cellphone record did not show that she returned the call.

Arbery’s family have sued over his death (Johnson was one of the named defendants).

“An avid runner, Ahmaud frequently jogged around his neighborhood and surroundings areas in Brunswick, Georgia, including Satilla Shores,” said a lawsuit from Arbery’s mother Wanda Cooper. “That day three armed white men, Defendants Gregory McMichael, Travis McMicheael, and William Bryan — entrusted by local law enforcement to respond to recent trespasses in the area, and armed with a Police-Department-issued revolver and a 12-gauge shotgun — hunted Ahmaud down in their trucks. Based on a ‘gut feeling’ that Ahmaud was responsible for prior thefts in the neighborhood, these Defendants shot Ahmaud three times at close range with their shotgun and killed him. As Ahmaud lay bleeding out on the pavement, Defendant Travis McMichael stood above him and said, ‘fucking N*****.'”

Johnson’s attorney of record did not immediately respond to a Law&Crime request of comment. The former D.A., who lost a reelection campaign last November, has denied wrongdoing.

“I’m confident that when the truth finally comes out on that, people will understand our office did what it had to under the circumstances,” she told the AP at the time.

[Booking photos of the four defendants via Glynn County Detention Center; image of Arbery via the office of Cooper attorney Ben Crump]