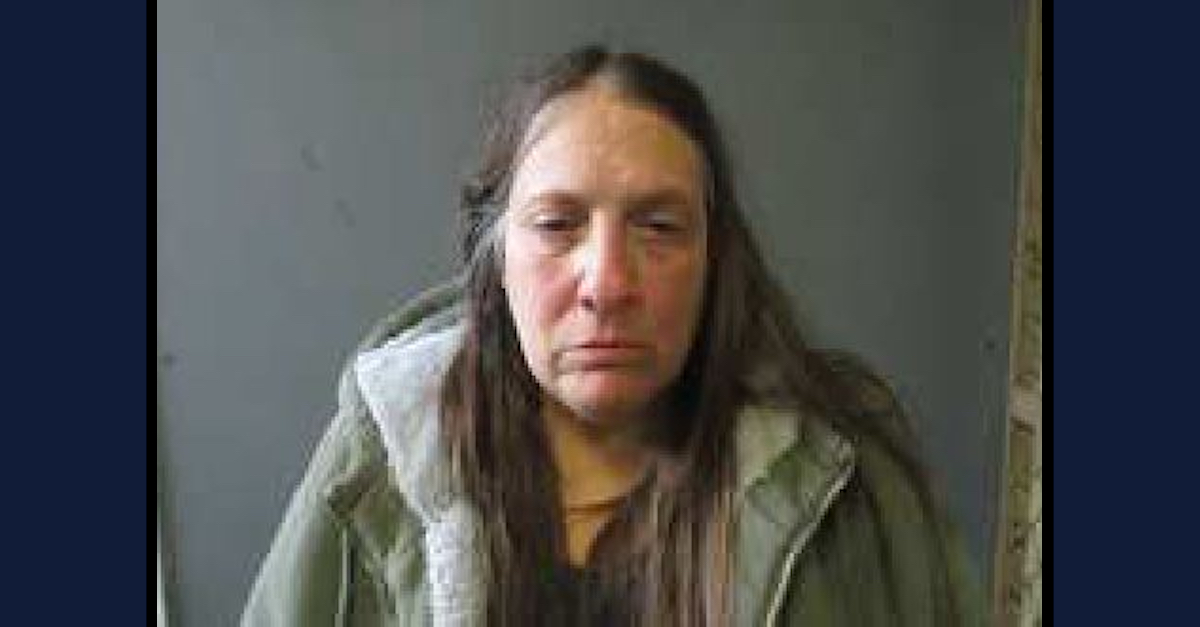 A woman who operated a licensed dog and cat rescue program has been arrested on animal cruelty charges, the Connecticut State Police announced on Saturday.

According to a press release, Joann M. Connelly, 59, of Hebron, Conn., owns and operates CT Pregnant Dog and Cat Rescue, which the state police described as a “licensed animal importer.”  During a February 2020 inspection at the defendant’s facility, authorities found “five dogs who appeared to be in good order,” but the state police said officers started fielding complaints the following February.  Those complaints resulted in attempts by law enforcement personnel to ascertain the conditions behind a “locked gate,” but the state police wrote that their attempts to gain access to the facility were “unsuccessful.”

“Despite the many anonymous complaints received by State Animal Control there was no substantive evidence to apply for a search and seizure warrant,” the state police asserted.  Meanwhile, according to court documents, Connelly provided paperwork to the authorities which indicated the dog whose alleged condition resulted in the 2021 complaint had been taken to a veterinarian and was “doing better.”

“On March 23, 2022, a Department of Children & Families investigator requested assistance during a site visit for information received that the owner had moved and a large number of animals had been left behind,” the state police wrote.

A state trooper joined a local and a state animal control officer to investigate.

“[T]he conditions in the home were found to be deplorable and unsanitary and an overwhelming odor of urine and feces could be smelled from outside of the residence,” the state police said.  “Officers observed numerous dogs in cages crammed throughout the house to include the basement.” 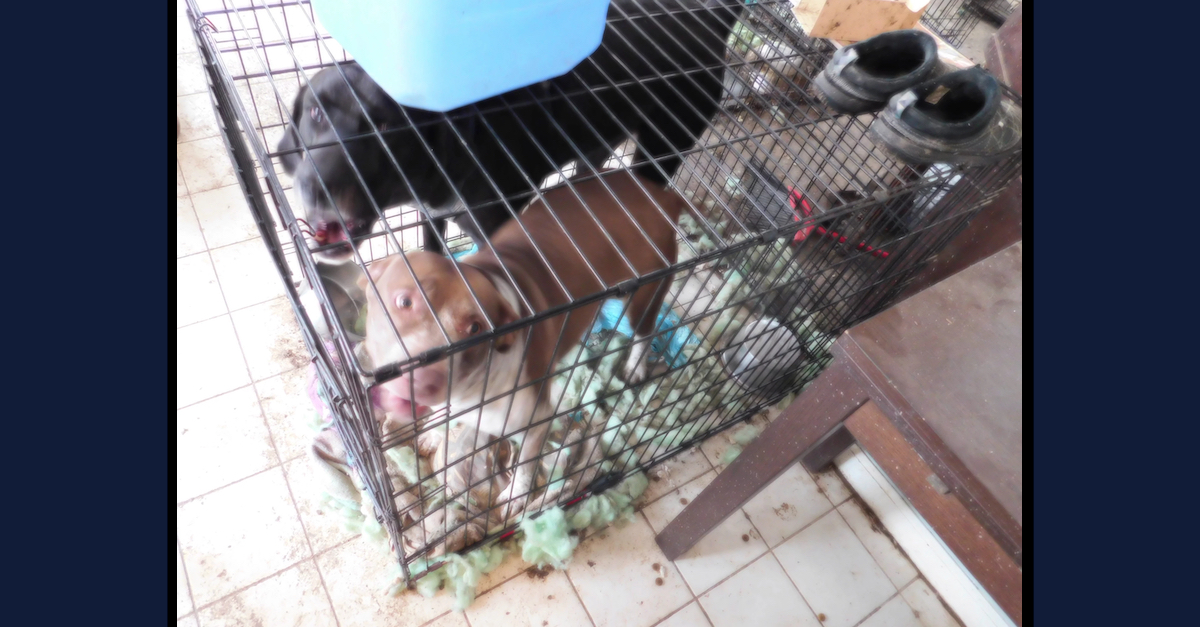 “The floors throughout the home were covered in urine and feces,” a press release continued.  “Birds and cats were also in the home and a pony, goats and geese were outside of the home in poor conditions.”

Upon entering the front interior of the home, [an officer] noticed twelve dogs in cages.  There were seventeen dogs in cages in the second room as well as five dogs in the basement.  The floors throughout the home were covered in urine and feces, newspaper clippings, dog food and dirt.  Four of the five dogs in the basement were four puppies that appeared to be about six months old with their mother.  The Basement floor was covered with sheet rock, insulation, urine and feces.  The back room in the basement had fourteen cats in cages, feces, urine, and kitty litter everywhere.  On the second floor of the home there were three loose cats in the bathroom, two cats in the bedroom, feces, urine, cat litter and animal hair apparent in each room.  Air quality is worse than poor.  There were two parakeets in a cage in one of the bedrooms which was filled with bird waste and filth.  The general appearance of the house was extremely filthy.  Outside of the home there was a pony, goats, and geese and a shared living quarters that contained approximately three feet of manure and hay.

One of the responding officers wrote that she “had difficulty breathing even while nearing an n95 respirator.” 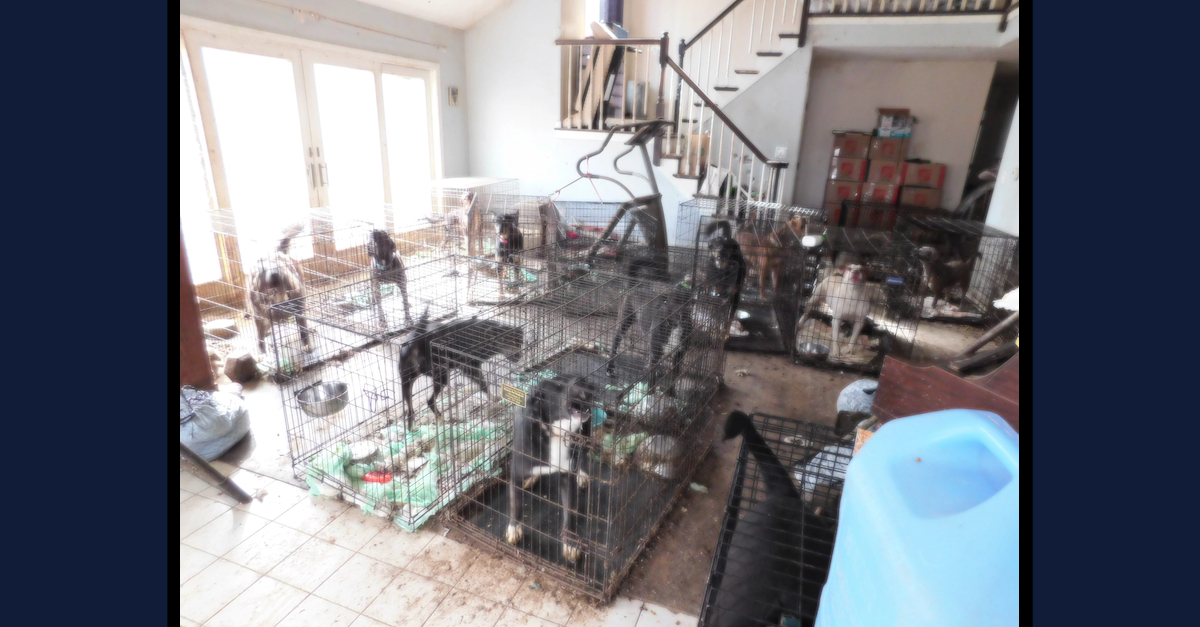 Authorities applied for and received a warrant for Connelly’s arrest on March 24, 2022, and arrested her the following day.  The defendant is charged with three counts of cruelty to animals under Conn. Gen. Stat. § 53a-247(a), which is a Class D felony in the Nutmeg State.

According to court records, each of the three charges is related to different types of animas:  dogs, cats, and birds.

The court paperwork indicates that Connelly, who lived approximately one-half hour east of Hartford, Conn., tried to take three puppies who were severely ill to a veterinary center in Rhode Island in 2021 — one which appears to have been about an hour away from her home.

The puppies, per the court documents, “appear[ed] to have distemper,” but Connelly “refused to euthanize the animals” despite a veterinarian’s recommendation that they were “suffering” and that euthanasia was “required.”

The vet allegedly said that two of the three dogs “would die” if they were allowed to leave the hospital.

Connelly, per the court records, eventually agreed to have the animals put down, but only after complaints were lodged with authorities in Connecticut.  Other puppies from the same litter were also euthanized by another veterinarian, the documents indicate.  Authorities issued “infractions” for failing to notify the state of a so-called “Adoption Event,” the paperwork notes.

A subsequent 2021 complaint alleged that Connelly “possessed an excessive number (over 25) dogs at her house” in an “unclean, unhealthy and unsafe environment” where the animals were “confined to crates” most of the time.  These complaints led to the aforementioned unsuccessful attempts by law enforcement to obtain a search and seizure warrant, the court documents indicate.

According to the state police, a judge agreed to issue a $10,000 bond after Connelly was arrested and ordered Connelly not to possess any more animals.  It is unclear whether Connelly actually posted that bond. She’s due in court on Monday, March 28, the state police said. 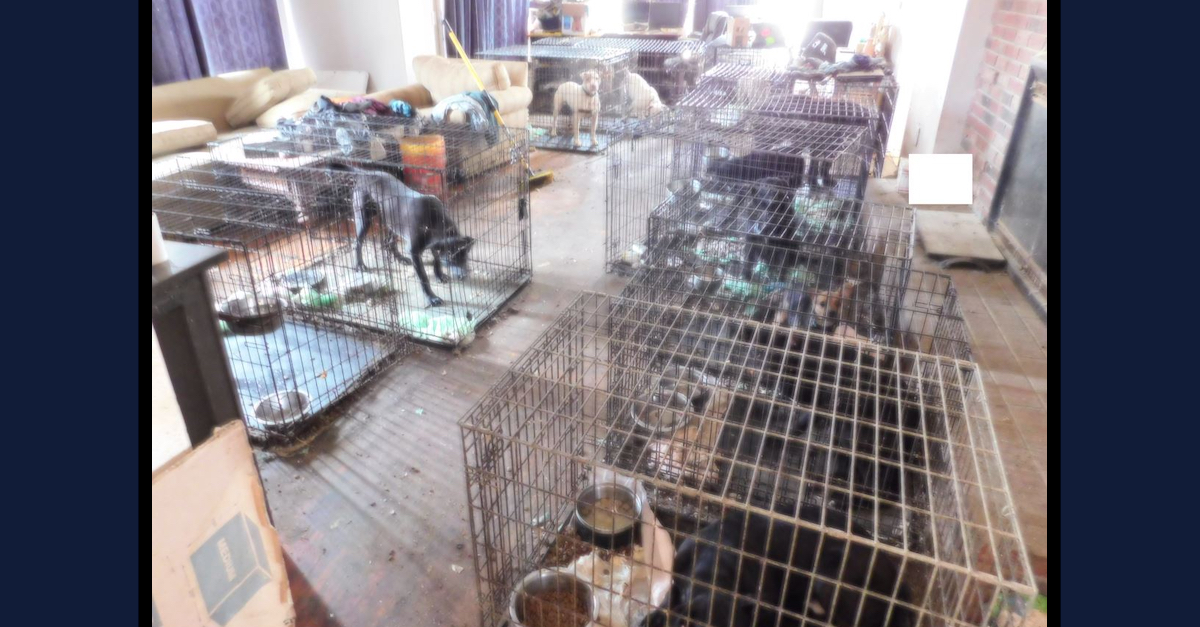 “The animals were all seized, transported and are receiving veterinary care,” the state police noted.  “The incoming transport of animals scheduled for today is being managed and the animals have predetermined adoptive homes. State Animal Control will be tracking and ensuring these animals are going to homes with proper care.”

CT Pregnant Dog and Cat Rescue, Inc., says on its website that its “mission is to rescue as many dogs and cats as possible.”

“In order to rescue more than two-three dogs/cats at a time our rescue will need volunteers for fostering,” the website says.  “Foster parents are highly needed and will help us take in more pets at a time. Another great way to get more pets saved is, obviously, adoption. If you or someone you know is interested in fostering or adopting please contact us. Donations are also accepted and highly appreciated.”

[All images via the Connecticut State Police.]