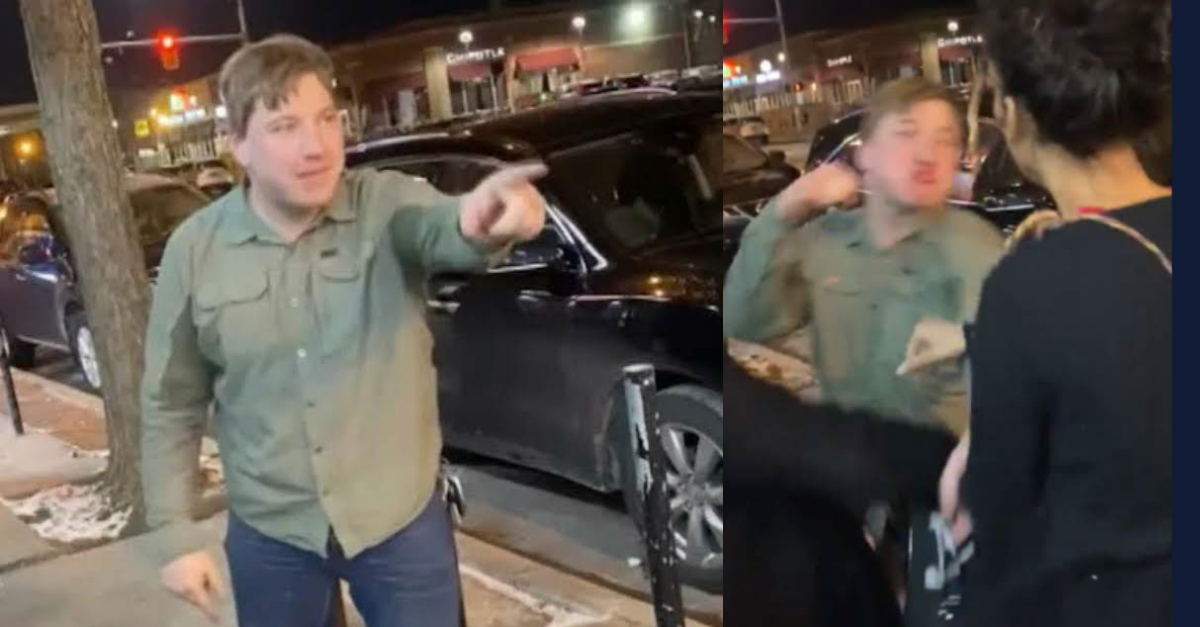 Andrew Walls (identified by Akron Police as the man seen above in a video shared on Facebook) is accused of attacking two women.

An Ohio man with alleged ties to the Proud Boys is charged with assaulting a Black woman in a brutal attack that was captured on video over the weekend.

Andrew Walls, 26, is accused of being the man in that video, which the victim’s father later posted to his Facebook page.

A man of the same name identified himself as a member of the Proud Boys in a January 2021 story in the Akron Beacon Journal. That man was also the same age and looked remarkably similar to the man seen in the video of the attack, according to several regional and international publications.

In the video of the attack, a man who appears to be intoxicated exchanges racial slurs with a group of white men outside a bar. He then abandons the conversation when he sees a group of people walking down the street and walks up to 23-year-old Cameron Morgan.

At that point, Morgan begins to object to the man’s rhetoric. She only gets a few words out before the man addresses her by using derogatory terms for both a woman and a Black person. The man then tells her to “shut up” and punches her in the face.

The victim’s sister recorded the incident and shared it on Instagram. She then sent the video to her father; he posted it on his social media accounts.

“I’m devastated right now. My 23-year-old daughter Cameron, who wouldn’t hurt anyone and has a heart of gold, was sucker punched by this racist guy in Highland Square in Akron last night for no reason,” wrote David Morgan. “She weighs maybe 100 pounds. Can someone please help me identify him! Please! I need to press charges! I’m heartbroken and sick to my stomach.”

The victim’s father also revealed on his social media page that his daughter had been dragged into the street by her hair and eventually fled the scene to be treated for a concussion before police could arrive.

Akron Police officers reported to the scene soon after the fight dispersed, an officer with the department told Law&Crime. Walls was the only person still at the scene, however, and looked to be roughed up from a fight, according to an incident report. The report filed by the responding officer also stated that Walls claimed he was the victim of a mugging.

Ms. Morgan reported the incident the next day, and soon people around the city, state, and country began to share the video of the attack. Police also benefitted from seeing the video, and within 24 hours had issued a warrant for Walls’ arrest, inmate records reveal.

Walls surrendered to police on Monday afternoon — one day after a warrant was issued for his arrest, inmate records reveal. He was booked into Summit County Jail for the night but was released the following day after his arraignment.

He is facing two counts of assault for allegedly attacking Morgan and another woman, according to Akron Municipal Court records, and one count of possessing a weapon while intoxicated.  The assault cases bear two separate docket numbers.

Walls posted a $25,000 bail soon after his arraignment and was released from custody. A temporary restraining order was granted for his victim.

He does not yet appear to have a lawyer.

Walls surrendered on Monday and was out on bail Tuesday (inmate record above).

Akron Police Chief Steve Mylett released a statement on Monday saying he was “deeply concerned” with what “clearly appears to be a racially motivated attack.”

In that statement, he also revealed that the Akron Police Department had been in contact with the FBI to see if the incident warranted a hate crime investigation.

“Hate has no place in our beloved city,” said Chief Mylett. “We will use every resource at our disposal to bring anyone who engages in racially motivated or bias based crimes to justice. We stand united with the victim of this heinous assault and her family to ensure justice is served.”

Law&Crime reached out to an FBI spokesperson to inquire about a possible hate crime investigation. No response was forthcoming.

The graphic video of the encounter is embedded below. Some viewers may find it disturbing.

I’m devastated right now. My 23-year-old daughter Cameron, who wouldn’t hurt anyone and has a heart of gold, was sucker punched by this racist guy in Highland Square in Akron last night for no reason. She weighs maybe 100 pounds. Can someone please help me identify him! Please! I need to press charges! I’m heartbroken and sick to my stomach.