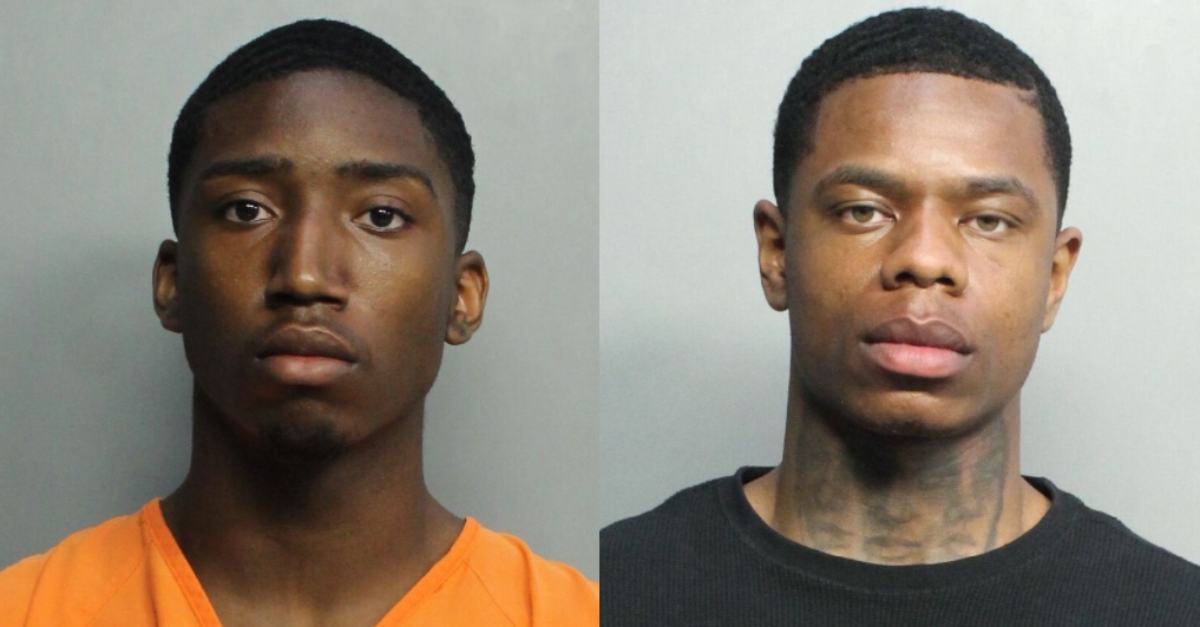 Two North Carolina men have been charged with murder in the death of a Pennsylvania spring breaker who was allegedly drugged and raped earlier this year.

Evoire Collier, 21, and Dorian Taylor, 24, both stand accused of murder in the first degree in connection with the overdose that authorities say took the life of 24-year-old Christine Englehardt at a Miami Beach, Fla. hotel on March 18.

As Law&Crime previously reported, the duo have long been suspects in the case. They were already charged with a slew of crimes including burglary with assault/battery, sexual battery by multiple perpetrators, petit theft, and fraudulent use of a credit card. Both men pleaded not guilty to those initial charges–which were handed down less than one week after the woman’s body was discovered at the Albion Hotel.

An arrest report obtained by The Miami Herald alleges that Englehardt was found lifeless and “semi nude” at the posh southern Florida hotel.

Surveillance footage cited by that report allegedly showed the victim entering the building with Collier and Taylor–who are allegedly seen on the same footage leaving the hotel less than an hour later.

Authorities believe the two men left the woman while she was unconscious–after allegedly sexually assaulting her–and stole many of her belongings of value including her phone, cash and credit cards.

Miami Beach Police Detective Luis Alsina testified during a bond hearing that Englehardt was never in any position to consent to any kind of sex and that she could be seen on video barely able to walk. Her condition was allegedly so bad, that at one point, Taylor can be seen holding the woman by her neck to maintain her balance.

The victim was remembered fondly by those who knew her–memories unfortunately tinged with the bitter knowledge that her life was cut short.

“To think that someone would do this to her, she was young too,” Hailey Davis, Englehardt’s friend told local ABC affiliate WPLG. “She had her whole life still to do things and she had dreams and goals and all these things she’ll never be able to do now because of them.”

“She had one of those laughs that that could light up an entire room,” another friend, Samantha DiFrancesco, told the Herald. “She’s the last person you’d ever expect anything like this to happen to.”

While authorities believe they’ve got the men responsible, they’re still not entirely sure whether or not the “green pill” that Englehardt was allegedly given just before she died was the primary cause of death–something the defense has seized upon.

The Miami-Dade Medical Examiner’s Office released an autopsy report that showed Englehardt had cocaine, lidocaine, alprazolam, ibuprofen, and other drugs in her system when she died.

Collier’s attorney Phil Reizenstein told the Herald he was “stunned” that an indictment for murder was returned in the case.

“I think they’re going to regret doing this,” the defense attorney told the outlet. “I think by the time I’m finished with them, they’re never going to be able to say she died of this.”

Taylor faces an additional murder charge for the alleged fentanyl death of a second tourist, Walter Riley, 21, according to court records reviewed by WPLG and the Herald.