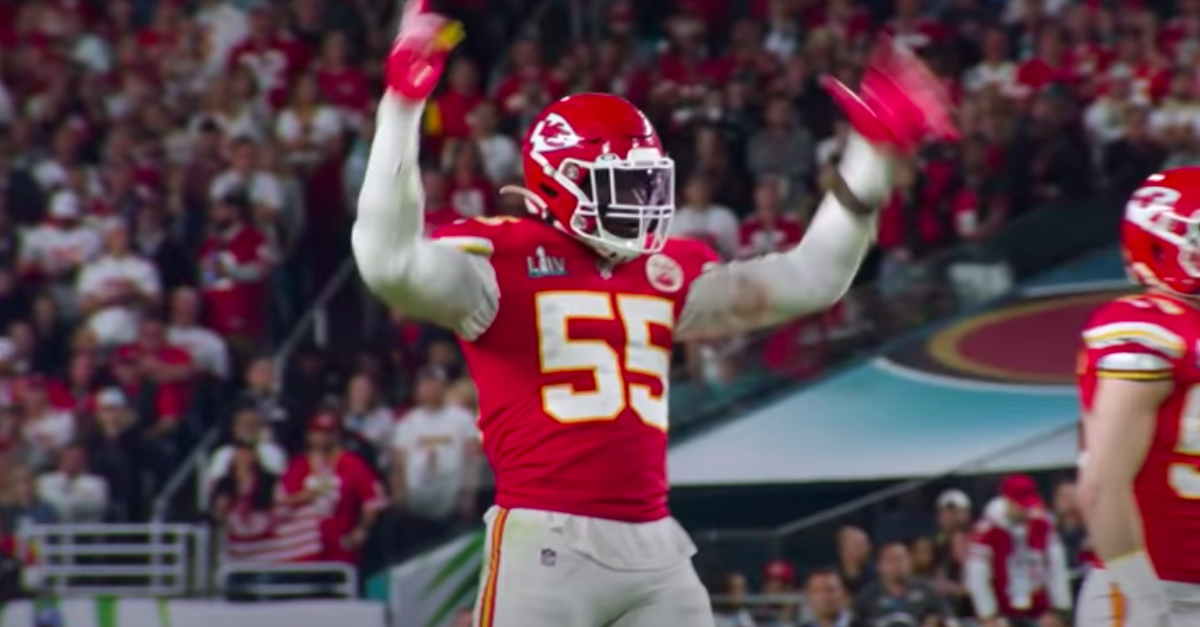 Star defensive end for the Kansas City Chiefs Frank Clark on Friday was charged with felony possession of an assault weapon in California and could face up to three years in prison if convicted, news outlets reported.

According to a report from The Kansas City Star, a spokesperson with the Los Angeles County District Attorney’s Office said that the charge stems from Clark’s March 13 arrest by the California Highway Patrol (CHP).

The CHP and DA’s office did not immediately respond to emails requesting comment and information.

The Star reported that Clark and another man named Charles Smith were pulled over by CHP at 11:45 p.m. on March 12 because the vehicle they were driving did not have a front license plate displayed. Citing a copy of the police report, the paper reported that after approaching the vehicle, the officers allegedly noticed a bag in the backseat with the muzzle of a firearm sticking out. The officers searched the car and found a loaded handgun and a loaded rifle and both men were placed under arrest, according to the report.

Clark, a 28-year-old Los Angeles native, was reportedly released the next morning on $35,000 bond and is scheduled to appear for his arraignment on July 14.

Clark also made headlines last month when he was arrested in Los Angeles on firearms charges for a second time. Records obtained by The Star revealed that on June 20, Clark and several other men were pulled over by officers with the LAPD on Grand Avenue for a vehicle code violation. The officers in that instance also noticed a firearm sticking out of a bag in the car. A search revealed that the firearm in question was an Uzi submachine gun, and Clark and the other men were arrested for possession of a concealed firearm in a vehicle, the paper reported. Clark was reportedly again released the next day after posting bond of $35,000.

Criminal defense attorney Alex Spiro, who is representing Clark in both matters, said that the Uzi found in the vehicle belonged to one of Clark’s body guards, according to a report from ESPN.

Clark has not yet been formally charged for the June firearm arrest, as law enforcement authorities are still investigating the incident, a spokesperson for the district attorney’s office told The Star.

The two firearm arrests were not the only times that Clark allegedly found himself on the wrong side of the law. As a star on the Michigan Wolverines football team in 2014, Clark was arrested on suspicion of domestic violence stemming from an incident at a hotel in Ohio. Though he eventually pleaded guilty to a lesser charge of disorderly conduct, the incident resulted in him being removed from the Wolverines football team.

The 63rd overall pick in the 2015 NFL draft, Clark was traded from the Seattle Seahawks to the Chiefs in 2019. He had a total of 14 sacks in his first two seasons and was selected to the Pro Bowl in both 2019 and 2020. He was also a major factor in the Chiefs’ playoff runs, totaling 8 postseason sacks over the two-year span.

Clark signed a five-year deal with the Chiefs worth $104 million, including $63 million guaranteed.