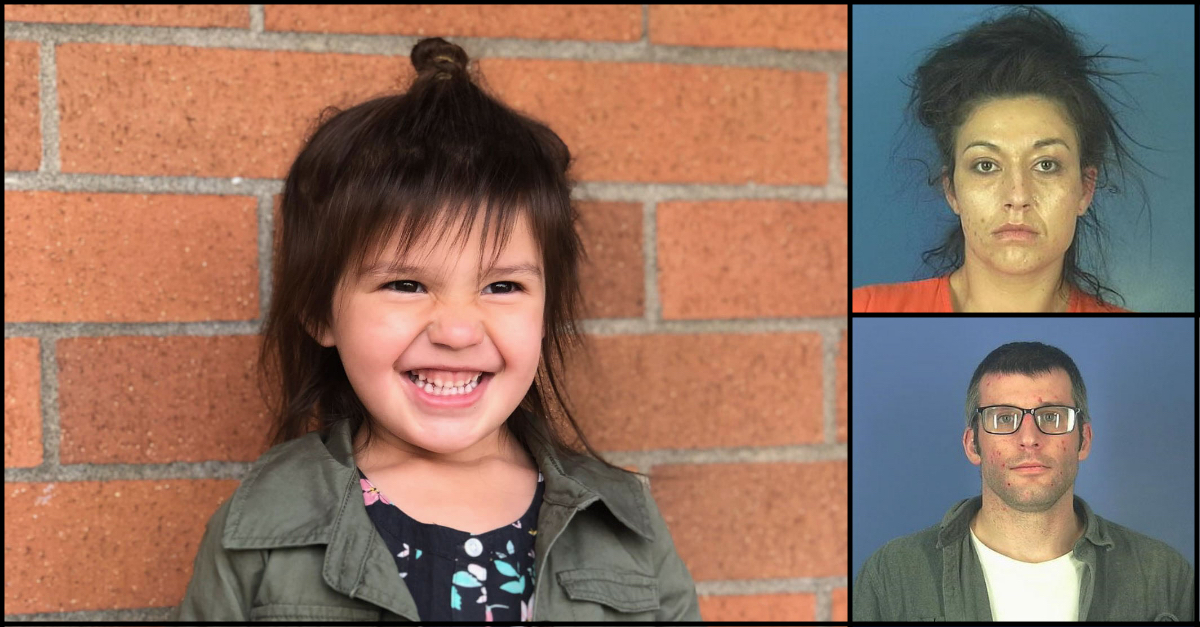 The father of a Washington girl who has not been seen in over 13 months entered a form of a guilty plea to child endangerment charges this week during a televised court appearance.

Andrew Carlson, 37, appeared via Zoom for a pre-trial hearing in Grays Harbor Superior Court on Monday, where he entered an Alford plea to two felony charges of child endangerment with a controlled substance.

“Mr. Carlson, instead of making a factual statement, you’ve stated that you do believe that this state has sufficient evidence to prove this case at trial and that in order to take advantage of the plea agreement, you want to enter a plea of guilty to counts two and three, is that correct?” asked Judge Katherine Svoboda during the proceedings.

Alford pleas, which are named after the U.S. Supreme Court case North Carolina v. Alford, allow defendants to acquiesce to criminal charges — usually in return for some sort of lighter sentence or deal — but without confirming the underlying factual basis which gave rise to the case.  Generally, the court has to locate a factual basis for the charges “from a source other than the plea.”

Carlson said little else during the hearing and will now be sentenced on March 28. 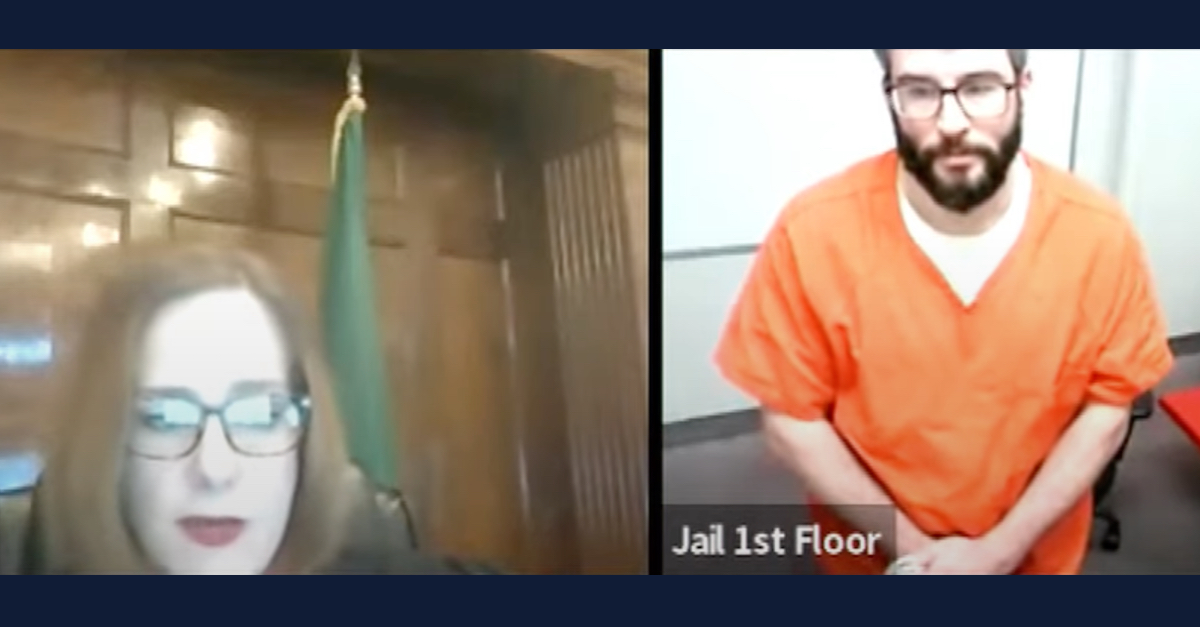 There was no mention on Monday of Carlson’s 5-year-old daughter Oakley, who has been missing now for 13 months.

Carlson and Oakley’s mother, Jordan Bowers, have been in custody at the Grays Harbor County Jail since December 6, according to inmate records.

Court documents detail the events that led to their arrest on charges of obstruction of law enforcement and first-degree manslaughter.

Jessica Swift, the principal of the local elementary school that Oakley’s 6-year-old sister attended, contacted the Grays Harbor Sheriff’s Office on December 5 requesting a welfare check for Oakley. She informed deputies that she had not seen the girl when visiting the family home and that Oakley’s sister had said the girl had returned to live with her foster parents. Swift had determined that to be false, per court filings.

Oakley had been sent to live with foster parents when she was still an infant but returned to her biological parents in late 2019. It is unclear why she went into foster care, but court records show that Carlson and Bowers were both criminally charged in cases the month before Oakley was placed into foster care.

Law&Crime also obtained documents revealing that the parents of Oakley had both filed for bankruptcy soon after Bowers became pregnant.

After Swift requested a welfare check, police went to meet the family at a local motel, according to an affidavit filed by the Grays Harbor Sheriff’s Office. The family had been displaced due to a fire at their residence the previous month. 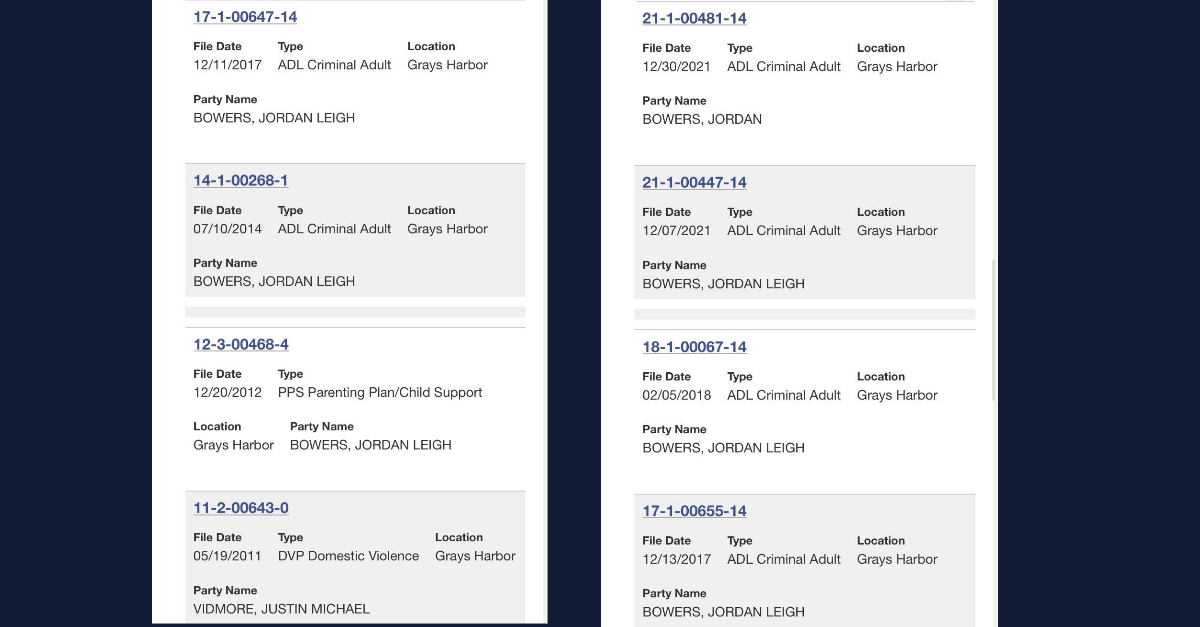 Bowers was not offered the same plea deal as Carlson because of her criminal history (above).

Carlson claimed Oakley was with his parents, but his parents denied having the girl to police and later issued a handwritten statement revealing they had not seen their granddaughter since December 2020.

When deputies returned to question Bowers and Carlson, they became uncooperative and were taken into custody. Carlson also reported his daughter missing at that time, according to deputies.

The next day, the Grays Harbor Sheriff’s Office and agents with the FBI began to search the 300-acre farm Carlson had purchased with his ex-wife Amber for clues. The Sheriff’s Office also issued a brief statement saying they “consider the circumstances surrounding the child’s disappearance as suspicious.”

Furthermore, the statement confirmed that Jordan Bowers and Andrew Carlson of Oakville are “considered persons of interest at this time.”

That search of Carlson’s farm ultimately yielded no sign of the child, but it did result in one additional charge against Carlson and Bowers.

“Detectives investigating the disappearance of five-year-old Oakley Carlson discovered information that the parents Andrew Carlson and Jordan Bowers have not been providing medication prescribed to their other daughter who is six years old as required by her doctor,” announced the Grays Harbor Sheriff’s Office. “The medicine has been withheld for approximately 15 months. The medication is necessary for her physical wellbeing and puts her at risk for physical impairment and could eventually result in death.”

That charge came just as the couple was about to walk free due to the manslaughter charge being dismissed because of a lack of evidence.

In early February, both were charged with an additional two counts of endangerment with a controlled substance. Authorities learned that two children, aged 2 and 6, living in the home had ingested or been in the presence of methamphetamine after the Department of Children, Youth and Families tested the children’s hair follicles, according to court records.

Bowers also has a 10-year-old son from a previous relationship, while Carlson has a 13-year-old daughter with his ex-wife.

Despite Carlson entering a guilty plea to two counts of a Class B felony, which is punishable by up to 10 years in prison, he will be sentenced to no more than 12 months on each count. These sentences will also run concurrently, according to the judge.

Bowers, meanwhile, will be going to trial next month on the same two charges along with the initial charge of abandonment of a dependent person in the second degree, a Class C felony.

She did not receive the same plea deal offer as Carlson because of her lengthy list of prior convictions on charges including domestic violence and unlawful harassment, court documents revealed.

If convicted, she would be facing time in prison, whereas Carlson’s sentence allows him to remain in the Grays Harbor County Jail.

Read some of the court file below.