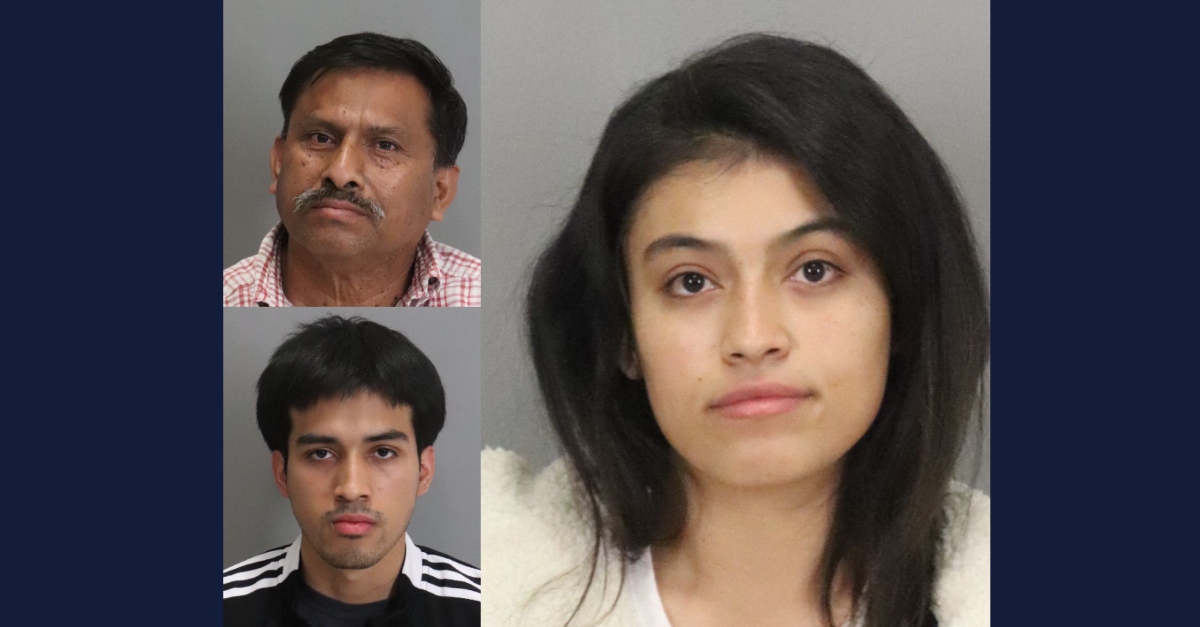 “Around 7:00 p.m., Defendant 2 [the uncle] knelt down beside the victim who was lying on the floor, and he placed one hand on the victim’s chest and one hand on her back,” a statement of facts says. “He applied pressure to the victim and maintained pressure for approximately 10 minutes. He stated the victim was alive at the beginning of this and he closed his eyes to pray. Upon opening his eyes, he believed the victim had died. They continued to pray and did not perform any lifesaving measures for the victim.”

Claudia, the mother, was charged back in January with felony child abuse causing death. Her brother and father were only recently arrested, with police saying they took the men into custody on Wednesday on the very same charge.

As previously alleged, Claudia took the child to the grandfather’s San Jose church on the morning of Sept. 24, believing the girl to be possessed by a demon. The grandfather confirmed to Mercury News in a report earlier this week that they intended to “liberate her of her evil spirits” but denied that she died by his own hands.

“If you read the Bible, you’ll see that Jesus casts away demons and made sick people healthy again,” said the grandfather, identified in the article as Rene Huezo, pastor of Iglesia Apostoles y Profetas. “It’s not when I want to do it, it’s when God, in his will, wants to heal the person. The preacher is like an instrument of God. What we do is what God says.”

According to law enforcement documents, Claudia said she began to believe on Sept. 23 that a demon possessed her daughter.

“Defendant 1 explained that on September 23, 2021, she began to believe the victim was possessed, because the victim would wake up and scream or cry periodically,” the statement of facts says.

At first, the mother and the uncle prayed for the girl at the woman’s home in Mountain View; then they drove the child to the church in nearby San Jose around 6:30 in the morning.

The mother said she held the girl around her waist and neck to help her throw up, believing it would get the “spirit” out. She tried to open her daughter’s mouth with her hands, and at some point, the grandfather arrived at the church to help them in prayer.

“After that, Defendant 1, Defendant 2, and Defendant 3 were all holding victim attempting to cause her to vomit,” the statement of facts said.

One of them held her by the neck, while another held her around the abdomen, and the third had her by the legs, according to this version of events.

“Defendant 1 described that the three parties would switch where they held the victim while trying to induce vomiting,” the statement of facts said. “Eventually, the victim vomited a clear/purple liquid.”

The mother said she believed that her daughter died sometime between 6 and 6:30 p.m., but she only called 911 at approximately 8:12 p.m., authorities said.

“The defendants did not perform lifesaving measures to help the victim,” the statement of facts said. “The victim last ate on Thursday[,] September 23, 2021 around 9:00 p.m. The victim was only provided about 6 oz of water from Thursday up until the time of her death.”  The girl died on Sept. 24.

In an initial account to officials, the mother allegedly told an officer she tried to stick her finger down the girl’s throat and squeezed her neck to induce vomiting. The child fell asleep several times while the mother pushed down on her throat, according to this version of events.

Uncle Renee allegedly told a similar story. He and the mother took his niece to the church, and put her in front of the altar, according to his version of the events. He said he believed she was possessed because she would cry and scream, and he thought she was in pain. He told a similar account as the mother, saying he, she, and the grandfather all held the girl.

“Around 7:00 p.m., Defendant 2 knelt down beside the victim who was lying on the floor, and he placed one hand on the victim’s chest and one hand on her back,” the statement of facts says. “He applied pressure to the victim and maintained pressure for approximately 10 minutes. He stated the victim was alive at the beginning of this and he closed his eyes to pray. Upon opening his eyes, he believed the victim had died. They continued to pray and did not perform any lifesaving measures for the victim.”

He re-enacted what he believed to be the moment of death in a follow-up interview, in which police gave him a doll, according to officers. He allegedly placed a hand on the doll’s chest and another hand on the back. But he denied in a third interview to putting his hands on the girl’s chest and back, authorities said. He allegedly also said he attempted mouth-to-mouth resuscitation. He said that he initially did not tell this to detectives because he was scared and believed that they would not believe him, authorities said.

But he changed his story again on Wednesday, officials said.

“In this statement he admitted that at one point he held Victim by the stomach, off the ground facing downward, while Defendant 1 held her by the neck,” officials wrote. “He stated this lasted for 25 minutes. Defendant 2 again admitted he knelt down beside the victim, who was lying on the floor, placed one hand on the victim’s chest and one hand on her back, and applied pressure to the victim and maintained pressure for 10 minutes.”

Grandfather Rene allegedly gave accounts that corroborated his relatives. He said he arrived at the church in the afternoon of Sept. 24.

The grandfather said he stood over the child and prayed while she cried. He remembered her vomiting at around 4:30 p.m., and he moved her body to the south end of the church at around 7 p.m. She was not moving or breathing, he allegedly said. The grandfather allegedly said he held her gently to comfort her twice during the time he was there at church.

In a follow-up interview with detectives, he said that his daughter told him the girl was possessed by a demon. They held two “prayer sessions” on the child.

“The first prayer session lasted about an hour and a half, and he described holding victim tightly by her torso while Defendant 1 held her arms and Defendant 2 held her feet,” officials said. “He stated Victim was fighting back and this required him to hold her very tightly.”

The child fell asleep. They held a second prayer session in which he held the girl around her torso with her back to his stomach.

The mother restrained her by the head, and the uncle had her by the feet, according to this version of events. The girl vomited. The grandfather allegedly said he left outside the room to take a phone call, and he returned to find the girl dead. Authorities said he did not perform any lifesaving measures on her.

Several of the court documents and the original press releases from the police department and the DA’s office are here: