Kevin Strickland Exonerated, Out Of Prison After 43 Years 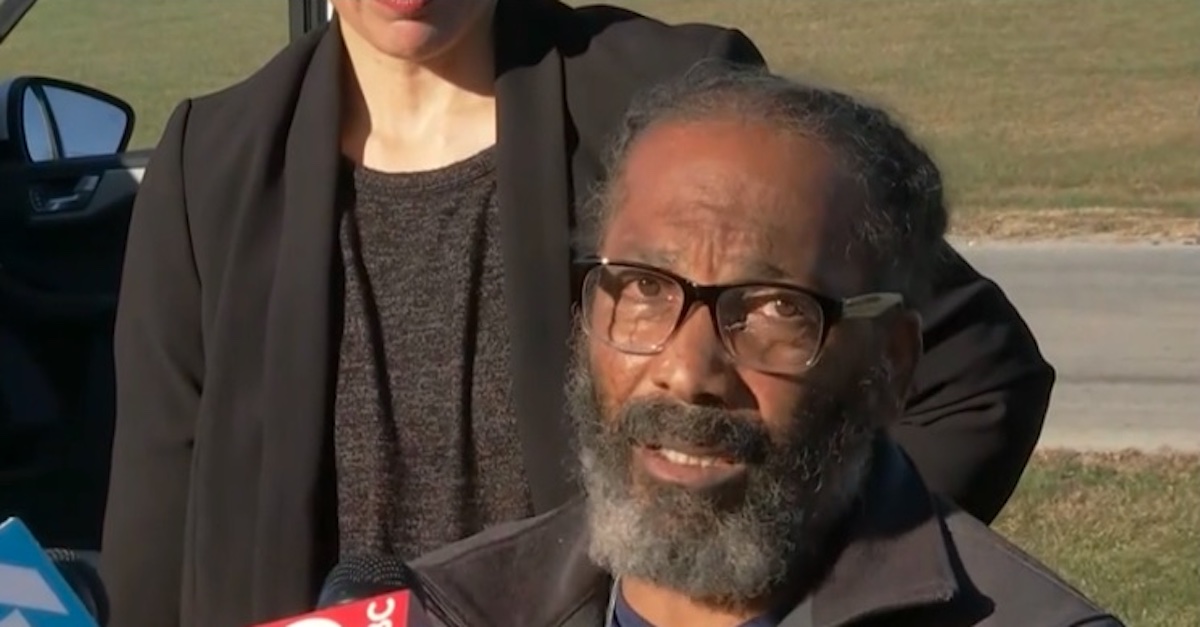 A Missouri man who has spent more than 40 years in prison is now a free man, after being convicted of three murders he didn’t commit.

Kevin Strickland left the Western Missouri Correctional Center on Tuesday. He had been in prison since he was 18 years old. After his first prosecution stumbled with a hung jury, a second panel convicted him of three murders in 1979, despite no physical evidence tying him to the crime. An eyewitness later recanted her testimony.

The only surviving eyewitness to the crime was 20-year-old Cynthia Douglas, who identified Strickland from a lineup. She later walked back her testimony, and said that she was pressured into identifying Strickland, according to a Kansas City Star report.

Tricia Rojo Bushnell, the director of the Midwest Innocence Project, confirmed that Strickland is back with his loved ones.

Today, Kevin Strickland is finally home, 43 years after being ripped away from his life and family. It took not just a village, but a movement–all of you– to bring him home.

Strickland has always maintained his innocence.

Retired Missouri Judge James Welsh ordered that Strickland be immediately released on Tuesday. Welsh ruled that Strickland’s conviction should be overturned because it was not based on physical evidence but only on the since-recanted eyewitness testimony.

“I’m still in disbelief,” Strickland told reporters during a press conference shortly after leaving the jail, which was broadcast by a local Fox News station in Kansas City. “I didn’t think this day would come.”

Strickland said he learned about his exoneration and pending release while inside the prison, watching a soap opera. He said he saw his name and picture flash on the screen with the news.

“I just couldn’t believe what I was hearing,” he told reporters, adding that he soon heard other inmates yelling and banging on the walls as the news of his exoneration spread.

Strickland said he was grateful for his legal team, and for the time Welsh took in examining his decades-old case.

“I’d like to tell him thank you for listening,” Strickland said.

However, Strickland was clear that he shouldn’t have been in prison at all, and that the system that put him there is deeply flawed.

“I was an easy mark and the police took advantage of it,” Strickland said.

“It needs to be torn down and redone, from the arresting officers to the presiding judge,” Strickland later added, when asked about his thoughts on the criminal justice system. “It doesn’t work. It worked here in the long run, but it took 43 years to get here, when they knew from day one that I wasn’t the person that committed that crime. It needs to be revamped.”

Strickland, who is Black, was tried twice in 1979. His first trial ended in a hung jury, with the panel’s 11 white jurors voting to convict and the lone Black juror voting to acquit, according to a Kansas City Star report.

He was later convicted by an all-white jury. He was sentenced to 50 years in prison without the possibility of parole, the Kansas City Star report said.

In May, the Jackson County Prosecutor’s Office said it had determined that Strickland is “factually innocent,” and prosecutors called for Strickland to be exonerated and immediately released.

But it didn’t happen.

Strickland’s exoneration is largely due to the passage of a wide-ranging public safety law that allows prosecutors and circuit attorneys to request that a conviction be vacated or set aside if there is information showing that the person convicted is innocent or was erroneously convicted.

Without this law, however, it is unlikely Strickland would have gotten any other kind of reprieve from Missouri officials. Parson—who pardoned gun-toting married couple Mark McCloskey and Patricia McCloskey, who stared down Black Lives Matter protesters in front of their house while carrying an AR-15-style rifle and a semiautomatic pistol, respectively—refused to pardon Strickland and had remained unconvinced of his innocence.

However, it appears that both Parson and Schmitt have accepted Strickland’s release, even if they are not celebrating it.

“The Court has made its decision, we respect the decision,” Parson said Tuesday on Twitter.

Earlier this year, I signed SB 53, which created a judicial procedure for prosecuting attorneys to use, in cases like this one, where the prosecutor believes that there was a miscarriage of justice and a wrongful conviction was entered. https://t.co/xa5QgBtfxw

The Court has made its decision, we respect the decision, and the Department of Corrections will proceed with Mr. Strickland’s release immediately.

“In this case, we defended the rule of law and the decision that a jury of Mr. Strickland’s peers made after hearing all of the facts in the case,” Schmitt spokesperson Chris Nuelle told Law&Crime in an email. “The Court has spoken, no further action will be taken in this matter.”

Despite his exoneration, Strickland will not get any financial support from the state, and is instead relying only on private donations. A GoFundMe has raised more than $300,000.