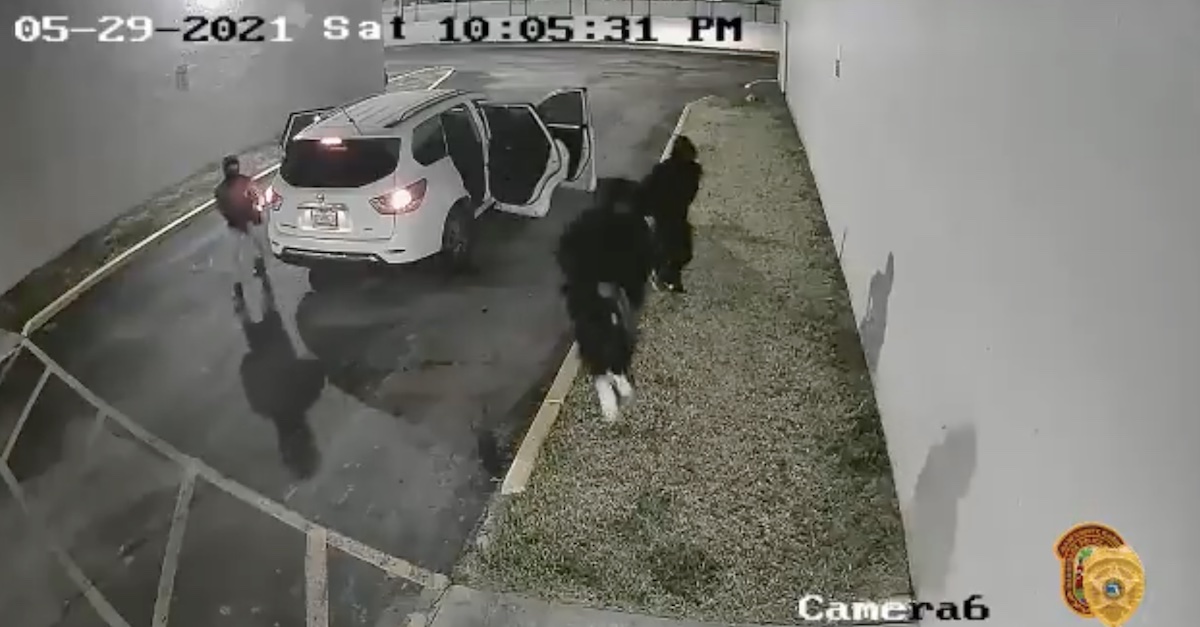 The Miami-Dade Police Department released a video on Monday showing the suspects in the early Sunday shooting that left two dead and more than 20 people injured. The video shows three masked suspects exiting a white Nissan Pathfinder and running towards El Mula Banquet Hall, where they allegedly fired “indiscriminately into [a] crowd” and murdered two people that had gathered for a rap concert.

“According to investigators, the establishment was hosting a scheduled event and several patrons were standing outside. The subjects’ SUV approached the front of the business, three subjects exited the vehicle and began shooting indiscriminately into the crowd,” police said in a statement. “The subjects entered the SUV and fled the scene.”

Judging by the time stamp on the video, the shooting took place in a matter of seconds.

*RELEASE OF VIDEO SURVEILLANCE* We are releasing video footage of the vehicle/subjects involved in the shooting that occurred in Northwest Miami-Dade on 5/30/21 that left two deceased and 21 others injured. Anyone with information is URGED to contact @CrimeStopper305 immediately. pic.twitter.com/X2jlxYFrEL

The video appears to show two suspects exit the vehicle from the back seat and one more from the passenger’s side front door. After the shooting, each suspect enters through the same door that they intentionally left open. It could be the case that a fourth person was the getaway driver, though police have not said as much. The shooting suspects are believed to be males. The victims’ ages reportedly range from 17 to 32.

Clayton Dillard III, 26, is reportedly one of the two people who was killed. His distraught father, Clayton Dillard Sr., condemned the killers on Monday during a press briefing.

STOP THE VIOLENCE!@MDPD_Director: "that is the pain that affects our community right there right before you"

Victim's father breaks down during briefing.

If you have any information on this shooting, call Miami-Dade Crime Stoppers at 305-471-TIPS. https://t.co/RGZvj3OGYj pic.twitter.com/pcjzKwkGWj

“You all killed my kid!” the grieving father yelled. “You must burn! You’re gonna burn, you hear me?”

“Y’all took something that was given to me as a gift,” he said. “Whoever did this will burn!”

Miami-Dade Police Director Alfredo “Freddy” Ramirez was speaking at the time Dillard cried out for justice. Ramirez had just slammed the killers for “targeting individuals and at the same time hitting innocent people that have nothing to do with their beef, ruining families, harming mothers who are here today.”

“That’s the pain that you see,” Ramirez said, referring to Dillard. “That is the pain that affects our community right there before you. That’s why together all of us we must work harder to bring justice to these families who are crying as you hear right now. Know that the Miami-Dade Police Department will not stop. We will bring justice. Our community is united.”

Family members of other two victims spoke to WPLG after the shooting.

Angelica Green said her son had been shot in the stomach. She was one of the loved ones waiting outside of the emergency room at Jackson Memorial Hospital.

“He called us frantic, saying he had been shot, that it hurts and that he loves us,” Green said. “My husband was like, ‘No, stay with us.'”

Her son described the shooters as “guys” wearing ski masks and hoodies, she said.

“You never know what it’s like until you have something jerked away from you,” said Chad Harris, the father of a 19-year-old girl. “She’s in surgery now. We’re just praying. Praying for all the victims, praying for all the families.”

“I am at the scene of another targeted and cowardly act of gun violence, where over 20 victims were shot and 2 have sadly died,” MPD Director Ramirez tweeted Sunday. “These are cold blooded murderers that shot indiscriminately into a crowd and we will seek justice. My deepest condolences to the family of the victims.”

Ramirez said that a $100,000 reward was offered by Marcus Lemonis, host of the CNBC series The Profit.

Grateful for this contribution @marcuslemonis! This is our community, we are stronger together. We need our county to step up with information. If you know something, you can remain anonymous by calling @CrimeStopper305. https://t.co/hkxv6sNhjg

Ramirez said later that ATF Miami added $25,000 to the reward.

Thank you @ATFMiami for adding $25,000 to the reward, where so many victims and families were sadly affected by senseless gun violence. Your support is genuinely embraced by the MDPD and our community. Call @CrimeStopper305 with any information, you can remain anonymous!