Man Just Released on Bail Traveled More Than an Hour Away to a Walmart, Threatened People with Stolen Pellet Rifle: Police 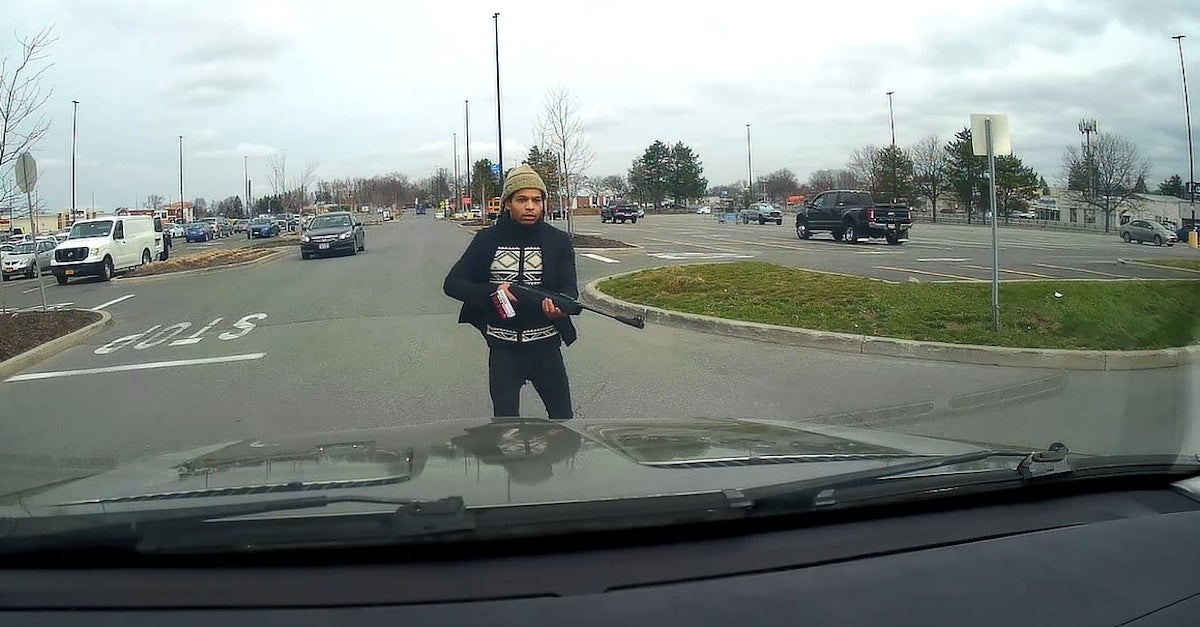 Police in Colonie, N.Y., a suburb of Albany, say a man released Wednesday morning on cash bail from a jail more than an hour away quickly traveled to their town, stole a pellet rifle from a Walmart, and then used the device to threaten people while attempting to steal two cars.

The defendant, Daquan D. Forehand, 25, of Utica, is now charged with two counts of second-degree attempted robbery, menacing a police officer, and fourth-degree grand larceny. All of those charges are felonies. Forehand is also charged with one count of resisting arrest, three counts of fourth-degree criminal possession of a weapon, eight counts of second-degree menacing, and petit larceny. The latter charges are all misdemeanors.

According to the Colonie Police Department, Forehand bailed out of the Oneida County Jail, traveled to Latham, N.Y. (a hamlet within Colonie), and went shopping with a relative at a Walmart. Inside, the police say “he suddenly grabbed the pellet rifle from the store clerk” and “ran through the store into the parking lot.”

From there, he allegedly “ran through the area, menacing multiple people and attempting to steal at least two vehicles.” 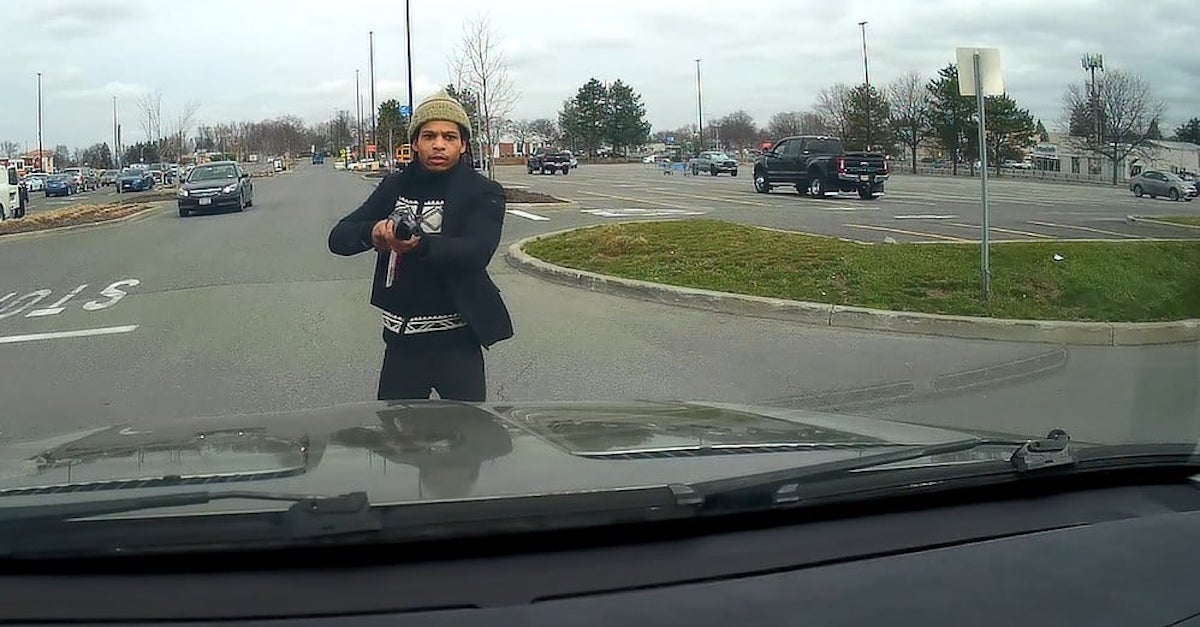 “Throughout this incident, until just prior to being taken into custody, all the witnesses, including police officers, believed this pellet rifle to be an actual firearm,” the Colonie Police Department said in a Facebook post on Thursday. The incident occurred Wednesday at about 12:20 in the afternoon.

“Colonie Police received multiple 911 calls reporting an individual with a rifle running near the Wal-Mart store at 800 Loudon Road,” the department said in a previous post. “This individual, while running to various locations in that vicinity, pointed this weapon at multiple victims, and attempted to steal vehicles from at least 2 victims. These calls initiated a large scale response from the Colonie Police Department, and the individual was quickly located on Route 9, under the Latham Traffic Circle overpass. After a brief struggle, the defendant was safely detained. Multiple Officers sustained minor injuries (scrapes and bruising) while taking him into custody. The individual was brought to Albany Medical Center for a physical/mental evaluation, but at this time does not appear to be injured. He will be formally charged upon his release from the hospital. No civilians were injured during this incident. The weapon, which was determined to be a Ruger pellet rifle, was recovered at the scene, and was determined to have been stolen at Wal-Mart just prior to this incident.” 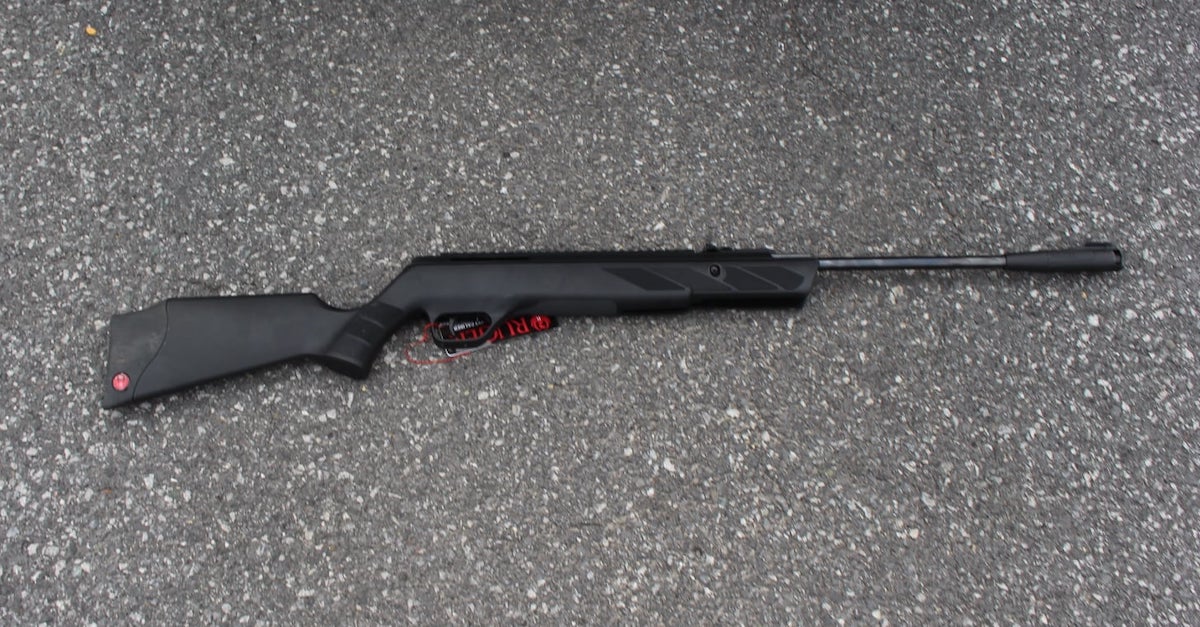 The department praised its officers for the way they took Forehand into custody.

“The multiple Officers from the Colonie Police Department who responded to this incident and located the individual showed tremendous restraint, being able to safely detain this individual using minimal force, in a chaotic scene where the use of deadly physical force would have been justified,” the Facebook post continued. “Officers remained calm and used rapidly developing information from witnesses to make split-second decisions, ultimately resulting in a successful outcome.”

Police noted that the Walmart was put into temporary lockdown. Witnesses driving through the area and victims were encouraged to call the police to report what they saw.

Under New York law, pellet guns are not directly defined as “firearms.” However, the charges suggest pellet guns are considered “weapons” under other statutes. Elsewhere, the laws state that “air rifles” are minimally regulated; they cannot be possessed by individuals under age 16 without direct supervision.

The Colonie Police Department added that Forehand had been in custody prior to the incident at the Oneida County Jail, more than an hour and a half west of the scene of the arrest in Latham, since March 7th. He was being held “on unrelated domestic violence charges,” that department said.

Forehand was arraigned in the Latham/Colonie incident on March 31 and remains in custody at a local hospital “under the supervision of the Albany County Sheriff’s Office,” police said. Forehand “does not appear to be injured as a result of this incident” but “is expected to undergo a mental health evaluation.”

“The Colonie Police Department would like to thank the multiple witnesses who reported this incident, including many whom made brave attempts to follow him and assist in taking him into custody, while relaying vital information to responding Officers,” the department concluded.

Utica is within Oneida County, where Forehand was incarcerated prior to the Wednesday incident in Colonie/Latham.

The contempt of court statute under which Forehand is charged says “[i]ntentional disobedience or resistance to the lawful process or other mandate of a court” is a crime (unless it involves a labor dispute).  Records indicate that he violated an order of protection against a relative, thus resulting in the additional charge.

Oneida County District Attorney Scott McNamara told Law&Crime on Monday, April 5, that Forehand had graduated from the City of Utica’s mental health court on July 2, 2019, regarding even earlier incidents.  Forehand agreed to be placed in mental health court in return for a promise by prosecutors to dismiss the earlier accusations against him.  McNamara said it was common to reach such deals with defendants where serious underlying mental health issues are present.  The premise behind mental health court is to address and fix the underlying issues without further legal proceedings, he explained.

Under New York law, the “potential dangerousness” of a suspect or defendant is not part of the legal calculation as to whether an individual can be held behind bars pending trial. That requirement was removed from the law in the early 1970s in the Empire State. Other states do allow judges to incarcerate individuals between arrest and trial based on a finding of presumed dangerousness.

Prosecutors couldn’t lock Forehand up until they could prove a “persistent failure to appear” before a judge.  When that occurred, the court “had to set the least restrictive bail,” McNamara said.

“Until we had distinct failures to appear — he’s allegedly committing nonviolent offenses, most of which are misdemeanors — you cannot set bail for them under our new laws,” he added.

McNamara said judges differ as to what they consider a “persistent” failure to appear. Here, Forehand was ultimately incarcerated earlier in 2021 on a $1,000 bail.

The prosecutor said that prior to New York’s bail reform laws, his office would have sought bail after several repeated “out of control” offenses.  Once in jail, the authorities would have “tried to get” the defendant “stabilized,” likely through pharmaceuticals.

“We don’t have that ability any more,” McNamara said. “It’s just a revolving door.”

Defense Attorney Matthew Fanelli, who is Forehand’s counsel in the Utica matters, told Law&Crime on Monday, April 5 that he agreed the cases were the result of a mental health emergency.

“I don’t believe this particular case acts as a litmus test for any bail reform issues that exist,” Fanelli said. “Bail had been set.”

The defense attorney pointed to earlier agreements by Forehand and prosecutors that mental health treatment was the best course of action.

“The primary goal in this matter was to address a very significant mental health crisis . . . I hope very seriously that is still an option,” Fanelli said.

Fanelli noted that Forehand had undergone a competency evaluation while he was in the Oneida County Jail and that other evaluations were ongoing.  Fanelli said his legal objective was to secure additional treatment for Forehand — but Forehand’s sister bailed him out of jail as that process was playing out.

“I don’t think Mr. Forehand had the capacity to form any criminal intent whatsoever” in the Colonie/Latham incident, Fanelli said. “I certainly commend the actions of the police department in this particular respect . . . it caused a lot of fear to the public — and the responding police officers — for very clear reasons. I commend their ability to manage that situation safely for everybody involved,” including for his client.

[Editor’s note:  this report has been updated Monday, April 5, 2021 with reaction from the prosecution and from the defense.]

[image via the Town of Colonie, N.Y. Police Department]