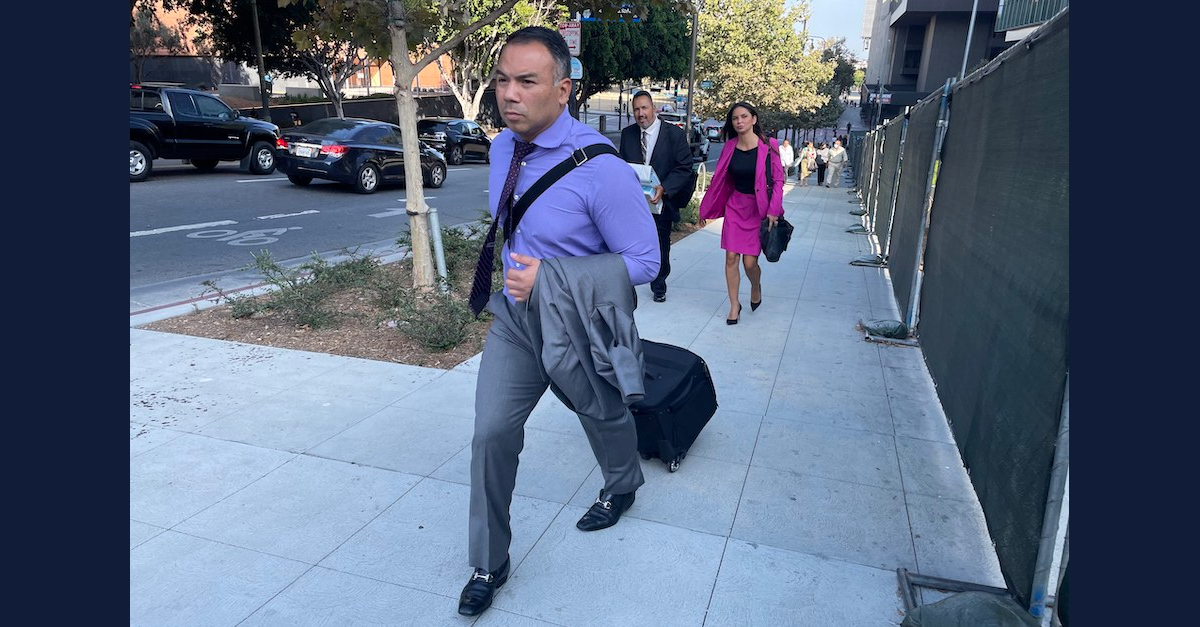 Attorney Gabriel Zendejas-Chavez, front, leaves the federal courthouse in downtown Los Angeles with his legal team after the first day of testimony in his criminal trial. (Photo by Meghann Cuniff of Law&Crime.)

A lawyer served as a key facilitator for a ruthless Mexican Mafia racketeering conspiracy based in Los Angeles County jails, traveling to prisons up and down the West Coast to pass notes between members while “hunting down” government informants and helping launder money, a prosecutor told a federal jury on Wednesday.

A defense attorney for Gabriel Zendejas-Chavez said he’s been falsely accused by Mafia members looking for leniency in their own criminal cases, and his prominence within the gang stems not from crimes but from his prowess as a lawyer who helped free a longtime Mafia leader who had been serving a life sentence for drugs.

“Mr. Chavez’s name spread like wildfire. They thought, ‘He is the one who can get us out,’” said Meghan Blanco, a criminal defense lawyer based in Laguna Niguel, California. “That is what Mr. Chavez was doing in late 2013 that caused him to get on law enforcement’s radar.”

Assistant U.S. Attorney Gregory Bernstein, however, said Chavez’s status as a lawyer gave him key access to the jails and prisons, which he abused to try to pass notes between incarcerated Mafia members, distribute drugs and facilitate murder and extortion plots. Chavez was “a key component of this network of illegal communications” who intimidated other gang members out of testifying against Mafia members, Bernstein said, and “played an invaluable role in the success of the Mexican Mafia.”

With 140 members, the Mexican Mafia is the controlling organization for most Latino street gangs, including MS-13 and the Sureños gangs.

“The Mexican Mafia did not want Sureños cooperating against them, informing on their criminal activities. So Chavez used his skill set as an attorney to find out who was cooperating …to hunt down Sureños who the Mexican Mafia thought to be government cooperators. Like a Sureño named ‘Danger,’” Bernstein said.

The attorneys’ opening statements Wednesday afternoon before U.S. District Judge George Wu in Los Angeles kicked off the first trial in two criminal indictments unveiled in 2018 against the Mexican Mafia, including Jose “Fox” Landa-Rodriguez, who prosecutors said controlled LA jails from the inside. Zendejas-Chavez was among 83 people charged, and prosecutors singled him out in their press announcement, stating that attorneys “are particularly valued members of the operation because attorney-client privilege can serve as a shield to conceal criminal activity from law enforcement.”

Federal agents dubbed the investigation “Operation Dirty Thirds,” a reference to a tax the Mexican Mafia levied on inmates not affiliated with gangs who tried to sell narcotics in the jails.

Chavez, a licensed attorney in California since 2008, has been out of jail on bond but required to wear an ankle monitor. The state bar added a warning to his attorney page that says he’s been charged with a felony, but the indictment hasn’t hindered his practice completely. Last October, his alma mater Irvine University College of Law featured him as the keynote speaker in an informational session for prospective students hosted on Zoom. The dean of the Cerritos-based, for-profit college, George Leal, told Law&Crime he did not know Chavez was under federal indictment when he was invited to speak at the event.

“Mr. Chavez was invited to speak to discuss his personal experience as a student at the law school, and his efforts to take and pass the California Bar exam. He never informed me nor my staff of his indictment,” Leal said in an email. “Given his right to the presumption of his innocence, I expect you will report accurately what I have confirmed above to the extent it has relevance to his indictment and upcoming trial.”

In his approximately 20-minute opening, Bernstein said Chavez exploited his attorney-client privilege and “aspired to have a hand in the most extreme forms” of Mexican Mafia violence, including gang demotions and murders. He worked with Landa-Rodriguez “not as an attorney, but as his criminal associate,” Bernstein said, and hosted Mexican Mafia meetings at his law office.

Blanco described much of prosecutors’ evidence as shoddy or simply not there, including an allegation that Chavez was paid $200 to fly to Colorado to put $400 on the books of two men incarcerated at the federal supermax prison in Florence, Colorado. Such deposits are actually impossible, she said.

Blanco also previewed a surprise defense witness who is involved in his own prolific, gang-related litigation: David “Lil’ Dave” Santillian, the president of the Mongols motorcycle club who is accused in a separate case of secretly working with federal agents during the Mongols’ 2018 racketeering trial.

Chavez is accused of helping facilitate an extortion scheme by the Mafia against the Mongols, but Blanco said Santillian will testify “he has no idea who Chavez is” and that there was no extortion attempt, despite federal agents’ attempts to drum one up. She called the plot “a real sexy story” that could land investigators “on the cover of the New York Times or LA Times.” It wasn’t true, Blanco said, but it was “something that agents just held onto.”

The first witness on Wednesday was Christina Alanis, an employee at the maximum-security Pelican Bay State Prison, who described how Chavez tried to bring a note inside the prison in 2014 but was stopped by a guard. He acted as if he was going to put the note in a locker, Alanis said, but then put it back in his pocket and told the guards he didn’t trust them. They ended up shredding the note, the employee testified, and she thought it “seemed very peculiar as to what was so important on that piece of paper.”

“Never before had I had somebody be so adamant to want to get rid of a piece of paper,” Alanis said.

“In your 11 years working at Pelican Bay, did you ever seen anyone else try to engage in the same type of behavior that Defendant Chavez did?“ asked Assistant U.S. Attorney Gregg Marmaro.

“No, I did not. It seemed very suspicious,” Alanis answered.

Blanco emphasized in her cross-examination that Alanis has “no idea what was on that piece of paper.”

Testimony continues Thursday at 9:30 a.m. The trial is expected to last three weeks.