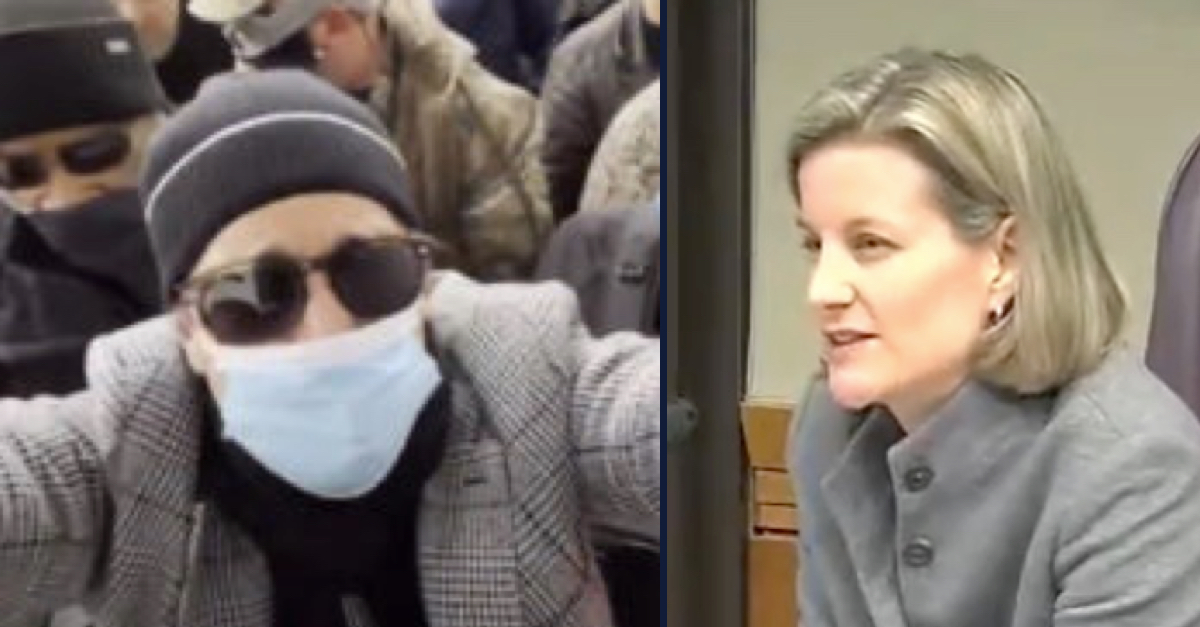 Left: Brandon Straka, (via FBI court filing). Right: Judge Dabney Friedrich in 2016, at a hearing for the U.S. Sentencing Commission (via U.S. Courts).

Vocal Donald Trump supporter and convicted U.S. Capitol rioter Brandon Straka may find himself in hot water with the judge overseeing his case after making statements in public that appear to contradict what he had previously said in court.

Straka, who was sentenced in January to three years of probation, including three months of home detention, after pleading guilty in October to a misdemeanor disorderly conduct charge, has been cooperating with the government’s prosecution of the Jan. 6 attack, when Trump supporters rushed the building in an effort to stop Congress from certifying Joe Biden’s 2020 electoral win.

Straka is the founder of the so-called “WalkAway Campaign,” which encourages voters to leave the Democratic Party and support Trump.

The fact of his cooperation has been known since December, before he was sentenced. The extent of the cooperation, however, was only recently revealed — apparently by accident.

According to prosecutors, Straka provided information about Ali Alexander, who, according to the government, “is viewed by many as the preeminent leader of the Stop the Steal movement.”

“Mr. Alexander may have had direct contact with the Executive Branch of government and other government officials who are sympathetic to the Stop the Steal movement concerning the orchestration of the events leading up to January 6,” the prosecution’s memo says.

Straka also is said to have provided information about Simone Gold, described as a “rabid Stop the Steal supporter.” Gold was charged with felonies and misdemeanors in connection with her breach of the Capitol; she was recently sentenced to two months in jail.

Straka also allegedly alerted prosecutors to the alleged participation of Gavin Crowl in the Jan. 6 attack. According to the government, Crowl is a convicted sex offender whose presence at the Capitol was not previously known.

When news of Straka’s cooperation was reported, Straka reportedly received threats that he would “go to [his] grave as a traitor[.]”

Judge: “I Did Not Need the Kind of Detailed Information” Included in the Sealed Documents

On July 26, U.S. District Judge Dabney Friedrich had ordered the court clerk to unseal four motions, filed between December and January, to file certain documents under seal. The judge did not order that the attachments to those motions — attachments that contained what she described as “sensitive information” — be unsealed.

According to Friedrich, however, that’s exactly what happened: on July 27, the documents were posted to the public docket.

Friedrich, a Trump appointee, said the clerk’s officer realized its mistake after 28 minutes, and immediately placed the documents back under seal.

Friedrich told defense attorney Bilal Essayli and Assistant U.S. Attorney Brittany Reed that she had seen internet rumors that members of the media had received a “bulk email from the court with the unsealed documents attached,” and asked the lawyers if they had any additional information as to those claims.

“I don’t have any additional information, Your Honor,” Essayli said, adding that he had not investigated the matter himself. “I appreciate the attention the court has already given this and I know this is a matter the court takes seriously.”

Reed said that the government also didn’t have anything to add regarding that particular internet rumor.

“We do not have any information to support these statements that are being said online,” Reed said.

While Friedrich acknowledged that fault in unsealing the documents belongs with the clerk’s office, she had strong words for the attorneys in the case, reprimanding them for filing documents containing such sensitive information on the docket in the first place, even though they were meant to remain under seal.

“Both parties bear responsibility for this problem by unnecessarily putting highly sensitive information on the court’s docket that the court did not need or ask for,” Friedrich said. “I did not need the kind of detailed information that was contained in both the government’s motion to seal with the attachment, or the defendant’s motion to seal, which also had an attachment. These attachments … contain highly specific info that wasn’t necessary, including names of individuals who were under invest by the government.”

Friedrich said that while she and the clerk’s office “deeply regret” the fact that the documents were accidentally unsealed, “the parties need to exercise due care” with such sensitive information.

“For individuals who are cooperating with the government, at times at great risk to their personal safety, I don’t understand why the government isn’t more careful about what it puts on the docket,” Friedrich mused.

“The government bears some responsibility here,” she added — but prosecutors weren’t the only target of her ire.

“I also think the defense bears some responsibility here,” the judge said. “It doesn’t excuse the mistake, I’m not pointing fingers … [but] the parties could have prevented the fallout from this human error. Human error is going to happen from time to time, even computer errors[.]”

“There should be a presumption that you don’t put this type of information on the docket unless the judge asks for it,” Friedrich added.

Friedrich said that she wants the parties to brief her on whether the documents should still be kept under seal going forward.

“He Knows What He Said in Those Debriefings.”

The judge then turned to the matter of Straka himself, who on July 29 posted a lengthy missive on the social media website Gettr, insisting that he had done nothing wrong and pushing back against the “‘snitch’ narrative.”

“To me, making the choice to sit down and answer questions was a no-brainer – nobody I know committed any crimes and I have no evidence of any criminal wrongdoing from anybody,” Straka said. “I have maintained that since the beginning. Why would I not sit and answer questions about how my friends did nothing wrong?”

“There is NOTHING WRONG with talking to the DOJ and telling them your friends are innocent,” he added. “And if any of my friends were in the position that I was in, I would HOPE they would convey that I did nothing wrong too.”

Straka did not appear at the hearing; Essayli said his client was traveling and not able to attend.

“Mr. Essayli, it has come to my attention that Mr. Straka has been making questionable comments as to the truth of his plea and the nature of his cooperation,” Friedrich said, adding that she would “gladly hold an evidentiary hearing to address his claim.”

Essayli demurred, implying that his client has not made “questionable comments.”

“That’s hard to reconcile with what has presented to me,” Friedrich said, adding that it is “definitely not in [Straka’s] best interest” to make contradictory claims in public.

“He needs to understand he faces exposure for making false statements to federal officers,” Friedrich said. “I suggest you tell him to exercise discretion that he didn’t before Jan. 6, during Jan. 6, and after Jan. 6[.]”

Friedrich said that she will be asking the probation office for status reports to make sure he is complying with the court’s conditions.

“I hope he will take my prior orders on supervised release — and what I’m saying here — very seriously,” she said.

“I have no reason to believe he doesn’t take it seriously,” Essayli replied. “He has done his best to comply.”

Friedrich said that based on reports she as received, Straka is potentially incriminating himself.

“Please inform him that these are not wise choices he’s making,” she told Essayli. “I would have thought based on what he said to me at time of sentencing that we would not be having this conversation right now. It makes me question every statement he made to me at the time of sentencing. Every single one of them. He’s losing credibility with every passing moment.”

Essayli said that his client is a “public figure” and that it’s difficult for him not to respond to what he feels is false or misleading reporting.

“He can view it as false reporting, but he knows what he said in those debriefings,” Friedrich shot back.

The judge said that if Straka wants to withdraw his plea “because he didn’t know anything about what he was doing” at the time, he should make such a motion.

“That’s the appropriate way to address, not by putting comments out on the internet,” Friedrich said. “I will be happy to hold an evidentiary hearing and hear his side.”

“I can assure you, he does not want to withdraw his plea,” Essayli said, pledging to emphasize the judge’s comments to his client.