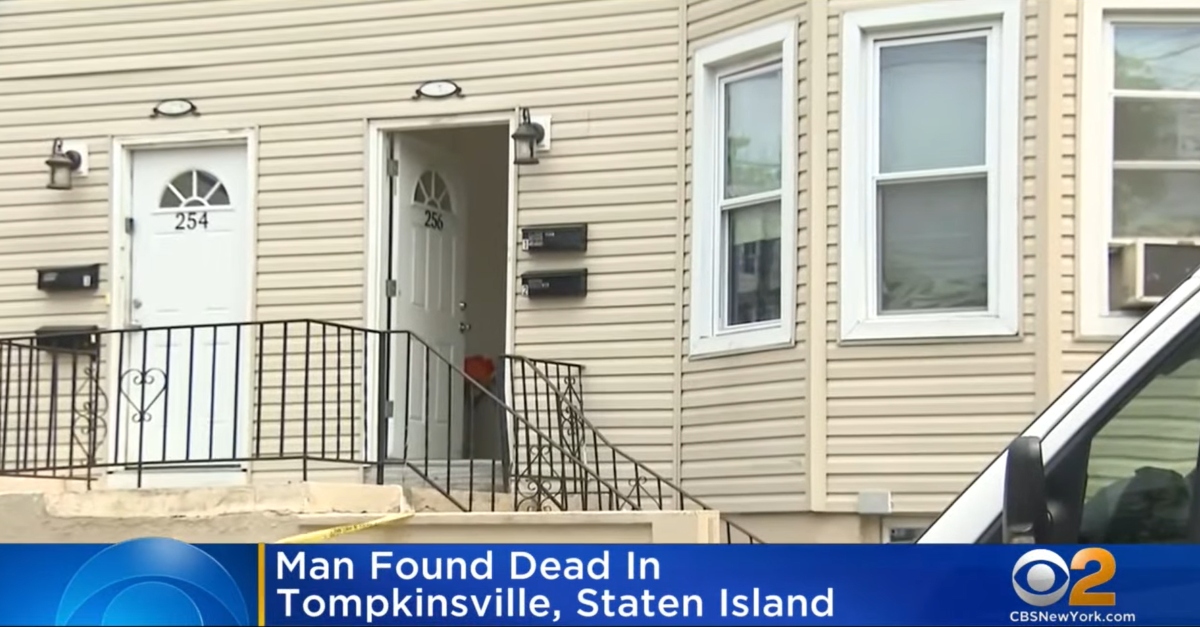 Months ago, New York City cops walked in on a surreal crime scene. An elderly man was beaten to death, and a vile accusation was written in black marker on his chest: “I touch little girls.”

Now police say the man’s health aide was the person who killed him, according to The New York Daily News. Suspect Rene Ayarde, 28, was already on the law enforcement radar; she was arrested for physically abusing her young daughter just hours after Robert Raynor, 80, was found dead.  Ayarde and her 3-year-old lived with the victim, the newspaper reports.

A live-in home health aide has been charged with the murder of a Staten Island man under her care — a bizarre homicide in which “I touch little girls” was scrawled across the bare chest of the fatally beaten octogenarian.https://t.co/EMvATe6ylH

Cops said the murder happened as the octogenarian’s home in the Tompkinsville neighborhood of Staten Island, according to the Daily News. A neighbor discovered the body; the the statement “I take dolls in my room for girls ages 1-5” was also written on Raynor’s stomach. “I touch” was written on a foot, sources with knowledge of the investigation said.

Raynor reportedly had a rather extensive arrest record for cases such as assault, drug possession, and other minor offenses. He had no apparent history of sex crimes and did not appear on either the state or the national sex offender registry, the newspaper reported.

The victim’s daughter, Carolyn Whetstone, emphatically denied that her father had ever done anything to match the accusations scribbled on his body. She remembered Raynor not as a sexual abuser, but as a person who liked to joke around and have fun. He would never commit abuse, she said.

“That’s not my father,” she told the Daily News from North Carolina shortly after the murder. “He would not touch a child. He would never violate anyone. He’s got daughters and granddaughters that he’s watched when he’s come to visit me . . . That’s not him. That’s not true.”

She described Raynor as being in deteriorating health: he had cancer, lived with arthritic knees, and could barely move when she spoke to him the previous month. Whetstone said that her father was physically unable to commit abuse.

“That mess she wrote on his chest is not true,” Whetstone said in July — accusing Ayarde of murder long before the authorities did. “She wrote that on him to justify what she did, which you cannot justify — taking anyone’s life.”

Ayarde was arrested for allegedly assaulting her daughter in Manhattan. She’s accused of picking up the child, dropping her on the concrete, and throwing a water bottle at her face, a witness allegedly said, according to the Staten Island Advance.

Ayarde then allegedly tried to stop another witness from calling 911 by grabbing the woman’s phone and knocking her to the ground.

“Are you calling the police?” Ayarde allegedly said. “Give me your phone.”

The child sustained bruising; an examination is said to have revealed injuries in different stages of healing to the girl’s neck, knees, face, and cheek.

“I was outside, and mommy threw me on the floor,” the girl said, according to court documents cited by the Daily News.