Woman Forced Tinder Date into Bed, Stabbed and Choked Him, and Threatened to Kill Him If He Screamed When DoorDash Arrived: Cops 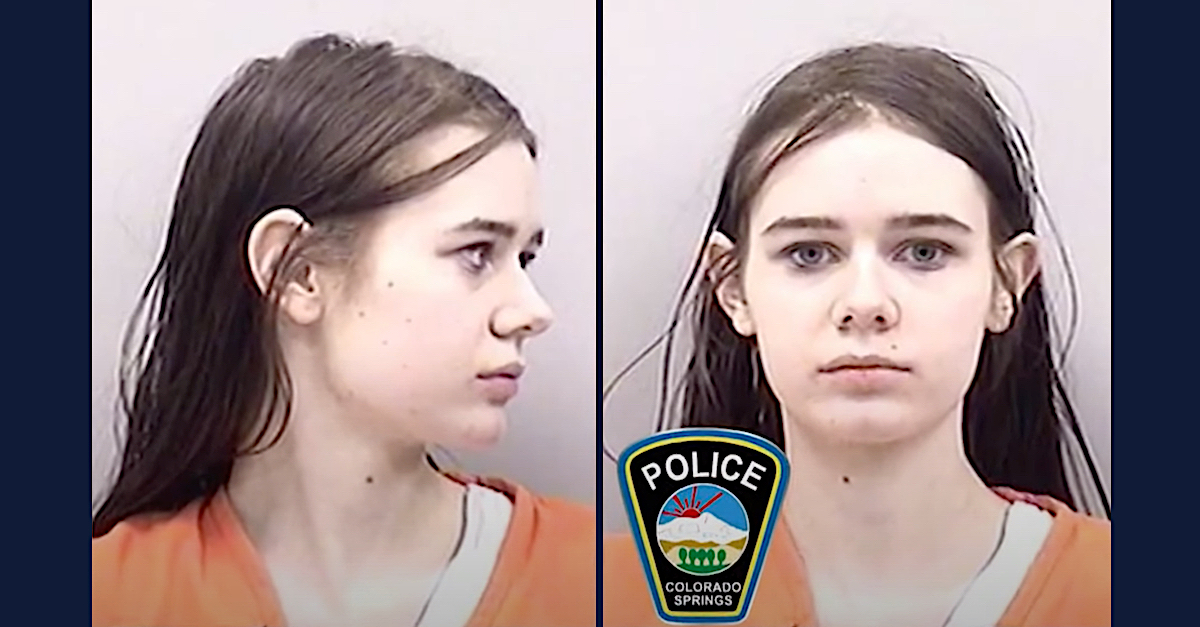 A 22-year-old woman in Colorado is facing multiple felonies for allegedly binding her Tinder date with duct tape and then stabbing and choking him several times before he was able to free himself. Lauren Marie Dooley was taken into custody last week and charged with one felony count each of second-degree kidnapping, second-degree assault, and menacing, records reviewed by Law&Crime show.  She was also charged with one misdemeanor count of false imprisonment, those records indicate.

According to an affidavit for probable cause, officers with the Colorado Springs Police Department at approximately 5:43 p.m. on Sept. 28 responded to a residence located in the 2500 block of E Cache La Poudre Street to investigate an unknown call for assistance.

The emergency dispatcher told the officers that they were on an open line with a male caller and a female could be heard in the background, police say. The dispatcher further advised that they could hear the male — later identified as the 21-year-old victim — say he was “bleeding all over the bed.” The male subject then was heard telling someone “because you cut me” and “you’re going to kill me,” the document states.

The name of the 21-year-old man is redacted in the affidavit.

“Upon our arrival, residents at the apartment advised there was a naked male in the parking lot that needed help,” the affidavit continues.  “Officers located [the victim] who was naked and appeared to be bleeding from a laceration on his left arm.  [He] was also actively backing away from the suspect . . . Dooley . . . who appeared to have blood smeared on her arms and hands.  [The victim] exclaimed that Lauren tied him up and cut him.”

Dooley “invoked her Miranda Rights” and refused to talk, the affidavit says.

Police say the victim told investigators that he had “just met Lauren [Dooley] on Tinder” and agreed to meet her at her apartment. After he arrived, he said he and Dooley sat on her couch and talked for a bit before Dooley took off his clothes and performed oral sex on him.

“She then used duct tape to bind [the victim’s] wrists together and ankles together,” the affidavit states.  “[The victim] found it odd, but consented to it. However, when Lauren produced a kitchen knife and demanded he get into her bedroom, [the victim] no longer consented to staying at the residence.”

That’s when the encounter allegedly became violent.  Again, from the affidavit:

Fearing Lauren would harm him with the knife, he obeyed and got into her bed. Lauren climbed on top of him and proceeded to use the knife to cut his left shoulder. Lauren then used both her hands to apply direct pressure [the victim’s] to throat for approximately 20 seconds, making it difficult to breath. Lauren stopped, but only to procure a belt that she then placed around [the victim’s] neck. She tightened the belt for another 20 seconds, once more making it difficult to breath. When she took it off, she checked [the victim’s] neck for a pulse.

The alleged victim told police that Dooley became upset because he was “bleeding all over her bed,” so she forced him into the bath tub. Dooley then ordered food from DoorDash. When the delivery person came to her home, Dooley told the victim, “If you scream or say anything, I’ll kill you,” the affidavit asserts.

After eating, Dooley allegedly got into bed with the victim, pulled a blanket over both of them, and fell asleep. According to the affidavit, the victim said he felt Dooley’s knife under the blanket near his feet, so he somehow used it to cut his bonds. He accidentally woke Dooley when he bumped into a table, but he was able to get outside and call for help, according to the police.

“When officers conducted a cursory sweep of [the] unit . . .  to see if there was anyone else that needed medical assistance, they observed a kitchen knife near the bed, several blood soaked rags and blood all over the bathtub,” the affidavit states.

Dooley is currently scheduled to appear in El Paso County court for a hearing on Oct. 6.

Read the complete affidavit below.