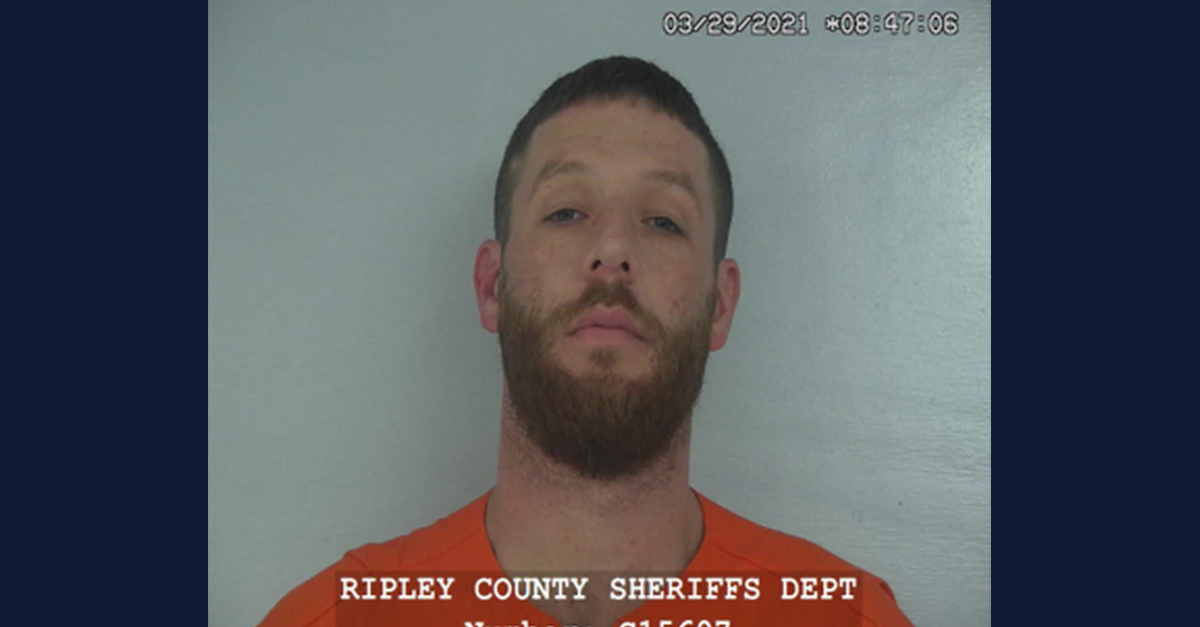 An Indiana man was convicted over the brutal 2021 murder of his ex-girlfriend on Monday after several pauses in the court process.

Jordan Knudson, 37, was found guilty by Ripley County jurors after just over two hours of deliberation and an 11-day-long trial.

According to police and prosecutors, Kristina “Krissy” Jones was 36 years old at the time her ex-boyfriend shot her multiple times in the head on the night of Jan. 10, 2021. The incident occurred at the home of the victim’s friend, Rodney McEvoy, who arrived home just after midnight and found the victim in his bathtub, covered in blood.

Rodney McEvoy rushed out of his house and ran to his parents home, less than 100 yards away, next door–screaming and telling them they needed to come to his place immediately because something was wrong with his friend. His mother, Marilee McEvoy, attempted to perform CPR but to no avail. She called 911 at 12:11 a.m.

“I was just hoping I could breathe some life into her, but it couldn’t be done,” the elder McEvoy, who is a nurse, told the Osgood Journal in a March 2021 interview. “Nobody deserves this.”

Though the murder was committed in the Hoosier State, an autopsy was performed by Hamilton County, Ohio, forensic pathologist Gretel Stephens. The cause of death was determined to be multiple gunshot wounds to the head caused by a .410 caliber gun.

The defendant was arrested in late March three days after a warrant was issued by Ripley County Circuit Court Judge Ryan King.

A charging affidavit offers a window into the investigation:

Jordan Knudson’s parents, Norman and Pina Knudson, purchased a Mossberg 500 .410 pump shotgun and three boxes of .410 shotgun shells at the Walmart in Greensburg, IN. That purchase took place on July 14, 2020. Norman and Pina Knudson last saw that weapon on December 24, 2020, when Jordan placed it and some of the ammunition inside the home. Norman disclosed that he became aware this .410 shotgun was missing from the residence as of 1-11-2021, along with a box of .410 shells.

When interviewed by detectives with the Indiana State Police, Knudson disclosed that he had owned and later sold a sawed-off .410 shotgun with the serial numbers removed. He claimed this was a different weapon from the one his parents had purchased. Days later, the ISP received an anonymous letter suggesting someone may have had possession of the shotgun police were looking for. An examination by the ISP laboratory determined the letter contained a latent fingerprint. Additional examination found that the fingerprint belonged to the defendant, according to the Greensburg Daily News.

Knudson also told detectives he last saw the victim sitting at a picnic table at the Holton Food Mart on Jan. 9, 2021, where he had dropped her off after she stayed over at his place the night before. Angie Miles, an employee who worked there, however, said she received a phone call from a frightened Jones just after 5:00 p.m. that day. Jones was locked inside Miles’ white SUV, hiding because was scared of Knudson, the employee told police. Jones eventually received a ride from a customer to the McEvoy residence.

The last time Krissy Jones was seen alive was by a friend who left the McEvoy trailer around 9:30 p.m. on the night in question.

She was gunned down in the bathtub hours after having dinner with her two children, prosecutor Ric Hertel said during the trial.

Police say the defendant told a quickly disproven lie about his whereabouts on the night Jones died. Knudson claimed he asked Jones if she could obtain “dope” from a mutual friend. After she told him to get it himself, Knudson told police, he took her advice and went on to pick up and use the drugs at the  friend’s garage before Rodney McEvoy and Jones showed up together. All four of them went on to use the drugs, Knudson told police. The fourth individual, when questioned by police, said they hadn’t seen Knudson in months.

The alleged drug provider also denied seeing Jones on the night of her death. When later questioned again by police, Rodney McEvoy also disputed Knudson’s version of events–saying he wasn’t there either.

The defendant entered a not guilty plea during his initial court appearance, according to the Madison Courier. He maintained his innocence throughout the serially delayed process.

On Dec. 15, 2020, Jones went to an emergency room complaining of pain and knots on the left side of her head. She told medical staff that night: “he hits me in the head ’cause it doesn’t bruise as bad.”

Jones obtained an ex parte protective order against Knudson over that abuse. But though three separate efforts were made, the eventual killer was never served with the protective order. He would later tell police he was aware of the order and his parents confirmed that their son had evaded the legal paperwork.

Evidence presented to jurors showed the defendant had also made several threats against Jones’ life on social media.

More than 20 witnesses took the stand for the prosecution over the course of the trial. Knudson is currently slated to be sentenced in June of this year. He faces a sentence of 45 to 65 years in prison.