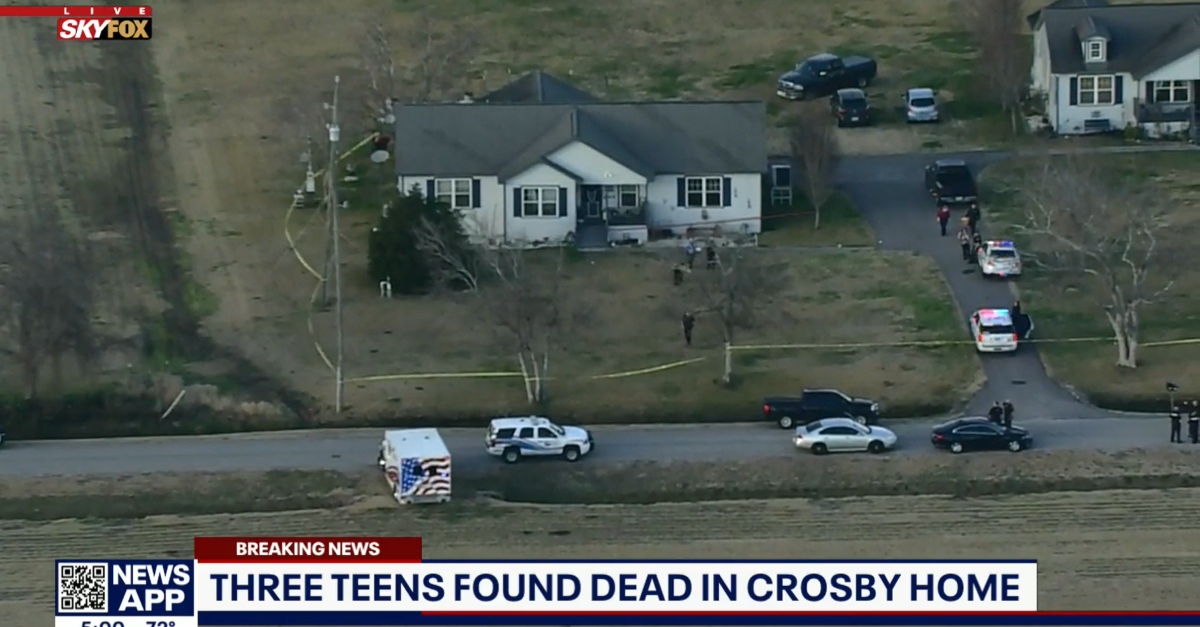 Site of the apparent double homicide, and suicide.

Investigators shifting through the evidence after a family member found three teenagers dead at a Texas house. Emphasizing that their work was in the preliminary stages, Harris County Sheriff Ed Gonzalez told reporters Tuesday that this appeared to be a double homicide and a suicide. Investigators found a gun in the home that deputies believed was used in the incident, but the sheriff declined to describe the nature of the injuries. He only identified the dead as two girls, possibly 17 years old, and a boy, possibly 15 years old. Officials did not say who they believe killed whom.

The incident happened on the 4500 block of Wolcik Road in the community of Crosby, which is less than a half-hour drive northeast from Houston.

Media briefing from Sheriff Ed Gonzalez on the teens found deceased at a residence in the 4500 block of Wolcik in the Crosby area. #hounews https://t.co/BuKMImx4bR

Pct 3 & HCSO units are at a scene at the 4500 blk of Wolcik (Crosby area). Preliminary: the deceased bodies of three teens have been discovered inside the residence. There are signs of trauma. Homicide & CSU enroute. I’m headed to the scene. #HouNews pic.twitter.com/gOcHy5x3bd

According the sheriff, the preliminary investigation showed that a family member who lives next door was trying to locate someone, arrived at the home, did not get a response, and then gained entry to the residence, where the bodies were.

The teens were possibly last seen the night before, the sheriff said. Investigators did find a firearm at the residence that appears to have been used in the deaths, but the sheriff declined to elaborate on whether it was a handgun or long gun. He also declined to detail the nature of the injuries the teens sustained. The motive and connections between the three remain under investigation, he said.

“We don’t know the full connection at this point,” the sheriff said, when asked if anyone was dating. He said two may be related, and the third may be an acquaintance or a friend. He wanted to get more information before confirming that, however. Investigators were working on speaking to family members to understand the dynamics. The homeowner had been out traveling, so he was not in a position to name the teenagers, he said.

“I think once we put the pieces together, motive is always something that tends to reveal itself at some point, and sometimes, it makes no sense,” he added. “These are all senseless at the end of the day when you’re talking about the loss of life of young people. It’s tragic.”

The deaths shocked neighbors. It was out of character for their area, they said.

“It’s really surprising to see something like this happen out here to one of us,” neighbor David Givans said, according to KHOU. “It’s a close community for the most part. We all watch out for each other.”

Another neighbor identified as Big Rob told KRIV he lived nearby for seven years. He spoke well enough for the people who lived at the home.

“They’re very nice people as far as I know,” he said. “I wouldn’t think anything like this would happen.”