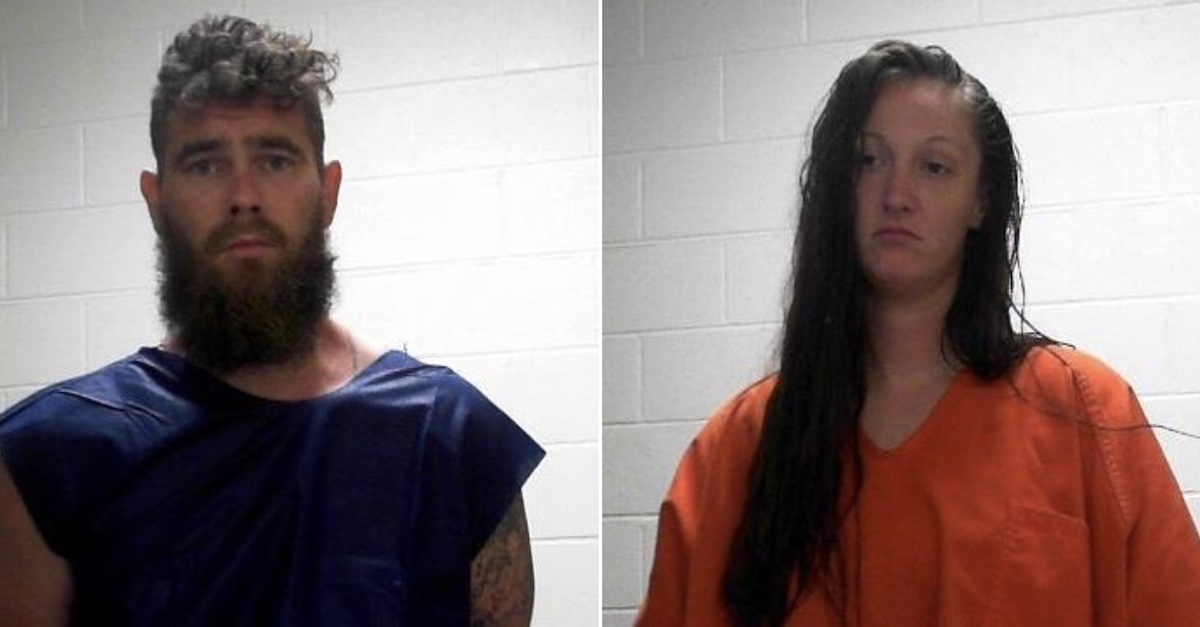 A 32-year-old man in Oklahoma and his 31-year-old girlfriend were arrested this week for allegedly killing a toddler and burning the child’s remains, authorities announced. Chad Holden Jennings and Ashley L. Penner were taken into custody Wednesday and charged with a slew of felonies in connection with the death and disposal of the child’s body.

According to a press release, the Seminole Police Department at approximately 11 p.m. on Tuesday received a tip about the possible murder of a toddler at a secluded location off of Old Highway 99 South. Within hours of the tipster’s call, investigators obtained and executed a search warrant early Wednesday morning at 148 Old Highway 99 South in Seminole. Upon arriving at the scene, officers discovered the burned remains of a toddler, the department said.

Detectives investigating the circumstances of the child’s death were led to a home located in the 1300 block of Timmons where Jennings and Penner both lived. The press release referred to the address as “a crime scene.”

At the request of Seminole PD, the Oklahoma State Bureau of Investigation (OSBI) assisted the department with processing the two crime scenes. Personnel with the Medical Examiner’s Office also responded to the crimes scenes and will be assisting investigators in determining the identity of the victim and the cause of death. Agents from the U.S. Bureau of Alcohol, Tobacco, Firearms, and Explosives (ATF) will be assisting with the ongoing investigation as well.

According to Oklahoma court records, Jennings has previously had several run-ins with law enforcement. In 2018 he was charged with domestic assault and battery in the presence of a minor and pleaded guilty the following year. Several months later, Jennings was charged with domestic abuse – assault and battery to which he also pleaded guilty. Court records also indicate that a state judge ordered Jennings to pay child support for a 3-year-old boy in 2019.

The instant cases involving the death of the child are so new that they do not yet appear on an Oklahoma court database.

A spokesperson for the OSBI said the facts of the case were particularly difficult to process.

Arbeitman explained when the identity of the victim may be released.

“Until the child is identified positively by the Medical Examiner and next of kin notifications can be made to any family members, we can’t speculate on who the child is or the relationship between those that are were arrested,” Arbeitman reportedly told the station, adding, “When a child is murdered, it’s jut really hard.”

The OSBI and Seminole Police did not immediately respond to a messages from Law&Crime.